You hear of Breedlove’s impressive career in football, and then you meet him. Eyeing his broad shoulders and slender physique, you immediately think quarterback. Or maybe he’s developed muscle over a lean frame since his playing days, and he used to play receiver or kicker.

Then you find out he played on the offensive line and suddenly nothing makes sense.

In a sport of giants, the thundering landmasses of the offensive line are the professional roadblocks. These are men whose ponderous bulk spills out of their pads and jerseys, the leviathans of the gridiron whose job is to stand in one place and move for no man. And Kevin Breedlove used to be among them. You look at him now and you look at him during his playing days and it’s hard to believe it’s the same person.

“That was about 100 pounds ago,” he said with his trademark wide, easygoing smile. “I was always a big kid. But at 300 pounds you’re strong, yeah, but you’re just huge. You’re carrying too much.”

Like many of his colleagues on the O-line, Breedlove had always followed a steady course of diet and exercise to maintain his massive size. He said it wasn’t uncommon to be asked to pick up a quick five pounds or drop a quick 10 to hit certain weight guidelines during his playing days, and he found it easy.

But once his football career had ended, he got a wake-up call during a routine visit to a neurologist. As a former football player, he was being tested for any lingering effects of the head trauma that inevitably comes with the game, from early-onset Alzheimer’s to Chronic Traumatic Encephalopathy (CTE), a degenerative brain disease found in athletes.

“The neurologist told me, ‘I don’t want you to worry about any of that. You’re going to be dead long before any of those problems. The weight is going to kill you,’” Breedlove said. “That kind of wakes you up right there.”

Having left the game, Breedlove was then teaching and had unfortunately, never adapted his eating habits to a life where he wasn’t regularly called on to do two-a-days.

The result was that at 300 pounds, he had ultimately lost weight, but only because his muscle had been slowly turned over to fat reserves. Rather than turn to a crash diet, he began his transformation through a series of small steps (see sidebar). He watched calories and gradually increased his exercise with the intention of simply feeling better and as he puts it “living to 100.” Along the way, as it turned out, he wound up discovering underneath that offensive lineman was someone much healthier. In time he opened up his own gym on Hilton Head Island, Odyssey Health Club.

“It became this really great journey, an odyssey so to speak,” he said, sneaking in a plug with a wry grin. “Originally it wasn’t about losing weight. My goal was just to live as long as possible. . . . Since then, all these wonderful things started happening.” 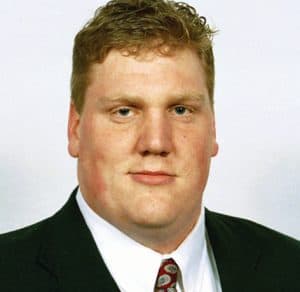 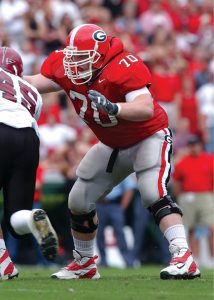 There is one caveat you should know before learning how Kevin Breedlove was able to escape the shape of a football player: Your mileage may vary. As he stated, “What works for me is not guaranteed to work for anyone else.” That said, if you’re interested in how Breedlove set out to simply prolong his life and wound up shedding triple-digits worth of fat, read on.

RUN THE NUMBERS “I looked at this and said, ‘OK, I’m an analytical guy, I can figure this out. It’s calories in vs. calories out.’” Starting with the notion that a pound is 3,500 calories, he began looking at his diet and seeing where he could simply cut a few hundred calories here or there. Then, he began incorporating more exercise into his routine and counting what calories he could burn in 30 minutes or an hour.

CONTROL WHAT YOU EAT One trick to short-circuit overeating is filling up with a small portion of something low in calorie to curb your appetite — like a few ounces of chicken breast, glass of V8 juice or water — 30 minutes before eating. “It takes 20 minutes for your brain to even recognize you’re starting to eat,” he said. “You fill up, and the best part is you get to eat something you enjoy without overeating.”

PLAY THE LONG GAME As Breedlove never intended to make this lifestyle choice specifically for weight loss, it was never tied to a particular deadline. And that may be why it worked so well. “It’s not instant gratification,” he said. “But I didn’t put the weight on overnight. If it took me 30 years to put it on, I had to realize it’ll take 3-4 years to take it off.”

DON’T GET DISCOURAGED The holidays were approaching as we spoke, and Breedlove recognized that he would most likely put weight back on thanks to Christmas cookies and holiday cheer. And that was OK. “You want to make sure you don’t overindulge, you don’t want to fall back in,” he said. “But if you do, don’t beat yourself up. You have time.”

[1] His first (and only) touchdown “Back in middle school. There was a batted down pass and somehow or another I wound up with it. And again, I was a little bit bigger than your average middle schooler and not exactly fleet of foot. I remember just trucking it down the field and I score a touchdown. A lineman getting a touchdown – it never happens. I never scored a touchdown again; never even landed on a fumble again. It was quite a sight. I still have it on VHS.”

[2] His painful introduction to SEC football “I was 18, lucky enough to start as a freshman at UGA. We’re playing LSU – not a great game for your first start in the SEC. The first drive I had eyes big as saucers; I was scared out of my mind. The first play, I get ready and do one of those quick shoves before the snap and get just lit up by the defensive tackle. Just ‘boom,’ and I’m knocked on my butt and rolling backwards. The announcer literally comes in and says, ‘Welcome to the SEC, Kevin Breedlove.’ It was a very humbling experience. Of course, Mom and Dad recorded the game. They’re like, ‘You don’t want to watch it. Ever.’”

[3] Meeting dad in the end zone “In college I got to play in the SEC championship and we won. It was in the old dome, in front of 70,000 people. . . I remember I’d run into the end zone and sit down, thinking I gotta take this all in. This is once in a lifetime. And there’s my dad. Right there (in front of) 70,000 people and there’s my dad right there. He sees me, I walk over, he walks down and I just give him a big hug. That was an incredible moment because I got to share it with my dad. He’s been my biggest cheerleader ever since I was a little kid. … If I had been 50 feet farther down I’d have never seen him.”

[4] The bittersweet joy of cut day “I was an undrafted free agent when I came to San Diego. There’s a cut day and they tell you that you need to be in your room at this time on this day. And if the phone rings, you’re cut. If you don’t get a call by this time, you made it. I had a roommate at the time, an awesome kid, Alex Tuttle. We got the call and he got cut. First I was scared, because which one of us is it going to be? Then I felt great because it wasn’t me. Then I felt horrible because it’s my buddy. But all of the sudden it was 10 o clock. I made it … I’m a Charger.”

[5] The only time a lineman wants to hear his name “I still remember the first time I got to run out of that tunnel in the NFL. And they actually say your name, because they don’t do that in college. ‘Now playing at right guard, number 67 Kevin Breedlove.’ It’s just a moment of, ‘did that really just happen?’ You can’t ever describe it. It was everything I’d worked for – when I was a kid they asked what I wanted to be when I grow up. I wanted to be a pro football player. I’d tell you that if you ask when I was 5 or 25. In that moment, I’m just thinking, ‘Oh my gosh. I’m a pro football player. This is incredible.’”