The once-and-future Hootie & The Blowfish front man opens up about his golf game, his history on Hilton Head Island and his monster year ahead.

If you were around Hilton Head Island in the late ‘80s and early ‘90s, you knew Darius Rucker as the lead singer of an up-and-coming rock band called Hootie & The Blowfish. Back then this unknown group played at dive bars and stages on the island and across South Carolina, making a name for themselves in the Palmetto State and waiting for their big break.

If that’s the last you heard from Darius Rucker, you’re in for a treat. Those years of paying dues on the road scored huge dividends, with Hootie and The Blowfish’s debut album, “Cracked Rear View,” becoming one of the most iconic records of the decade. Topping the charts, winning a Grammy, a permanent spot in the cultural consciousness, the whole nine yards.

It worked out pretty well for Rucker, as well, with his post-Hootie reinvention as a country music star resulting in yet another Grammy, for his cover of “Wagon Wheel” (a song you might recognize from every time you’ve stepped into a bar in the last six years).

His annual Darius Rucker Intercollegiate Golf Tournament has become a staple of the island’s calendar, and his old band recently announced a blockbuster reunion tour. Despite all his success, Rucker still remains a proud son of South Carolina, despite industry expectations that he’d relocate to the cultural capitals of LA or New York.

“This is home! New York – have you ever been to New York in the winter? No thank you,” he said with a laugh. “I’m lucky that I get to see so much of the country with my career, and I am in those cities quite a bit, but at the end of the day South Carolina is where I want to call home forever.”

That South Carolina pride is evident in everything Rucker does, from his fervent USC fandom to his choice to launch his golf tournament here.

“Long Cove is one of the best courses, if not the best, on Hilton Head and one of the best courses in the country. They do an amazing job with our tournament and we are blessed to be able to host at this course,” he said. “These women are so talented and it’s such an awesome event every year. I’m proud to have my name associated with something so great – and honestly still find it a little hard to believe they let me!”

The tournament brings together two of Rucker’s passions – The University of South Carolina (where Hootie and The Blowfish formed) and golf. “When we’re touring, I try to get out as much as possible, so that I can take advantage of being all over the country and really experience the courses in each place we visit,” he said. “I played against Charles Kelley from Lady Antebellum all summer while we were on tour together and I got tired of him taking my money, so I had to step it up.”

Adding to the excitement in 2019 is the recent announcement that Hootie and The Blowfish would reunite for a 44-city tour they’re calling “Group Therapy.” Coinciding with the 25th anniversary of “Cracked Rear View,” Rucker promises this tour will deliver everything the band’s fans have been waiting for and then some.

“It’s going to be fun. We’ve been in the studio working on a lot of new material, which I can’t wait for everyone to hear,” he said. “Of course, we’ll be playing all the classics too, so it should be a really good time. I can’t wait.”

The band will visit 44 cities on the tour, kicking off Thursday, May 30 in Virginia Beach, Virginia and wrapping Friday, Sept. 13 with a Columbia, S.C., homecoming.

“It’s been cool announcing that Hootie is going back on the road in 2019 because we’ve really gotten the chance to reminisce on those early days,” he said. “South Carolina was such an important part of our identity and still is to this day. Those early shows were where we learned everything that enabled us to be successful once things really started getting big.”

Kicking off the event will be a private Darius Rucker concert at the Arts Center of Coastal Carolina, open to players, sponsors, coaches and Long Cove residents. For questions about the Darius Rucker Intercollegiate, contact Lindsay Finger at 843-686-1074 or [email protected] 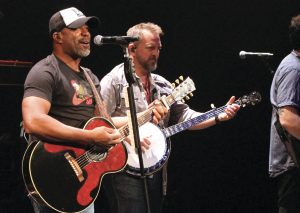 What songs and artists are you listening to at the moment? [DR] Post Malone. I’m listening to him a lot. I’m really getting into all of his stuff, and he is a guy I am really gravitating to right now.

If you were stranded on a desert island and could have only three things, what would they be?
[DR] Ice cream, music and a golf club, of course.

What is your favorite restaurant? [DR] FIG in downtown Charleston. Their gnocci Bolognese
is to die for.

What is your favorite city to visit? [DR] Amsterdam