Set on a breathtaking lot over Port Royal Plantation marshes, this stunning home bridges the gap between East Coast and West Coast. 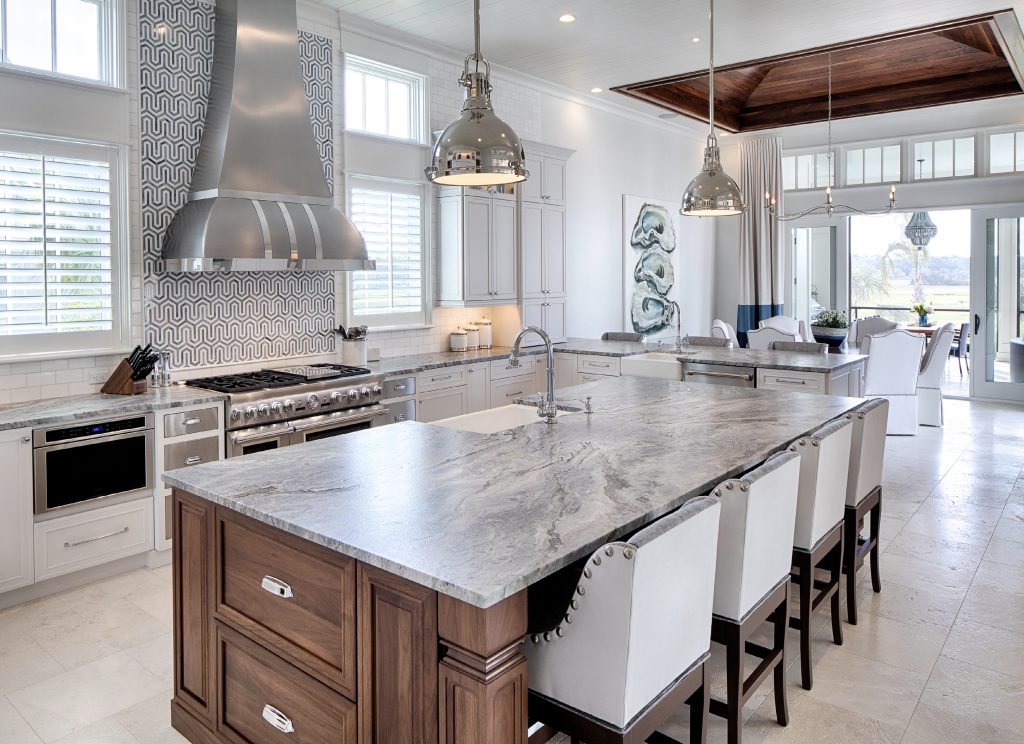 There is a tendency in home design lately to dive too deeply into what many are calling the “Palmetto Bluff” style. It’s a style that, when tastefully done, fills a home with all the sophistication and hospitality that the Lowcountry is known for.

For Leanne and Michael Jewett, it’s a style that served as an excellent springboard to a home that exemplifies the best of the Lowcountry style, while transitioning into West Coast-inspired elements that create a look all its own.

“We travel quite a bit and the homes we were seeing in Newport Beach and Southern California were quite different from what we were seeing here,” Leanne said.

They borrowed elements from the West Coast, as well as the grand traditions of classic manor homes, and brought it here to the Lowcountry to inform the style of this breathtaking home. Here, such Lowcountry elements as shiplap accent walls and oyster-shell chandeliers coexist with more traditional elements like tray ceilings and West Coast architectural flair including 12-foot ceilings throughout the home.

“The scale is consistent,” Leanne said about the extra height. “You don’t feel like one part of the house is giant. The whole house carries that same scale.”

Architecturally, it’s a subtle element that sets this home apart from the bevy of Lowcountry mansions being built across the lower 843 in recent years. Another element, one that has almost been forgotten in the era of the open floor plan, is hallways.

“We just thought a house this size and scale needed hallways. Plus, we wanted to hang some art,” Leanne said. Indicating a beautiful oversized commissioned artwork that greets visitors in the foyer, she said, “We knew for these kinds of things we needed big walls.”

The painting adds a pop of color to a color scheme that is decidedly, and purposefully, neutral. “There are really only a few colors in the house, so it doesn’t compete with the view,” said Leanne.

“We wouldn’t win that one,” Michael joked.

Indeed. The view is one of the few that can be described as spectacular. Every room in the home, save the laundry room and the dining room, enjoys an unobstructed line of sight on endless green fields of marsh grasses and snaking waterways that stretch to the horizon. For the Jewetts, who love to entertain, it was the perfect way to open a party to the outdoors. Across nearly every wall, doors can open wide to guide guests down to the spacious pool deck and the scenery beyond.

It was this scenery that first caught Michael’s eye.

“I used to mountain bike around the community and I’d always stop in this lot and think, if I could ever buy this lot, I would,” he said. Upon selling their previous home in Wexford, Michael had his realtor reach out to the owners. Within 24 hours, they had a deal. “You never know until you ask, right?”

That phone call gained the Jewetts one of the last magnificent marshfront lots on the island. And around that stunning view, they have built a masterpiece.