The brains — and the moustache — behind ‘My Classic Car’ is this year’s Car Club Showcase announcer.

It has aired without pause for 25 years, regardless of cable carrier, changing tastes or industry disruptions. It has kept its audiences rapt with fast-moving segments covering just about any topic that falls, vaguely, under the vast umbrella of car or motorcycle hobbies: collecting, building, racing, finding and restoring. Gage will be the announcer for this year’s Car Club Showcase, part of the Hilton Head Island Motoring Festival & Concours d’Elegance (Nov. 4-7). 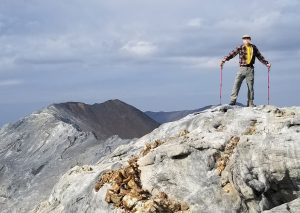 “The new format of the show premiered on the Motor Trend channel and debuted at No. 1. No. 1!” Gage exclaims. “After 25 years!” (One gets used to Gage speaking in exclamation points. He’s an enthusiastic guy.) “The show refuses to die,” Gage jokes.

Much of that success comes from Gage’s personality, which is as appealing as the cars that are featured.

“I’m a genuinely inquisitive person,” he said. “The only real skill I have is that I’m easy to talk to. And I’m extremely observant. I never want to come off as an authority. I’m just an enthusiast, just like everyone else,” he said.

And if anyone could be an authority, it would be Gage. He has been collecting, dissecting and studying cars and motorcycles since he was 12. He’s 68.

But fast-moving machines haven’t been his only career. Right out of college, armed with dual degrees in chemistry and physics, Gage played pedal steel guitar for a band that warmed up for Charlie Daniels, Waylon Jennings and Dr. Hook. Then he decided to go to graduate school, earning a PhD in chemistry. He worked for Procter & Gamble and Bristol-Myers Squibb, where several product patents bear his name.

Only after all that did he start a television show about cars and motorcycles. Oh, wait, he climbs mountains too. Literally. He scaled the Matterhorn in Oregon just this August.

“Procter & Gamble is all about branding,” Gage said. “A product has to be focused against a consumer need, and it can’t be too broad. That was drummed into us. My Classic Car is the exact opposite. It’s all things to all people. We do absolutely everything, and we’ve gotten away with it. It’s like a bumblebee. It shouldn’t be able to fly, but it does.”

Car collecting is a broad hobby, from those who like to assemble their own vehicles using parts of several others —street-rodding — to the owner of a single beloved car who camps out with a car club in a shopping center parking lot on a Saturday afternoon. Then there are those who pick among a fleet of priceless cars to join the parade at tony Concours events.

“Fortunately, collecting has mellowed a little,” Gage said. “Twenty years ago, you were a Ford guy or a Datsun guy, and you wouldn’t even look at another brand.” Now people appreciate a broader array of cars.

That expanded view has helped My Classic Car. There’s a little of everything, and no one car dominates an episode. “If you don’t like street rods or Edsels, don’t go away; there will be something else in just a minute,” Gage said.

He also makes sure the show — and the hobby of cars itself — appeals to every background.

“This can’t become an old, rich-man hobby because old, rich men die. We only do one Concours a season. Focusing only on the high-end cars would alienate some viewers. They can’t relate to that. I love Duesenbergs too, but I’ll never be able to own one. I think what appeals is the ‘everyman’ nature of the show. I’m real relatable. I want to show everything about this hobby.”

“Hilton Head’s Concours always had a better vibe. Concours events can be a little snooty or full of themselves,” Gage said. “Hilton Head doesn’t have that. Combining that with the car club collection the day before, everyone gets to play.”

It’s that accessibility that will keep car collecting going for generations, Gage said.

“The car is not going to disappear,” Gage said. “A ‘69 Camaro will always be cool. This hobby isn’t something you educate someone into. It’s emotional. The key is to make it look fun.”

“I told them that I can boil my entire life down to two words: Pay attention. There is opportunity all around you. Notice it.”

Dennis Gage, with his rogue moustache, (“I was actually born with it,” he says) unbridled enthusiasm and everyday-guy persona makes motoring hobbies look irresistible, week after week, year after year.

“We do the same thing every time, and it’s always different,” he said. Once again, My Classic Car defies the laws of science.

“This thing is Gilligan’s Island. We’ll never get off this island.” 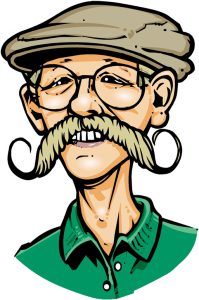 •Co-founder and now sole owner of the ever-popular show “My Classic Car with Dennis Gage.”

•Mountain climber who’s still at it at age 68

•Fan of the facial-hair styling of ZZ Top. The ‘stache is all that’s left, but it ain’t going away. His company is called Madstache.

•Owner of a 1999 Jaguar XK8 coupe and 2006 Mercedes CLS 500 along with a few other four-wheeled vehicles as well as eight motorcycles, mostly BMWs. 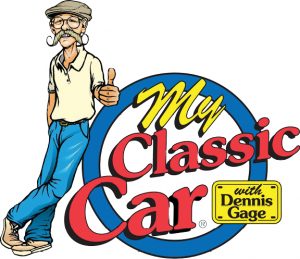 My Classic Car has been a weekly television program for 25 years. A new video is released every Saturday morning on YouTube.