Go see some fish at these Marine Life hot spots not too far from home.

Living on the coast, one might think one has a basic understanding of the ocean and the creatures that inhabit it. But even for born-and-bred islanders, the waters that seem so familiar have a formidable mystery to them. The aquarium is where we really get to see what goes on beneath the surface. These organizations pull back the curtain to reveal a whole other world just below the boat, and they can help us to get in touch with the place we call home. If you want to discover the wonder of marine life, there is certainly no shortage of nearby places to do so. Here are our favorites. 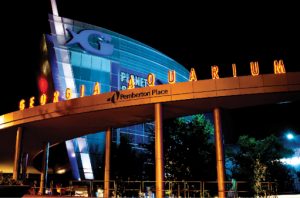 Explore the mysteries of the deep at the biggest aquarium in the Western Hemisphere. Georgia Aquarium is home to hundreds of species and thousands of animals across its seven major galleries, all of which reside in more than 10 million gallons of fresh and saltwater. The aquarium’s notable specimens include whale sharks (the largest fish known to have lived on this planet), beluga whales, California sea lions, bottlenose dolphins and manta rays. The Sharks! Predators of the Deep is the newest gallery to be added. It features a dive cage, where visitors can be submersed in the tank, and a wading pool where visitors can walk with rays and zebra sharks.

In 2019 the South Carolina Aquarium was awarded the National Medal for Museum and Library Service, “not for having a massive living collection of exotic species from around the world, but for keeping its collection’s focus local.” This Charleston-based aquarium houses thousands of species native to South Carolina, like the Atlantic spadefish and tripletail. Currently, they are featuring an exhibit called Monsters: From Micro to Mega, which features everything from the micro monsters found in your own backyard to the mega monsters of oceans, both past, and present. This nonprofit organization also offers free educational material for teachers and students, including an entire K-12 STEM-based learning curriculum (shout out to everyone whose kids have been learning from home/homeschooling, this could be a great resource for you!). You can tune in Wednesdays and Fridays on its Facebook page for turtle talks and live virtual visits. And if you’re looking for a good date night, South Carolina Aquarium After Hours offers 21+ experiences with small plates, beer, wine, and entertainment, surrounded by water and wildlife. 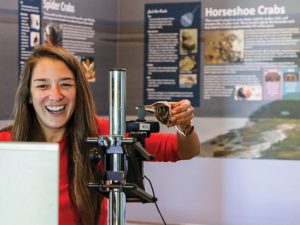 Located in Savannah on Skidaway Island, the Marine Education Center and Aquarium hosts around 25,000 visitors annually and is home to Georgia’s first saltwater aquarium. The center features 16 exhibit tanks that showcase a variety of Georgia’s marine life, and a touch tank allows visitors to get up close and personal with some of Georgia’s marine invertebrates such as snails and crabs. Most of the species are caught by aquarium staff right off the coast, so it’s an excellent way to really get a hands-on understanding of our ocean-dwelling next door neighbors. Visit bottom dwelling horseshoe crabs and stingrays, schooling fish like striped mullet and pompano, and fun additions like the longnose gar, seahorses, and invasive species like the red lionfish. Its freshwater tank houses two American alligators, and the display cases on the aquarium’s upper level house fossils of sharks, giant armadillos, whales, mastodons and wooly mammoths dredged from the Skidaway River. Reserve a one-hour slot for your visit, and be sure to arrive early or stay awhile after your appointment to enjoy the Jay Wolf Nature Trail and Boardwalk, which is wheelchair accessible. Picnic tables line the bluff outside the back door along the Skidaway River and provide a perfect spot to take a break and eat lunch. 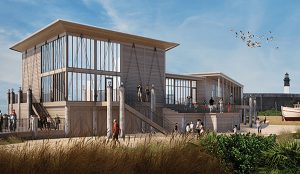 This facility on Tybee Island is brand spanking new. Opened in March, this $7.5 million upgrade is finally serving the community that made it happen. Overlooking the northside beach on Tybee, the center is 5,000 square feet with an amphitheater, an underground level with classrooms, an open-air classroom, turtle workshop, gift shop, several galleries, and a sky loft with views of Calibogue Sound and the shipping channel. One notable resident of the center is Addy, the 2-year-old loggerhead turtle. Addy drew national attention when a watchful housekeeper noticed the federally protected turtle hatchlings in the garbage outside of the Admiral Inn (which Addy is named for). Addy’s siblings were quickly released, and Addy stayed at the center to help educate the public about loggerheads. Just a few months ago she packed her bags and moved into the new center, upgrading her 800-gallon tank to a 5,000-gallon tank. When Addy is released next summer, hopefully she will come back to lay her eggs on the same beach where she was born. 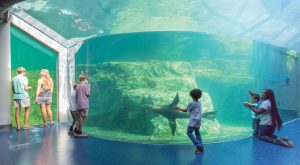 The Riverbanks Zoo and Gardens has a lot to offer, including an award-winning, 20,000-square-foot Aquarium Reptile Complex. The ARC has four galleries: the Desert, the Tropics, South Carolina, and the Ocean, featuring a 55,000-gallon Pacific coral reef tank with sharks, moray eels and more. The South Carolina Gallery has 24 individual exhibits displaying local amphibians, reptiles, fish, and invertebrates. Visitors can view native fish such as bream, crappie, bass, and even the rare Atlantic shortnose sturgeon. 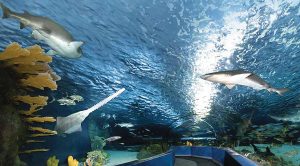 At the Ripley’s Aquarium of Myrtle Beach, you can touch the stingrays in the Ray Bay exhibit, explore the interactive multimedia playground of the discovery center, or pop over to the new penguin playhouse and watch them get their waddle on. Ripley’s also offers a variety of experiences, like diving with the sharks, swimming with the stingrays, a glass-bottom boat ride, and penguin encounters. Filled with thousands of fish of every shape and size, Dangerous Reef is its largest and most popular exhibit. Feel like you are swimming with the sharks as you move through the tunnel, surrounded on every side by green sea turtles, stingrays and more. Be sure to keep an eye out for the sandbar shark, which is commonly found in the coastal waters of the Atlantic and Indo-Pacific oceans, and the Atlantic tarpon, which can exceed 100 pounds.The current record in South Carolina is a 154-pound tarpon that was caught off the coast of Hilton Head Island in 1987. LL