The Magic City transitions from hot night spots to cool culture but remains as appealing as ever.

It’s hard to forget my first visit to Nikki Beach about six months after 9/11 in the spring of 2002. It was late on a Sunday night and I was in Miami on a combo business and pleasure trip. Some of the guys I was doing business with said it was the coolest new place in Miami Beach and I needed to experience it first hand before I left town. 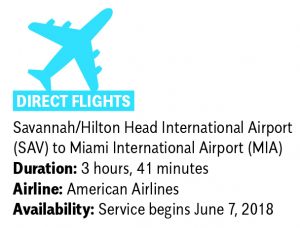 Oh my gosh! That first impression was simply – wow! I had already traveled to five continents in my life by that time, but had never seen anything like Nikki Beach. And, as I later learned, that’s because until Jack Penrod introduced the first of its kind “luxury beach club” at the southernmost tip of this coastal island, there had been nothing quite like it anywhere.

Now Penrod has taken the concept and expanded it into a luxury lifestyle brand across the world with locations including Marrakech, Morocco, Bali, Ibiza, St. Barts, French West Indies, Monte Carlo and Dubai, to name a few.

On that first visit we walked into the beachfront complex and all just stared, mouths agape.  The sound system reverberated. The stylish decor of white lounge chairs, private beds and even teepees spread across white sand were shimmering with soft lights from the swimming pools highlighting the figures of hundreds of gorgeous women, mostly in thongs and flimsy wraps swaying to and fro. As one can imagine, it wasn’t the decor that had each of us gawking.

But that was 16 years ago, and while Nikki Beach still remains a major attraction — a symbol of the beach party lifestyle that continues to draw countless thousands to Miami — the overall beach scene today appears to be somewhat tamed and more upscale. For example, the bikini crowd can still be found at Nikki Beach, but now it is mostly a day place (except on Sunday nights) where beauties soak up the sun on the luxurious day beds while enjoying brunch, innovative sushi snacks and creative cocktails. The extensive menu is quite international and there is even another new restaurant on site, “Key West by Nikki Beach,” that opened this past Christmas.

Such changes along the shoreline in Miami Beach reflect in part numerous other transitions across the Miami area that visitors from 10 years ago might find quite surprising. The single dimension image of sun worship and all-night partying has broadened to include a more stylish vibe with a buoyant cultural scene that has been prodded by an influx of musicians, art galleries, sleek luxury hotels and impressive architecture.

For example, the shining star of the beachfront today seems to be The WALLCAST® Experience Concerts and other special events at Soundscape Park and the New World Symphony Center between Lincoln and 17th Street – less than two miles north of Nikki Beach but three blocks off the ocean.

This dramatic facility allows you to experience simulcasts of live symphonic concerts plus cinematic events on a soaring 7,000 square foot projection wall of the New World Center. Here on a concert night as the sun sets, crowds gather on blankets and lawn chairs across the 2.5 acre green space to sip wine and revel in a wonderful experience. These concerts are free to the public. An events calendar on the website NWS.edu provides a schedule of the next six months of activities at the Center. 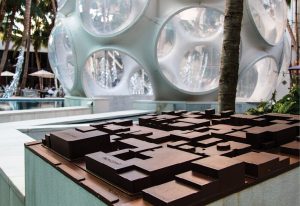 Illustrative of the greater emphasis of arts, music and culture is the Miami Design District, an 18-square block area which has blossomed on the mainland over the past 10 years along the west side of Biscayne Boulevard with North 36th Street on the south and North 43rd Street on the north. This creative neighborhood and shopping oasis is focused on celebrating innovative and high-class art, design and fashion. It is home to more than 70 art galleries and more than 100 luxury boutiques plus an assortment of antique dealers, collecting museums, restaurants, watering holes and the Institute of Contemporary Art Miami (ICA). Shaded pedestrian pathways, outdoor seating and community spaces such as paradise plaza have made the Design District family friendly. Iconic flagship buildings for luxury retail brands like Hermes and Christian Louboutin are located here.

ICA is fascinating in itself. Privately operated, it is nonetheless open six days a week to all comers free of charge. Visitors must call ahead to reserve entry tickets in advance 305-901-5272. Museum director Ellen Salpeter told the Miami New Times at the grand opening of the three-story, 20,000-square-foot gallery 14 months ago: ”We believe everyone should have access to the arts, and all of our programs are free as well.” 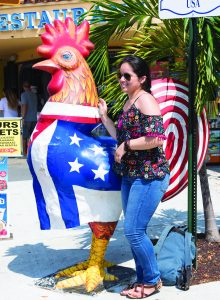 Looking for the best Cuban food in Miami and the ambiance of the Cuban culture? There is only one place to go and that is Little Havana in the historic district just west of downtown. The stretch of Calle Ocho from SW 12th Street to 16th Avenue is especially vibrant with the air of rich tobacco and Cuban music streaming from the open doors of Latin record stores and lively bars. Popular among locals is Ball & Chain, featuring jazz vocalists, salsa bands and local Cuban music groups. The place also is noted for its guayaba daiquiris made with guava nectar.

Originally founded as the Miami Art Museum, the Pérez Art Museum Miami was revamped, when it relocated to a new site overlooking Biscayne Bay. The museum’s collection is well worth seeing. It is displayed on three levels and focuses on international art from the past two centuries with special attention paid to Caribbean, Latin American, and Florida artists. In an effort to engage new audiences with art, the museum hosts classes for all ages and a variety of special events. Check out their calendar at PAMM.org

Back on Miami Beach, where most first-time visitors want to say they have experienced, there are still lots of hot spots that have taken the reins from Nikki Beach and have action to the early dawn hours.

Mango’s Tropical Cafe, LIV and Story Night Club generally get top billing as today’s best action spots, although admittedly every local night owl has his or her favorite haunts. Mangos is all about ambiance and epitomizes the South Beach scene experience. Live Latin bands nightly plus multiple rooms that play everything from hip hop to reggaeton. It’s best to make a reservation on weekends, but midweek it is generally easy to walk in. Open to 5 a.m. LIV at the Fontainbleu at 4441 Collins Ave. also is open to 5 a.m. and is said to be one of the top five grossing night clubs in America.

Cover charges start at $40 and can run to $100, but this is where you will often see celebrities like JayZ or Sean “PDiddy” Combs, Eva Longoria or Kate Hudson. It’s a place for Gucci and Prada, not jeans and a T-shirt. It is run by David Grutman, whom Forbes magazine calls “the king of Miami nightlife.” He also runs Story, a huge club that also caters to celebs and has terrific DJs and sound system. New clubs in South Beach that are making their mark are Ora (OraNightClub.com) and RecRoom (recroomies.com). Check them out.

If you are bleary-eyed and have closed the clubs down at 5 a.m., find your way to David’s Cafe Cafecito at 919 Alton Road. It opens at 6 a.m. and is legendary for its Cuban Coffee and cortadito (Cuban expresso). The guava pastries and empanadas are also terrific.

January through April is Miami’s high season. But budget-friendly (and crowd-wary) travelers have discovered that the summer weather here is not much different than South Carolina – in fact a bit less humid. So, June through September can be a good time to visit. This is when all the hotels offer their very best bargains and it is must easier to get a good table at the nightspots and restaurants. 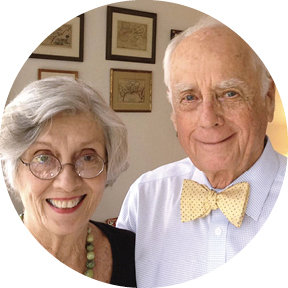 Public relations executive and author David Pearson was among the first individuals to take up residence in Charles Fraser’s brand new Sea Pines Plantation. The year was 1959, Pearson was a young correspondent with United Press International. He viewed the remote coastal island just north of Savannah as a possible adventure. And, it turned out to be exactly that.

Fraser recruited the youthful Pearson to be his start-up PR and advertising coordinator, and with a flair for creativity and an eye for a good story angle, Pearson was the first to achieve national media attention for Hilton Head by setting up the island’s most iconic photo ever – Charles Fraser walking alongside a giant alligator with a hat, a cane and a three-piece suit. The eye-catching photo wound up on the cover of one of America’s most read magazines of that era — The Saturday Evening Post. It was just the first of many major publicity hits for the island orchestrated by Pearson before he left in early 1963 with his wife Anne to work with the Peace Corps’ new Director Sargent Shriver.

Following that stint, the Pearsons moved to Miami where David discovered lots of warm weather and founded a highly successful public relations firm. Now in their 80s, the Pearsons enjoy many of the finer activities that this internationally cosmopolitan city offers. The following are some of their recommendations:

South Beach Boardwalk
The area has become the world’s most colorful Art Deco district and a haven for models and photographers from across the globe, from South America to Europe.  If you are hoping to see a celebrity, drop into the Delano or the Raleigh hotels.

New World Symphony
The home of the world’s finest training orchestra is located just west of the Ocean in South Beach (500 17th St. to be exact). A broad range of concerts feature the orchestra’s young talent and, frequently, world-class conductors stand in for permanent conductor Michael Tilson Thomas.

Perez Art Museum Miami
Located on the edge of Biscayne Bay just off the MacArthur Causeway, this new museum is dedicated to contemporary art from the 20th and 21st centuries. Heavily influenced by its Cuban roots.

Joe’s Stone Crab
A favorite for decades and located at the south end of South Beach, Joe’s is an absolute “must” for visitors to Miami. Stone crabs arrive fresh daily from the nearby Florida Keys, and boy, do they know how to crack ‘em.

Café Abbracci
In Coral Gables, a Spanish-themed little city to the west of Miami, you’ll delight in lunch or dinner at this small, sophisticated spot. It’s a neighborhood favorite with a Manhattan vibe, but with Colombian and Argentine waiters.

Snapper’s
Your choice, no matter whether the succulent yellowtail or the tender Florida lobster tail, will be fresh from the turquoise waters offshore. If you ask for an outdoor table, you may see tarpon and snook nosing around under the deck, hoping to score a small bite of your roll.

Faena Miami Beach
This is a spectacular new property that is part of the official Faena Arts and Entertainment District which is still evolving. The hotel was designed by Hollywood director Baz Luhrmann (“The Great Gatsby”) and his costume designer wife.

The 1 Hotel South Beach
This is the flagship of the world’s top “green hotel” group. Entry level rooms start at 650-square feet which is huge for South Beach.  Everything is very sophisticated. Farm to table dining in a wonderful setting.

Kimpton Epic Miami
Located downtown, this is considered the coolest hotel in Miami (as opposed to Miami Beach). It is a boutique hotel concept on a large scale and is ideally located amid the new attractions like the Performing Arts Center and Perez Art Museum.