HOTTEST PLACE FOR THE HOLIDAYS? THE BIG APPLE.

The average temperature hovers around freezing in December, but there is no hotter place to spend the holidays than in New York City. From snuggling to keep warm during romantic horse-drawn carriage rides through Central Park, to sipping on Frrrozen Hot Chocolates among the local glitterati at Serendipity 3, to viewing the electrifying winter-themed window displays along the famed Fifth Avenue couture corridor, you’ll build up a sweat keeping up with the seasonal splendor in the city that never sleeps.

When Central Park’s 843 acres are covered in twinkly white snow, its radiance outshines the top of the Chrysler Building. Located in the middle of New York City, this bucolic beacon invites locals and tourists alike to hop aboard a cozy carriage for a horse-and-buggy ride to tour Belvedere Castle, Bethesda Fountain and Strawberry Fields. Operations cease when it gets below 19 degrees, but the carriages’ heated seats help take the sting out of the frosty air and the steep prices, close to $60 for the first 20 minutes. 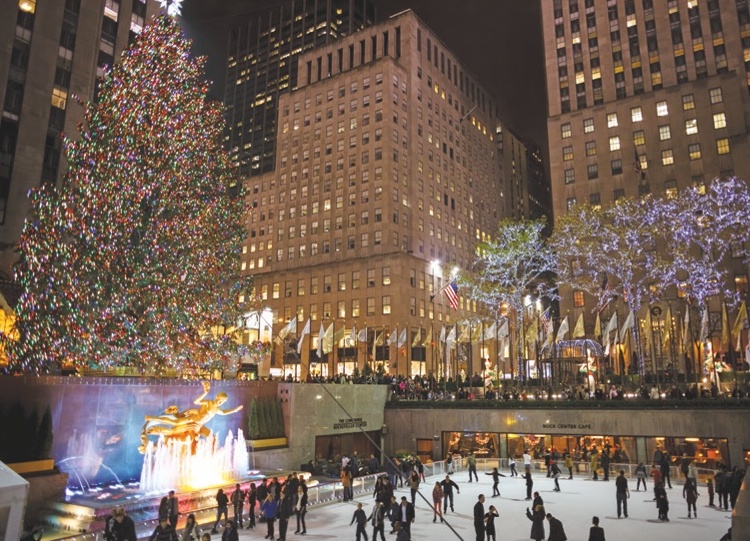 30 Rock
To feel merry in Manhattan, head to Rockefeller Center to bask in the glow of more than 50,000 multi-colored LED lights that adorn the huge Christmas tree installed at 30 Rockefeller Plaza. This year’s crowds will visit the 89th annual uber-shrub that usually weighs in at 10-11 tons. You can ice skate right under the sassy spruce at The Rink, a sunken plaza that features a skating pond that first opened on Christmas Day in 1936. Only 150 skaters at a time are allowed to glide across the glistening surface, so while you wait your turn, visit the more than 100 shops and eateries at the Center, stage a selfie with an iconic illuminated angel at the Channel Gardens and walk up the block to Radio City Music Hall, where you and your family can give the Radio City Rockettes a standing O at the Christmas Spectacular. 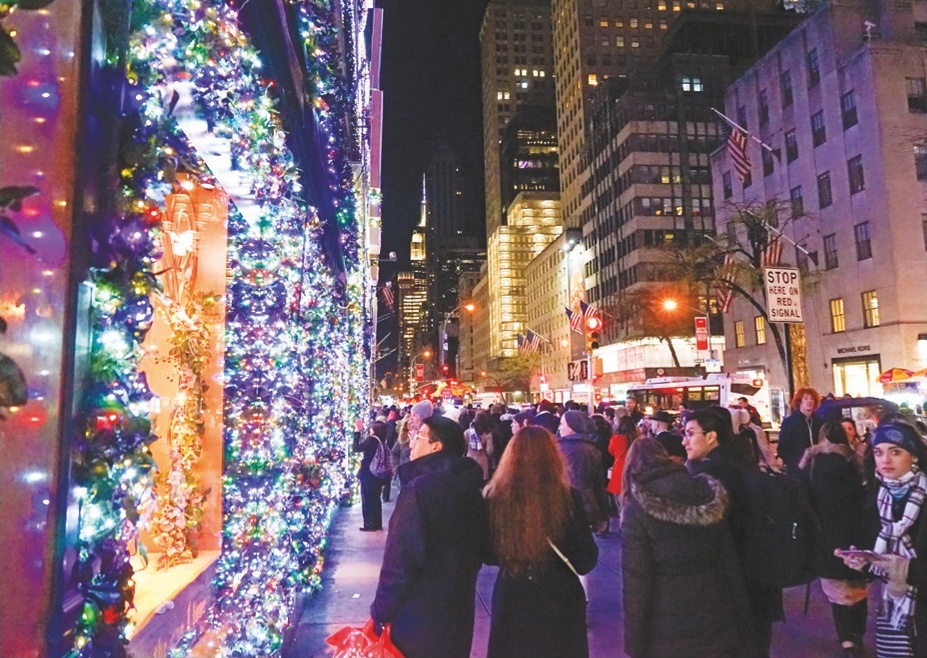 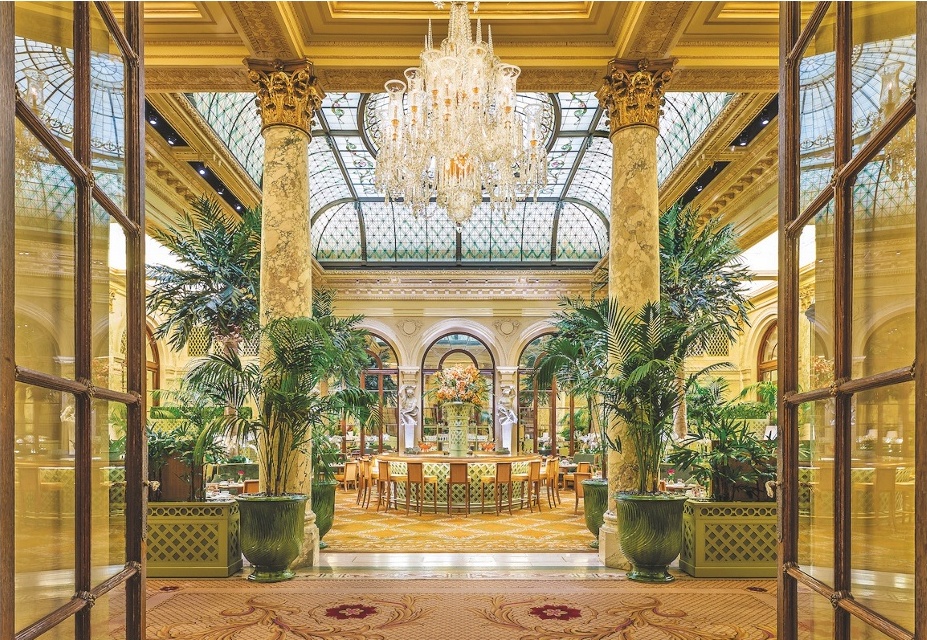 Where Fifth Avenue meets Central Park, you’ll find The Plaza Hotel. Once inside, warm up while enjoying high tea at The Palm Court and pay pilgrimage to the imposing portrait of Eloise, the fictional precocious six-year-old who ruled the roost at the hotel in the popular children’s book series. Book an overnight stay at one of The Plaza’s exquisite rooms, including the jazz-age Fitzgerald Suite designed by the Academy Award-winning production and costume designer for the 2013 movie version of The Great Gatsby. 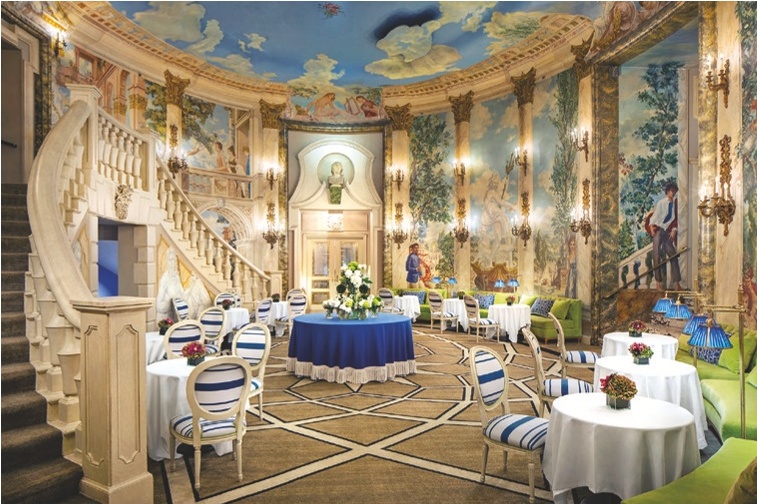 Room at the inn

Sumptuous hotel accommodations are sprinkled like snowflakes all over The Big Apple, but there’s something special about The Pierre’s French classical meets New York chic that makes its Versailles-inspired opulence particularly grand during the holidays. Its Les Clefs d’Or concierge service promises to “make the impossible possible, every day” and ensures theater tickets and dinner reservations, private appointments with gallery owners, jewelers and personal shoppers, and hair appointments at its exclusive in-house Suite Reyad Salon.

The Peninsula Hotel’s rooms and suites are also deluxe, and its spa, fitness center and indoor pool provide an urban oasis, but its Peninsula Academy’s bespoke programs are what keep this hotel on top of holiday wish lists. Choose from a private tour aboard the Intrepid Sea, Air & Space Museum, a Broadway experience with a post-show meet and greet with your favorite thespian, a VIP wedding dress excursion for brides-to-be, a Brooklyn Bridge walking tour and even culinary classes for your kids. The seasonal “Nights Before Christmas,” package provides children a gingerbread playhouse for their suites, a candy-cane scavenger hunt, a gingerbread cookie decorating kit, exclusive access to The Peninsula Sweet Shoppe and a Christmas movie library, complete with classic films. 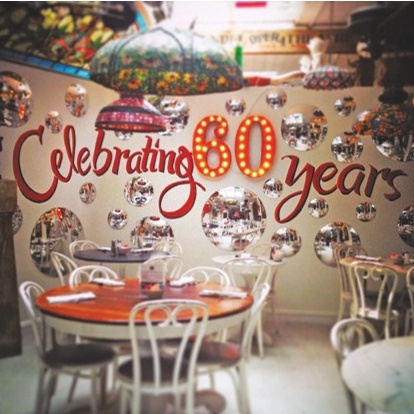 Eat, drink and be merry

New York’s coveted libation for chilly afternoons can be found at Serendipity 3. Its Frrrozen Hot Chocolate concoction is a custom blend of 14 gourmet cocoas mixed in a blender with milk and ice and, at around $15, it’s much more affordable than the dessert destination’s $1,000 Golden Opulence Sundae that’s dusted with edible 23-karat gold leaf.

You also can climb aboard one of two 1920s-styled yachts, the Manhattan or the Manhattan II, for a Cocoa and Carols Holiday Cruise. It’s a 90-minute heated tour along the island’s waterline that’s accompanied by live carolers who croon the classics. Inside the ship’s toasty solarium, enjoy a complimentary cup of hot cocoa while sailing by the Statue of Liberty and Ellis Island. General admission starts at $124, and groups of four or more cost $96 per person.

For an intimate dinner make your way to Raoul’s on Prince Street in Lower Manhattan. It’s a dimly lit French bistro that serves moules frites, seared fois gras and steak tartare on the tables and provocative artwork on the crowded walls.

And, for those who love to celebrate the holiday season but don’t actually celebrate the holidays, Wo-Hop in Chinatown is open 365 days a year. The long line to this basement destination is a social melting pot of patron cops, high-society debutantes, international tourists and foodie insiders know Wo-Hop’s menu, which includes crispy egg rolls, shrimp with garlic sauce and chicken kow with black bean sauce, is the great unifier.