This lovely Seaside Sparrow home was reimagined as a majestic seaside retreat.

There’s nothing like a renovation to get the creative juices flowing. When Susan and Rodney Barstein set their eyes on what would eventually become their Seaside Sparrow home, there were plenty of opportunities to refresh and reinvigorate the space. There were, naturally, those changes that were purely aesthetic – the addition of a signature tabby accent wall in the main living space, not to mention beautiful stone in the kitchen and the bathrooms. But there were also the additions, including the master bedroom and the second master upstairs.

“We gutted the kitchen,” said Susan Barstein, “There was an upstairs area that was almost a loft, and it had a bathroom like you might find on a boat.”

Clearly the couple had their work cut out for them. But they were ready for it, long dreaming for a retreat closer to the beach than their previous Planters Row home. And what’s more – they had a team. 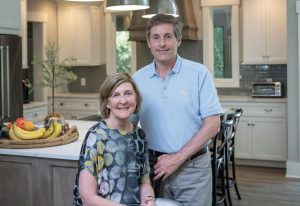 Aiding them in creating this new space were Susan Barstein’s sister Amy Beiser, who provided interior design services for the furniture and accessories featured in the home, and installed at the end of the project. Other key players general contractor Charlie Weaver of Clear Cut Construction and Susan Miller, a sought-after designer with Markraft Cabinets.

“I had three of the best people on my side,” said Barstein.

Miller worked hand-in-hand with the Barsteins on the creation of their Seaside Sparrow home. “It was definitely a labor of love on their part… we were really in sync with our vision of that house,” she said. And given the work it entailed, that harmony was crucial. “It’s unrecognizable to what it was. We converted it from an outdated, poorly maintained rental house into a premium Sea Pines property with every appointment and convenience.”

With the Barsteins purchasing the house for the rental market, every decision had to be made with an eye on easy maintenance and longevity amid the wear and tear of vacation guests. One of those decisions resulted in a majestic centerpiece of the home’s living space – a vast quartz kitchen island made from LG Hausys Viatera.

Set in a pattern of calacatta alpha, its streaks of grey run through white stone casting brilliance and beauty to a counter built to withstand anything. “It really has the look of natural stone without the upkeep and with added durability,” said Miller.

The counter came from Stoneworks, just a part of the beautiful stone that runs throughout the home. “We really tried to gear it toward a coastal look that would be timeless,” said Miller. “So in five years you can repaint with new colors and everything will blend beautifully.”

That coastal look reaches its apex in the great room, where a tabby wall serves as a beautiful signature of the home. “It really made a statement,” said Barstein. “That tabby wall, when people walk in they just say, ‘wow.’”

This home began as a blank slate. From extensions that added living space to materials, textures and accents that evoke a timeless coastal sophistication, it became a masterpiece.