Lowcountry waters are swimming with delicious shrimp, so why not try your luck at netting a few? Grant Kaple, general manager of The Boathouse, recommends trying the two most preferred recreational methods: deep-hole shrimping and shrimp baiting. Each technique’s limit is regulated to 48 quarts with the heads on.

“Deep-hole shrimping requires a 10- to 14-foot cast net wrapped at the lead line with tape,” said Kaple. “The tape prevents the cast net from collapsing and allows the net to stay completely open as it falls to the depths.”

Once you locate the shrimp pod, ball or mass with your sonar, throw the net. “Be sure to have additional rope to allow the net to sink as much as 40 feet,” he said. “Upon reaching the bottom, you pull the net up, release the shrimp into your cooler and repeat.”

Another method to consider this time of year is shrimp baiting. “Each year starting in September, there is a 60-day shrimp baiting season in South Carolina,” Kaple explained. “The usual bait is dried menhaden mixed with clay.”

Clay allows the menhaden (also known as bunker fish) to reach the bottom, where the shrimp eat it slowly. “You are allowed ten poles to mark where you dropped your bait,” Kaple explained. “At low tide you place your poles next to your favorite marsh spot, drop your bait and wait for the tide to rise. You throw your cast net next to the pole as it rises, pull it in and release the shrimp into your cooler.” 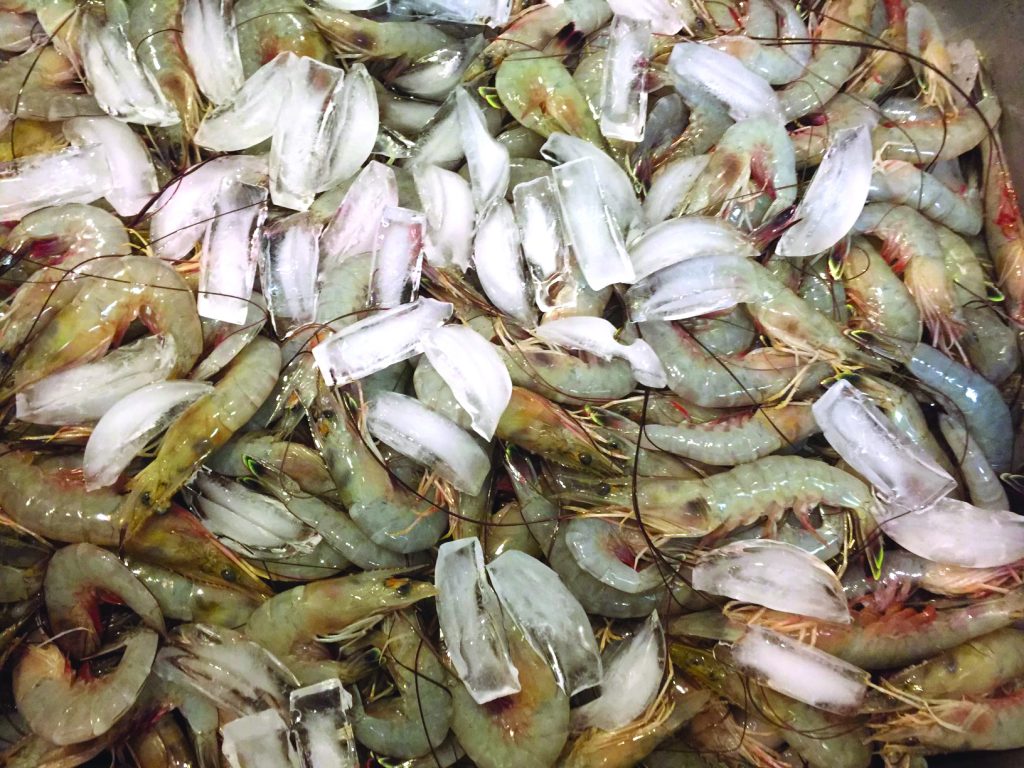 For local fisherman Collins Doughtie, using a cast net is the only way to go.

“Only two things might stop you from catching shrimp — a bad back or false teeth. Using a cast net is the only way, and they can be difficult to master. They are heavy, and because you have to hold a small section of the net in your teeth, denture wearers, beware. Twice while I taught how to throw a cast net, my pupils neglected to tell me they had dentures and upon throwing the net, their teeth went with it to the briny depths, which I assume is quite costly. If you are a beginner, I suggest a 5- or 6-foot net. Go at dead low tide, and throw along the shoreline. Because of limited space to write, I won’t go into deep-dropping cast nets, which is a whole different animal and way more strenuous.”

A commercial shrimper caught the record white shrimp off Seabrook Island in July 1979. That shrimp was estimated to be 14 months old. It measured to be just over 10 inches long.

Every year Americans consume over one billion pounds of shrimp. In fact the average American eats about 15 pounds of seafood each year, and four of those pounds are shrimp alone. You can help boost these numbers without even having to catch them. Nearly every restaurant here prepares shrimp, so we won’t bother listing them out. But if you enjoy cooking fresh seafood, here are a few tips.

Never defrost shrimp in the microwave: While microwaving frozen shrimp might seem like a good shortcut when you need dinner in a hurry, it’s not a good idea. Shrimp cooks quickly, so it can go from frozen to overcooked before you know it. Try sticking frozen shrimp in your refrigerator 24 hours before you need it, or let the frozen bag sit under a stream of cold water for about 15 minutes if you don’t have that much time.

Don’t be so quick to ditch the heads: In many parts of the world, shrimp are eaten with the heads on. The alien-like appearance may deter many Americans from cooking and eating this critter whole, but in many regions of the world, the shrimp head is left on. When it’s cooked, the head has a rich flavor and a crunchy texture that some people love.

Please clean your shrimp: When recipes call for deveining shrimp, it’s telling you to remove the digestive tract. The easiest way to devein shrimp is with a pair of kitchen shears or a sharp paring knife. Simply snip or cut a shallow ridge along the top of the shrimp from the wide end toward the tail and scrape out the little black strip. The beauty of this method is that you can also peel the shells off if necessary.

Don’t toss the shells: If you peeled your shrimp before cooking or serving, don’t just throw the shells in the trash. The shells of crustaceans (shrimp, lobster, crayfish, and crab) are loaded with flavor. They’re the key to making a flavorful bisque or seafood stock. Store the shrimp shells in a zip-lock bag in the freezer until you’re ready to use them.

Be careful not to overcook: Shrimp are fully cooked when their little interiors reach 120 degrees Fahrenheit. They’ll go from a translucent bluish-green (depending on what type of shrimp you’re cooking) to opaque pink. If they curl up into tight little Os, they’re overcooked.

Any way you slice it

Cooking shrimp can be tricky due to their size and texture. Here are some standards for cooking shrimp, whichever way you prepare them.

[1] Arrange your shrimp in a single layer on a rimmed pan. [2] Coat them with butter or olive oil and sprinkle them with salt, pepper and other desired seasoning. [3] Bake in a 400-degree oven until cooked through, about 8 minutes.

[1] Preheat a grill to medium-high heat and thaw the shrimp if frozen. [2] Place the shrimp (shell on) in a bowl, drizzle with olive oil and sprinkle with kosher salt and pepper. [3] Grill for 1 to 2 minutes per side until bright pink and cooked. [4] Remove from the grill and finish with fresh lemon juice.

[1] To help with the sear, pat your shrimp (shells off) dry and lightly salt and pepper. [2] Bring a medium-sized pan to medium-high heat. Add butter and melt, then add olive oil. [3] Place shrimp in a single layer into the pan and cook for 1 1/2 to 2 minutes, or until one side is seared. Don’t disturb the shrimp before seeing a sear on the bottom side. [4] Flip the shrimp and cook for 30 seconds to 1 minute, or until the shrimp is cooked through. The second side will sear faster than the first and doesn’t need as much time unless the shrimp are bigger.

[1] Heat oil in a deep fryer to 350  degrees. [2] Dredge your peeled shrimp. We recommend dipping shrimp in buttermilk, placing 4 or 5 shrimp into seasoned flour in a baggie and shaking to coat shrimp on all sides. [3] Cook shrimp a few at a time for 1-2 minutes or until golden brown and 145 degrees inside. [4] Remove with a slotted spoon and drain on paper towels.