Justin Johnston has spent a lot of years tinkering with tomato juice. And now countless brunch-goers, bar hoppers and amateur chefs are reaping the benefits of all that tweaking and tasting.

The former bartender-turned-businessman is the creative mastermind behind Bloody Point Mixing Co., a line of high-end Bloody Mary mixes that have gotten a big boost in the last year, thanks to an investor in his company, local entrepreneur Tim Tysinger, and a small team of pros working to market and distribute the varied and tasty concoctions.

Formerly called Your Mom’s Bloody Mary, the revamped Bloody Point Mixing Co. was named after the Daufuskie Island battle site from the Yemassee War in the early 1700s.

“I always wanted to keep something Lowcountry in the name because I love the Lowcountry,” says Johnston, who grew up in Indiana and settled on Hilton Head in 1999. “And I’ve always been a small guy going up against the big guys. Our tagline is ‘Better is always worth fighting for.’”

His line of three different Bloody Mary mixes are distributed in five states currently, with one major grocery chain and others coming on board soon, he says. But there’s a lot more in store, Johnston says. That includes a cookbook of mostly food recipes using his mixes, called The Bloody Mary Cookbook presented by Bloody Point Mixing Company, due out later this year. He also now has a Bloody Mary mix powder for sale called Bloody Point Evolution.

So why focus on the Bloody Mary?

“There’s a million different combinations to it,” he says. Plus, the experienced bartender saw a need. “There weren’t too many mixes on the market that were high end. They all were mostly fairly bland, loaded with MSG and preservatives. The bars would order a Bloody Mary mix from a distributor or a store and then they’d doctor it up. That didn’t make sense to me. Why do things twice? Why not make something that comes out of the bottle ready to go?”

Johnston has plenty of tips for Bloody lovers — and haters — alike.

Save the hot sauce for your eggs.

Don’t get stuck in a vodka rut.

“Over the years, vodka took over a lot because vodka’s a very neutral spirit. But I’ll tell you what, you get the right type of gin in something, it’s crazy. I just drink gin Bloody Marys,” he says. “But not all gins work; gins with less juniper typically are wonderful.” Johnston says local-inspired Bulrush Gin is the perfect fit for his Coastal Mary mix. “It’s a handcrafted, small batch gin and I do a lot of stuff with them because it’s just a great match with what I do.”

“My favorite customers are people who hate Bloody Marys, because there’s this misconception about how they taste like tomato juice. Well, there’s a lot more than that. You can taste tomato juice, and you can taste our Bloody Marys, and it’s night and day,” he says. “I used to be the same way. Tomato juice? Gross. … A lot of this stuff is in people’s heads. It was in mine.”

“To me, the more garnishes you see, they’re kind of hiding the flavor of the Bloody Mary,” he says. Celery is used to neutralize the palate because some Bloody Marys are so robust, but Johnston doesn’t go for much beyond the solitary stalk. “I prefer to keep it as simple as possible.” 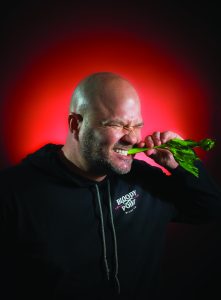 When making the aforementioned Coastal Mary using Bulrush gin, Johnston likes to add a garnish of tuna sashimi with a wasabi blue-cheese-stuffed olive and a crisp cucumber slice. “The Coastal Mary is probably my favorite right now. It has a clam juice base with some Japanese seasonings in it.”

Don’t get hung up by a hangover.

“My Bloody Point Remedy Mary is the lightest of all three, with more hints of horseradish. If you are hung over, you don’t want something that’s quite so robust, so this has a lighter feel to it. It’s still full of flavor, but it’s not in your face,” he says. “Plus it has Vitamin B12 in it, and about half a cup of coffee’s worth of caffeine per serving.”

Salt and pepper to taste

Directions [1] Cut 1 lime in half and squeeze the juice into a medium sized pot half filled with water. Add the two halves of the lime, kosher salt and cumin; bring to a boil. Add the shrimp and cook until it becomes lightly pink, approximately 3 minutes. Remove from heat, drain and place in a bowl. Squeeze the lime juice from the remaining two limes over the shrimp, cover and place in the refrigerator for 20 minutes. [2] In a medium mixing bowl, add the Bloody Mary, ketchup, sriracha and minced garlic. Slowly whisk in the olive oil until evenly mixed. Add the shrimp, drained onions and the remaining ingredients except for the avocado. Place in the refrigerator for an additional 20 minutes.

Directions In a 14-ounce glass, add in the following order: ice, ginger beer, vodka and Bloody Mary. With a long spoon, gently stir four times. Garnish with a wedge of lime and a thin strip of pickled ginger.

1 1/2 ounces of a sweet and smooth bourbon

Directions [1] With a handheld blowtorch over a non-flammable surface, heat the hickory and rosemary until it begins to smoke. Take a 12-ounce mason jar and cup it over the smoke. Let it sit for approximately 45 seconds. Smoke will begin to accumulate in the glass.
[2] While the glass is smoking, in a separate glass, combine ice, Bloody Mary and the bourbon. [3] After 45 seconds turn the smoked glass over, add the Bloody Mary from the other glass. Swirl around. Garnish with a garlic stuffed olive, cheddar cheese cube and Bloody Mary candied bacon.