Around a curve of beach along Port Royal Sound, you catch your first glimpse of a lone, tall figure standing beneath a windblown pine. Draw closer, and Holly the Wishing Tree comes into focus, beckoning with armfuls of oyster shells dangling from her stick limbs, her handsome carved face gazing out to the sea. On the day I encounter her, she’s sporting two pairs of glasses, a shell necklace with a yin-yang symbol, a feather in her ear, and ruby red lips. Making a wish, I bend down, pick up a shell and hook it on her shoulder.

A short stroll up the sand, beneath a stand of trees, sits the driftwood desk crafted by Holly’s creator, Hank Bellamy. If you get here at the crack of dawn, you just might catch a glimpse of the artist perched on its rough-hewn bench, pen in hand, his journal open on the desk’s weathered surface. There amid the collection of shells and other beach-combing finds left by passersby, he pens the next scene in his Harry Potter-type adventure novel.

Later kids and adults alike open the adjacent mailbox (address: #Beachmail), decorated with stickers (Ron Jon Surf Shop, Save Our Oceans) and pull out the notebooks he’s tucked inside. Here they’ll share drawings and doodles, poems, stories, prayers and professions of love, and other random thoughts with anyone who leafs through their pages.

So who is the artist behind these serendipitous beach finds?

I discover he’s a man who packs a lot into life. Along with a career as a Beaufort County builder dating from the Charles Fraser era to the modern day, Bellamy has overseen major building and infrastructure projects like power plants, race tracks, and resorts in several states, as well as in Italy.

What’s more, he’s a man who reaches out to embrace new ways of looking at the world and, in doing so, has explored a variety of art media like drawing, painting, music, video, and sculpture. As a result, talking to Bellamy is a wild ride, roller-coasting through rapid-fire observations, veering off on intriguing side trips –– all reflected in his newest works.

[Q] Did your beach art begin as a kind of David Sedaris thing? You know, picking up trash as a public service?

[HB] Back in the 1980s, we started the “Adopt-a-Highway Program” here. I became grand marshal, and we gave prizes for the most valuable picker, the most unusual object. So, I was already in the mode of “I don’t like littering.” Meanwhile, as my wife and I walked the beaches, she would collect trash. I began emulating her but kept finding interesting things –– fossils, bones, sea glass, artifacts and anthracite coal left from the Civil War.

So I decided to formulate something with this trash, something anthropomorphic. A while back I met naturalist Holly Feltner and was inspired to make this allegorical portrait out of driftwood. I named it Holly the Wishing Tree. The eyes represent her world view and empathy for the inhabitants of our marine environment. And the crystal embedded in her forehead represents her diamond-like clarity of vision and innate calm.

[Q] Holly the Wishing Tree has turned into quite the interactive installation.

[HB] It’s taken on a life of its own. People put clothes, hats, sunglasses on her. Someone painted her lips red and put rouge on her cheeks. I make necklaces out of sea glass and put them around her neck and welcome people to take them. 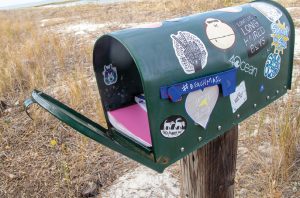 [Q] And the #beachmail box and desk?

[HB] The idea came from a book about Joshua Slocum, an old guy who was the first to sail solo around the world. When he comes up to Post Office Bay in the Galapagos, he discovers that in whaling times, sailors would write letters home and put them in a barrel there. If anyone who was sailing past found a letter that was being sent to where they were going, they would deliver it. And they didn’t need to put postage on it. I was fascinated by that. Then I happened to see a beach mailbox on Bird Island in North Carolina, so I put this one up on the beach here and people started finding it and writing in the notebooks.

I made the desk and a bench because I wanted to go down every morning and work on my book. (I carved the latitude and longitude on the desktop.) It’s been quite a crowd pleaser. So many people have thanked me. They take out the notebooks and write poetry, and personal stuff like “this is our favorite beach” and “my daughter died and I miss her.”

[HB] I portrayed the sculpture as “Mother Ocean,” a sea creature collecting and cladding herself with debris for protection. The statue itself is made from anthracite coal gathered from the grounds where the Battle of the Port Royal Sound took place in 1861. The trash –– refuse, flotsam and jetsam picked up from the beaches there –– are examples of the fragmentation and deterioration that’s taking place all the time. It’s not all Bud Lite cans and single-use plastic water bottles polluting our waters. Those little broken-down pieces of debris are the most dangerous to marine life.

[HB] My watch word is to keep an open mind. Having a closed mind is anathema for producing creative work. Having an open mind is how you get there. LL