Executive chef Brian Coseo is creating healthy meals daily for a discerning crowd at Blue Heron Pub and Grille at Sea Pines Country Club — and he couldn’t be happier about that. 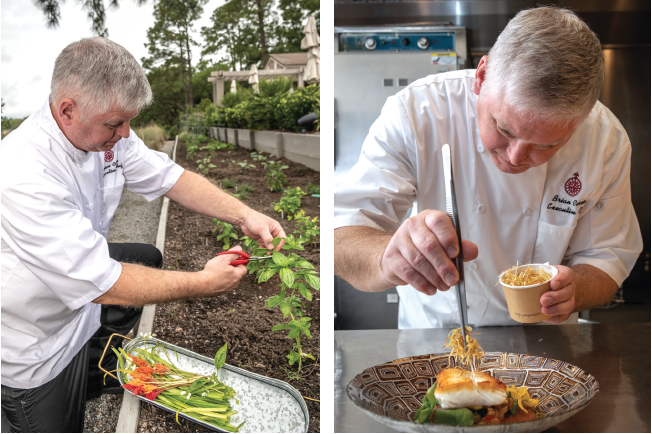 Many of the private club’s members are well-traveled and seeking food that feeds their active lifestyles, he says. “They’re a healthy membership. They’re multi-generational and out there swimming, playing golf, playing tennis every day, and eating healthy.”

Sea Pines Country Club is already a member of America’s Healthiest Clubs and scored an 88 percent on the organization’s 2017 Health Report. Its current wellness and fitness center’s renovation project includes a new café, which also falls under Coseo’s jurisdiction and will include freshly made juices, power bowls, healthy wraps and more.

“We’re trying to keep our members happy and healthy,” he says. “Consumers today are far more intelligent about what they’re putting in their bodies.”

Coseo serves up some advice on healthy cooking for those who aren’t lucky enough to dine on-the-regular at his Sea Pines eateries.

Healthy cooking starts with careful selection of the foods you’ll eat, he says, and that means doing some research on how the meat you buy is being raised, how the produce is being farmed, and what certain vegetables can do for your health.

Getting those answers can be difficult in a grocery store but easier at a farmers market, he says. “Whenever you can go to a really good farmers market, you have the ability to talk to the people who are growing their produce, bakers making the bread, beekeepers making the honey. You’re more apt to learn something and take it home and try it.”

When people think of “healthy food,” some envision things like dressing-free salads and other low-calorie sadness. “People have this perception of healthy food that it’s not going to taste good,” says Coseo, who argues that the opposite is true when fresh, nutrient-rich food is prepared simply, allowing the natural flavors to shine. “It goes back to my philosophy of taking quality products and putting that on the plate. Grass-fed beef, fresh fishes, we go to local farms for microgreens and lettuces — you put that on the plate, and the food and the flavors are awesome.”

Furthering that “fresh is best” philosophy, Coseo and his staff began an on-site garden last year. “We just replanted for the spring where we have tomatoes, pole beans, basil, thyme, parsley, jalapeño peppers, a variety of lettuces, and we use that in our dishes as well.” 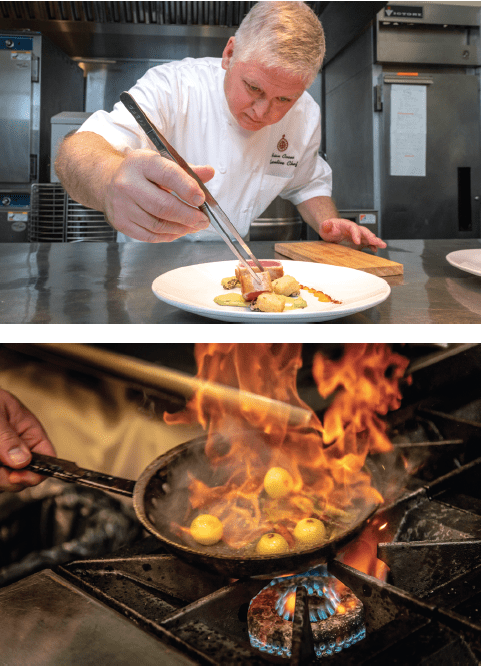 Have Fun With It

Those who are afraid to cook from scratch tend to rely on pre-packaged, processed food that isn’t nearly as good for you. Coseo suggests “playing around with food,” taking the seriousness and risk out of the equation and just trying new recipes and ingredients. “Don’t get intimidated by recipes. It’s not rocket science, it’s food. Food is very creative. You might not knock it out of the park every time, but that’s how you learn.”

He says he hasn’t tried meal kit services like Blue Apron but is in favor of them if it helps to spark a new attitude in the kitchen. “I think anything that helps people eat healthier, explore different ingredients is good.”

The chef believes indulging in our less-than-healthy favorite dishes is fine — in moderation. “I don’t think there’s anything wrong with eating a fried green tomato, as long as you’re not eating it every single day,” says Coseo, who admits he could never take the Par 3 — a grilled cheese, tomato and bacon sandwich on white bread — off his menu.

An important part of enjoying a less-than-good-for-you food is to watch the portion size, which for years was out of control at many restaurants and gave people a skewed perception of how much they should be eating. “I think the days of the ‘Super Size Me’ is, thank God, going away. We’re going back to more realistic portion control.”

A Bit of Background

Before coming to Sea Pines, Coseo was executive chef at The Racquet Club of Philadelphia, which dates back to 1889 and continues to be one of the most prestigious private city clubs in America. When both of his children opted to head to the University of South Carolina for college and then didn’t return to the Northeast after graduation, the chef and his wife decided to move closer to them.

For Coseo, the move to the Lowcountry was a return: After graduating from the Culinary Institute of America in New York, he started his career working for The Marriott in Shipyard Plantation back in the mid-’80s.

“It’s a beautiful island; we love it down here.”

Directions [1] Heat oven to 400 degrees. In a large nonstick baking dish, add halibut and drizzle with oil. [2] Top with garlic, parsley, lemon zest and juice and white wine, dividing evenly over fish. Season with salt and pepper. [3] Bake for 12 to 15 minutes, until halibut flakes easily when tested with a fork.

To Serve [1] Place fumet (recipe below) on bottom of plate. Top with halibut (recipe above) and hash (recipe below). [2] Garnish with fresh parsley or fried leeks.

Directions [1] Take your tomatoes, onions, and garlic and place in a sauce pan. Fill with water until tomatoes are covered. Bring to a boil, then reduce to a simmer on medium heat until tomatoes are soft. Strain off the liquid and put in blender run on high until smooth. [2] Once fully blended, place through a fine strainer into sauce pan. [3] Place on medium heat, add remaining ingredients and simmer until thickened. Season to taste with salt and pepper.

Directions [1] In a large sauce pot, fill with water and turn on high heat. Add potatoes and cook until tender, approximately 10-15 minutes. Strain and cool. [2] In a large sauté pan add olive oil and place on medium heat. Saute vegetables and cook until al dente. Season to taste with salt and pepper and paprika. Finish with fresh dill, butter and fresh lemon juice. [3] Heat oven to 425 degrees. Mix together blanched potatoes and vegetable, form into cake using a ring mold, place on nonstick baking sheet drizzle with olive oil and sea salt bake and bake 15 minutes until top is brown.