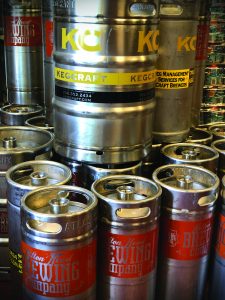 I have to confess: I am not a beer drinker. I don’t like the smell or the taste. So, when I was assigned a story on a brewery, walking in the door I felt like I was at a distinct disadvantage. I didn’t want to sample something that I knew beforehand that I wasn’t going to enjoy. So, when I met Juan Brantley, owner of Hilton Head Brewery, I didn’t want to insult him by refusing to taste his craft beer. To his credit, when I told him that I didn’t drink, he knew that he wasn’t going to waste a beer on me and graciously said, “OK, then you can smell the samples and I’ll drink them.” And there began my education into brewing a craft beer.

A lesson in lagers

Before this interview, in my ignorance, I thought all beer was about the same; sure, I knew that there are several different brands of beer, but to me, they all looked similar and smelled relatively the same way. What I didn’t know was that even though the origin and production for beer is the same, the flavor of a craft beer is really a serious exploration for your senses; not only in taste, but also in aroma. Comparing a beer, in terms of its texture, taste, color and variety, similar to the way wines are evaluated, was something that I would have never considered. What I learned from Brantley is that beer is not just a beverage; it can be much more than the casual drink that I had always thought it to be.

“A lot of love, time and caring goes into making craft beer. Crafting and weaving the beer by hand is the difference between our beer and mass-produced beers,” he said.

Not that I tasted the beer, but when I smelled the Hilton Head Tropical Lager, I was struck by the refreshing citrusy scent that made me realize for the first time, that all beers are not the same.

The process of brewing beer is finding the correct combination of chemistry, cooling, and patience. A blend of water, grain, yeast, and hops is the basic foundation of all beers. However, when it comes to brewing the perfect craft beer, the color depends on the type of grain that’s used, and the flavor is all in the hops. Hops are what give the Hilton Head Tropical Lager that fresh, crisp citrus flavor that’s reminiscent of the perfect vacation in a bottle. Once cooked then cooled, the beer needs 28 days to marinate into its desired flavor.

The beer industry is a business that is constantly moving and evolving with increasingly sophisticated consumer tastes and the expectation of variety. The fruity flavored beer is a growing trend in craft brewing and it takes a special blending ability to get the flavor just right.

Considered to be the true definition of an entrepreneur, he owns the Hilton Head Brewery and once owned the Brew Pub. In addition, he has a construction company that builds houses, a commercial paint company, and he’s a real estate investor. Brewing beer wasn’t something that he ever expected to be doing, but once he started, he found that it’s where his passion lies. Years ago, when he bought the Brew Pub, it was the first brewery on the island and among the first in the state. When state law changed to allow breweries to have tasting rooms, it drastically changed how brewers could do business, making their locations more cost effective. Now, customers can sample beer varieties in the public space at the front of the brewery or enjoy a game in the beer garden, as fresh beer is cooking in the back.

Time and hard work has proven that the Hilton Head Brewery is definitely doing something right. With a variety of twelve different flavors from which to choose, Tropical Lager is the flavor that has acquired the largest following in Hilton Head, Charleston and southern Georgia. Growing in popularity is Crab Pilsner, a collaboration with the Crazy Crab Restaurant Group and the Reilley family.

“Tropical has a big rich flavor to it. When you compare it to other big and established brands, it doesn’t come across with a small-town brewery taste,” says one of the brewery’s customers, Alex Brown.

Purchasing a new canning machine is part of his plan to expand his distribution network and make the brand more regionally competitive, as well as increasing his exposure in local restaurants. Ultimately, his goal is to be known as the Island’s beer.

Brewing beer was not what Brantley set out to do years ago, but his success as a brewer proves that he is on the right track. If you’re a beer lover, and like a citrusy taste, then Tropical Lager should be your beer of choice. And who knows? You might even see me drinking a beer one day.