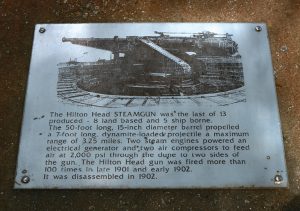 The hottest times in Hilton Head’s history are probably not due to atmospheric conditions but are likely attributable to the fires of warfare. The first two were during America’s conflicts with Great Britain in the Revolutionary War and the War of 1812, and the next was the Spanish-American War.

Following the British capture of Savannah in December 1779 and Charleston in May 1780, English forces attempted to consolidate control of the South Carolina coast, and especially the region between those two cities. Hilton Head was a Patriot stronghold with an active militia that was later given the name the “Bloody Legion” by the Loyalist Charleston and Savannah newspapers due to its far-reaching and disruptive presence in the area. Daufuskie Island and the land along the May River were Tory strongholds, with Royal Militia units working in concert with British regulars out of Savannah. Beaufort had a Tory reputation at the time.

In an attempt to intimidate and reduce the effectiveness of the Hilton Head militiamen, the British launched raids along Hilton Head’s shores. Three landings of combined British and Daufuskie Royal Militia forces in 1780 and 1781 sent patrols along the banks of Skull Creek and Broad Creek, burning deepwater Patriot homes in their paths. Royal Navy warships also bombarded shipbuilding yards on Broad Creek, heavily damaging the only manufacturing industry on the Island prior to the 20th century. The fires from the attacks ravaged the Patriots’ lives but did little to quell their resistance to British control.

A number of historians believe that Patriot resistance in coastal South Carolina, especially between Charleston and Savannah, delayed the advance of Cornwallis and prevented him from taking an earlier opportunity to consolidate his southern forces with those of Benedict Arnold and forces in Virginia, ultimately enabling the Patriot victory at Yorktown. British government resentment toward our local area’s resistance in the Revolution led them to send Royal Navy warships into Calibogue and Port Royal Sounds during the War of 1812 to punish local waterfront residents for their part in the earlier English defeat. 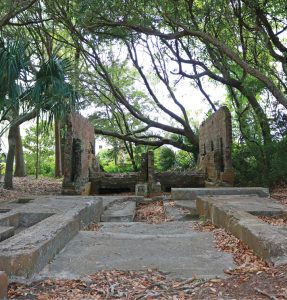 The exposure and vulnerability of coastal population centers to British Naval gunfire during the American Revolution and the War of 1812 brought about a strengthening of the United States’ coastal defenses. At the outbreak of the Spanish-American War, the threat of the Spanish Navy was real, and concerns over inroads that might be made into major American ports caused defenses to be concentrated there. By 1895 Beaufort had become the tenth largest port in the country, and Port Royal Sound required protection. In addition to masonry fortifications at the entrances to several of the largest harbors, new artillery technology was put into use at eleven sites along the Atlantic coast and at the entrance to San Francisco Bay in the West.

The Zalinski Pneumatic Dynamite Gun was capable of firing a projectile filled with 100 pounds of dynamite over 3.25 miles with uncanny accuracy. Since the range of the gun was well in excess of that of the largest naval cannon at the time, ports protected by it removed any threat of enemy naval gunfire. Of the nine placed on the Atlantic coast, one was located on Hilton Head very near the bluff to which William Hilton had given his name over 200 years earlier. Because the dynamite in the shell casing would be detonated by the typical muzzle flash and concussion of a black- 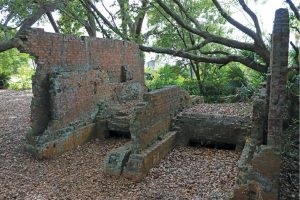 powder cannon, the Zalinski gun was steam-powered. A dual-steam boiler system superheated the water, which fed steam pressure through a cast-iron pipe into the base of the cannon on the seaward side of the dunes. When the pressure reached a certain point in the cannon chamber, the gun was ready for firing. Although Hilton Head’s “Steam Cannon” was never fired at an enemy target, the steam, superheated by the boiler system, was likely the hottest man-made force in our Island’s long history.