Rhonda Davis holds out her hands. They are blue. Indigo blue, in fact. “This isn’t as bad as usual,” she says with a laugh. 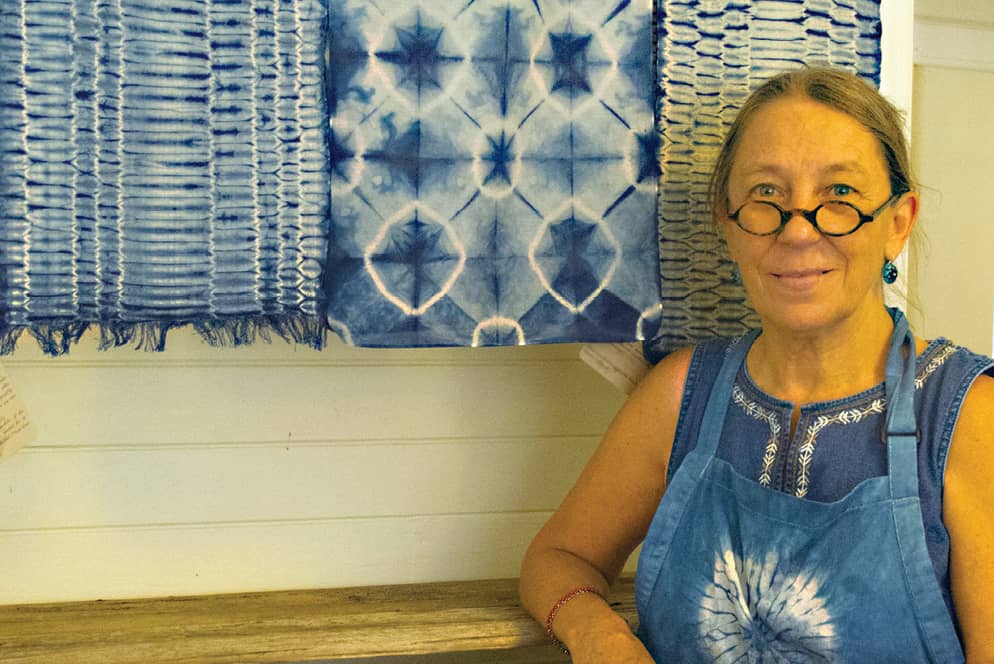 Even if I hadn’t been visiting the former Mary Fields School to write about its storied past, the name “Daufuskie Blues” painted on a sign out front of the old schoolhouse would have lured me in. Now stepping into the old classroom with its dye pots, cutting tools, and design implements, I find the dark blue-and-white scarves, shawls, and tees hanging along the blackboards and walls plus the napkins and tea towels imprinted with sand dollars, turtles, and other designs even more seductive.

“It’s a gift of the gods,” she declares.

Davis’s blue palms, of course, are a product of the dying process. As she talks, she bends over a plastic tub, stirring a dyed piece of cotton with a wooden stick. Lifting it out, she holds up a bright green piece, not the expected blue. As it hits the air, however, it soon oxidizes into the awaited deep indigo. 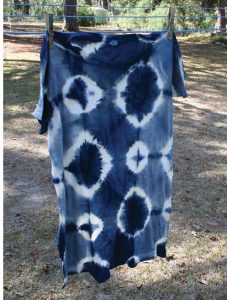 Later when the fabric dries, Davis and her business partner Leanne Coulter, will pull out the stitching used to crimp and bind the fabric to create the distinctive patterns. When they do, like magic, white sections emerge against dark.

As they work, the women explain the color’s historic and spiritual connection to the island. They tell of Eliza Lucas Pinckney and other 18th-century planters who grew indigo along the South Carolina coast. And they talk of the enslaved West Indians who worked the big outdoor vats where they fermented batches of plants, beat them with oars, extracted, boiled, filtered, and then dried the organic mass, cutting them into cakes for the dying process. But the American Revolution would disrupt trade and in the aftermath Great Britain turned to India for its blue fix.

Planters would go on to replace indigo with cotton and other crops here but traces of its long ago “residence” remain. Today, the two fabric artists, who are part of the “slow fiber movement,” use traditional processes and harvest the wild plants from all over the island to handcraft their dyes.

The deep hue, they explain, is associated with ritual and intuition. Looking down at her stained hands and up at their beautiful creations, Davis smiles. “It’s a gift of the gods,” she declares. 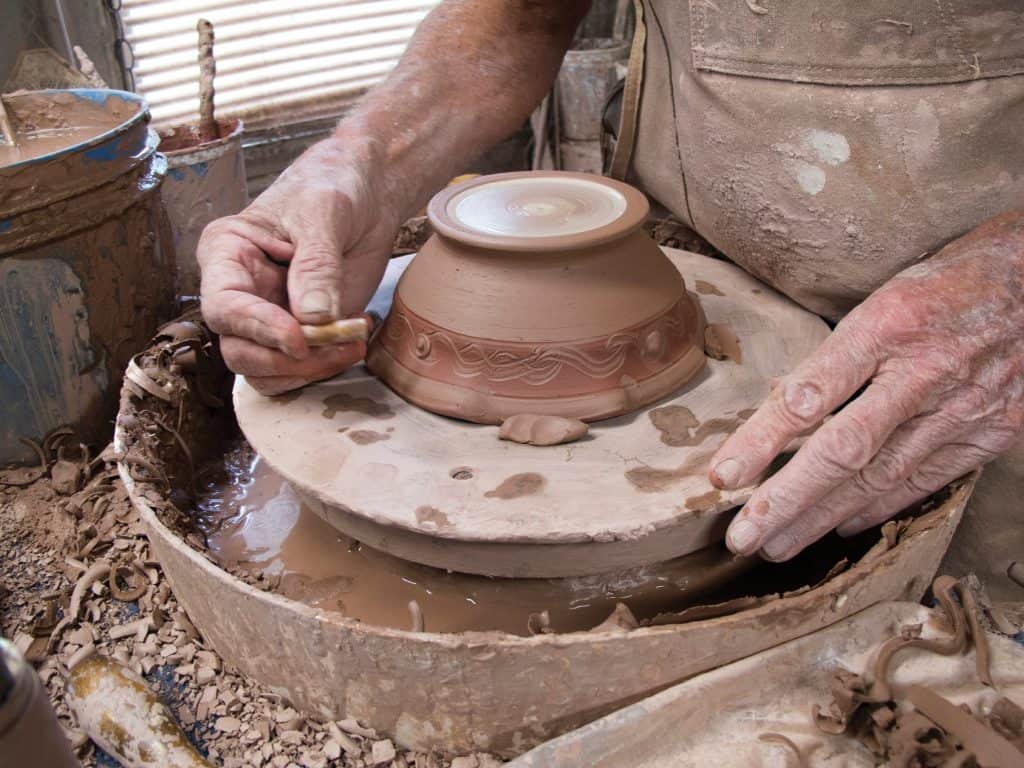 When you buy a bowl, plate, pitcher or cup at the Silver Dew Pottery, you buy a piece of Daufuskie history. Potter Lancy Burn, who grew up on the island, comes from a family rooted in Daufuskie soil. Grandfather Papy Burn moved to the island in 1913 and served as keeper at the Bloody Point 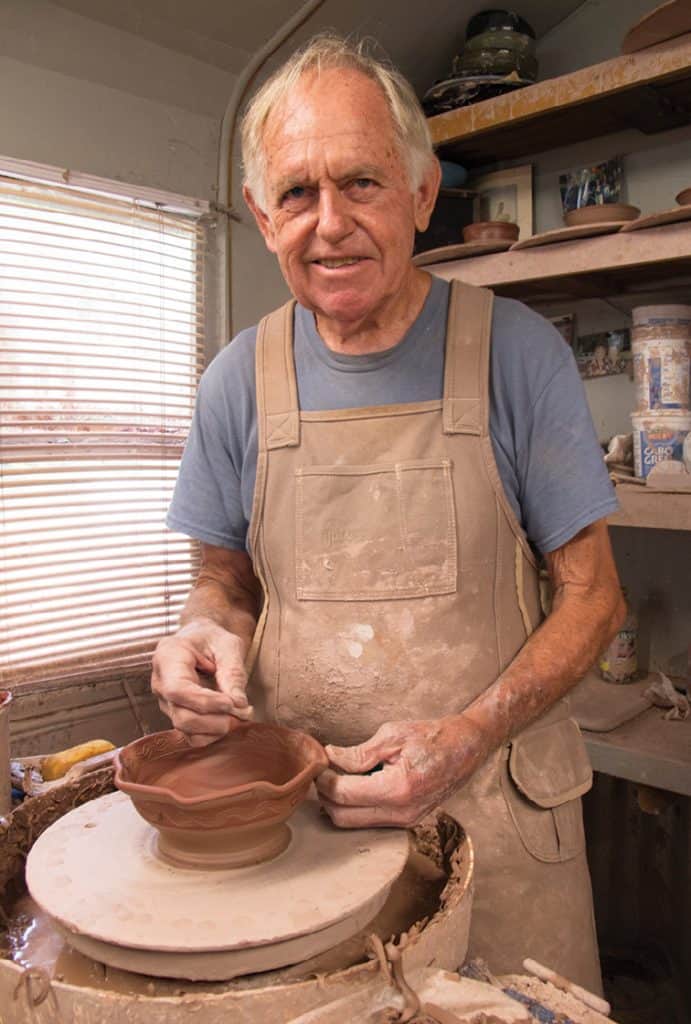 Lighthouse. Then in the mid-1950s, he opened the Silver Dew Winery. Both of Lancy’s parents would have multi-hyphenated careers on the island. For starters, his father Lance served as US mail courier-game warden-roadwork supervisor and his mother Billie as postmaster-school bus driver-author.

Here Lancy grew up combing the beach for centuries-old Indian shards, along with colonial and civil war artifacts. He and his wife Emily opened the studio (named in honor of Papy’s winery) in 1997 and today they incorporate those ancient designs, along with a sprinkle of black Daufuskie sand, into each unique hand-crafted piece.

On my visit today, I find Lancy sitting at his solar-powered potter’s wheel, hands coated in clay, working on a bowl with a wavy-patterned rim. When asked about the pattern, he shows me a shard, which he estimates to be anywhere from 500 to 1,500 years old, that he’s using for inspiration. Then he picks up a short stemmed cylindrical piece with what looks like a sailboat carved into an end that he presses it into to the wet clay, adding that distinctive mark to the design.

On the bottom of each piece, the Burns etch a motif—starfish, palmetto tree, lighthouse, crab, or whatever symbol they’re using for each limited run. Their pottery, all lead-free, is then dated, numbered, and signed by both Burns. And, as a bonus, you might get to hear one of their fascinating Daufuskie stories in the deal.