Being this close to the water, you would imagine that nearly every chef hereabouts has a kinship with our area seafood suppliers. In the case of Jared McElroy, that kinship is reflected in a menu that varies with temperature and tide. Ever changing in all aspects except for its devotion to local seafood, this is a palette that puts local above all others.

“I get the fish that was on the boat the night before,” he said. “It helps put the focus on our local guys, too.”

Because of the sheer variety of seafood that comes from Lowcountry waters, it’s nearly impossible to get all of your fare from one source. The bulk of what makes it onto plates at Hampton Hall Club, however, comes from Russo’s Fish Market.

“I literally drive by there on the way into work,” said McElroy. The market, which recently opened on Red Cedar Street in Bluffton, is run by the fourth generation of Russos, a family which made its name supplying seafood to the Savannah market. In addition to Russo’s, McElroy has procured seafood from all over – Lady’s Island Oysters, Lowcountry Cups and Sea Eagle Market, to name a few.

“Using local fish, not frozen or processed, the flavors of the ocean are evident,” he said. “That’s what you want people to appreciate.”

Because of his devotion to securing nothing but the freshest seafood, McElroy can keep dishes simple, letting that natural salty sweetness of our waters do most of the heavy lifting.

“We don’t marinate it at all,” he said. “Salt, pepper — we keep it simple. If you put anything in there, it should harmonize with the dish. It shouldn’t offer a loud flavor. You want it to be the backup and elevate the main flavor of the dish.”

He points to dishes like an Asian-inspired dish that paired jasmine rice with a local fish fumet, fresh herbs and a few simple ingredients, or the shrimp cocktail where the sheer flavor of local shrimp means the cocktail sauce is hardly necessary. It’s part of his dedication to letting the flavors of local seafood speak for themselves. “Local shrimp are so sweet in comparison to the frozen American ones. When you see someone order them blackened, it kills a little part of you,” he said with a laugh. “You do it in a way where they can just enjoy this beautiful piece of seafood at its height.”

That said, there are a few clever ways McElroy has found to add a bit of flavor that are both harmonious and bold at the same time. One example is the Creole-style barbecue sauce you’ll find in the recipe on page 93. “There is just a ton of flavor in that,” he said. “It’s super messy, and you get sauce all over your hands as you’re eating, but members love it.”

Catch of the day 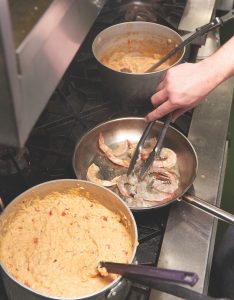 While the quality of shrimp year-round has improved immensely in recent years, and they remain the go-to staple for seafood dishes, they are not alone on the menu. Our local waters are teeming with life, each species of which offers its own unique flavors to a dish. Two of McElroy’s favorite catches of the day, golden tilefish and wreckfish, might not be the most well-known fish in the sea, but in his kitchen, they are stars.

“Golden tilefish might be one of my favorites,” he said. “It has this firmness and a nice flake to it. It’s as if a halibut and a snapper had a baby. That’s a fantastic fish. Wreckfish is an ugly old fish, but it’s a little closer to a snapper-style fish.”

As with anything his suppliers bring in, the point of sourcing out these local fish is to let their natural flavors take center stage. “The thing we do with these fish is let the local ingredients sing, prepare them as simply as possible and let the flavors come out on their own.”

Shrimp: Why you’re doing it wrong

For most of us, cooking shrimp means throwing them in boiling water with some Old Bay until they curl up. And for most of us, that means we’re ruining the experience.

“When they curl up in a tight ball, it means that shrimp have been overcooked,” said McElroy. “A properly cooked shrimp will almost seem undercooked. As you bite into it, it should be super tender and moist.”

His rule of thumb. A straight shrimp is undercooked. If it’s shaped like an O, that stands for overcooked. “A shrimp with a light curve to it is perfectly cooked.” 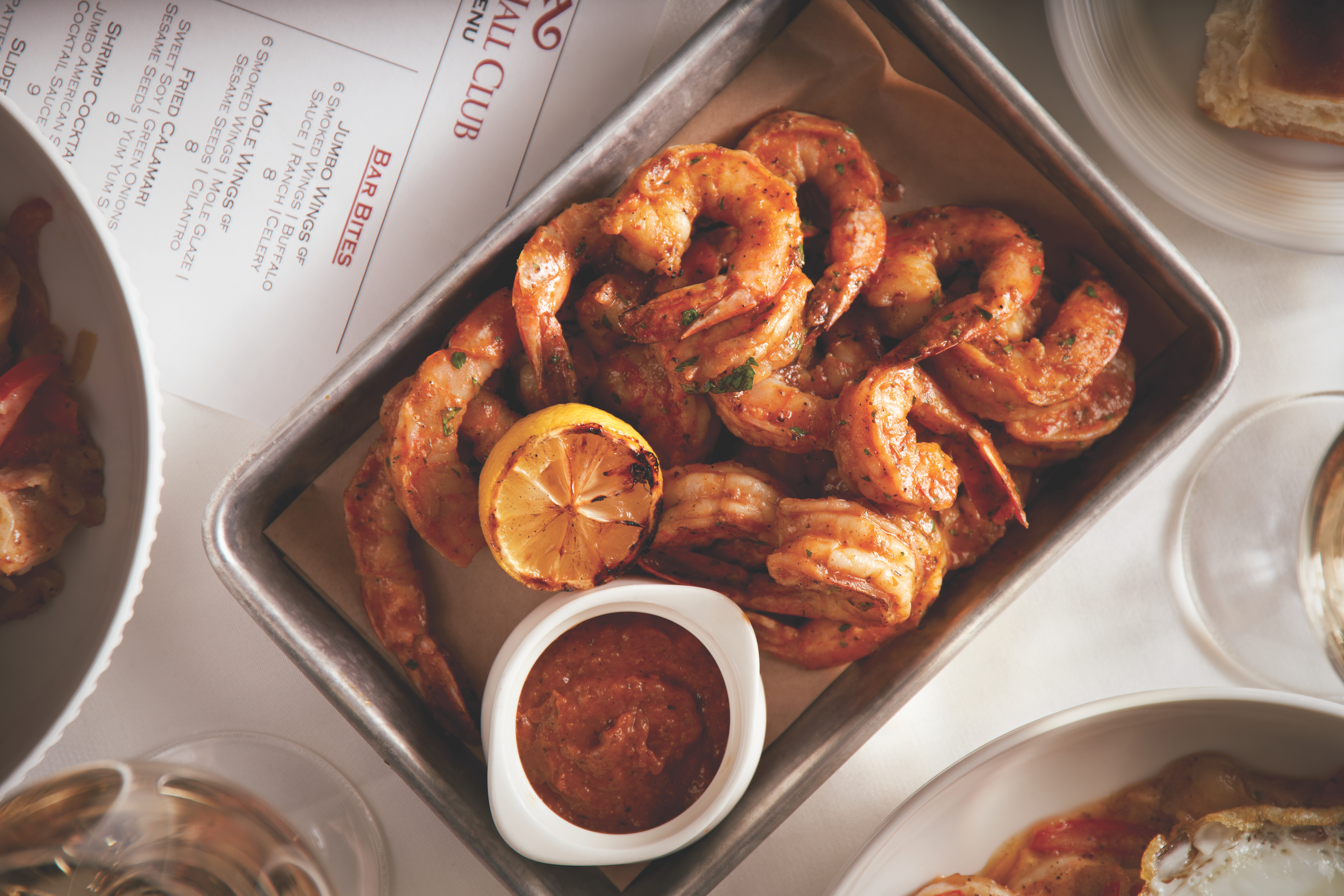 2 lemons, cut in half

Directions [1] In a small 1-quart pot, melt the butter over medium-high heat. Add the onion and garlic and cook until the onions are translucent (about 3-5 minutes), stirring occasionally. [2] Add the blackening spice, paprika, dry thyme and cayenne and allow the herbs and spices to toast in the butter for 2-3 minutes. [3] Add the Worcestershire sauce and simmer for 5 minutes. Remove from the heat and allow the sauce to cool for 5 minutes. Puree the sauce with an immersion blender until smooth. The sauce should puree and form an emulsion. Season with salt and pepper to taste. 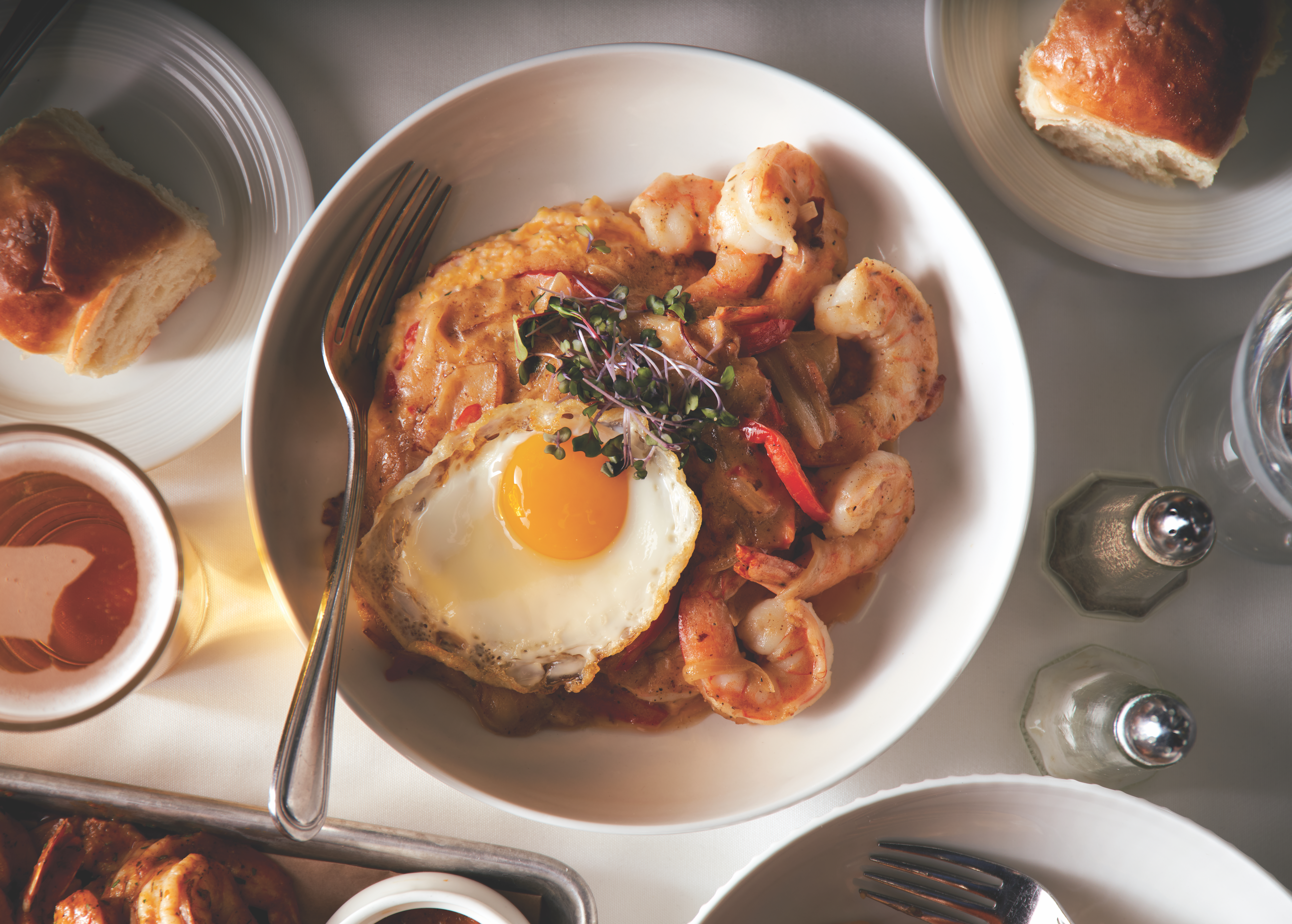 Directions  [1] Heat 2 tablespoons of oil in a non-reactive pot. Sauté the half of the sliced onions and celery until wilted. Add half of the wine and cook until the alcohol is cooked out. Add the shrimp shells and water and bring to a simmer. Allow the stock to simmer for 30 minutes. Squeeze the lemon juice into the stock and add the lemon halves. Simmer for 15 more minutes. Strain the stock. [2] Clean out the pot. Add the diced bacon to the pot. Cook on medium-high heat until the fat begins to render. Reduce the heat and cook slowly until the fat renders off and the meat begins to brown. Add the rest of the sliced onions, red peppers, paprika and thyme and sauté until the onions are tender. Deglaze the pan with the rest of the wine, scraping the bottom of the pot with the whisk to release all of the delicious bits from the bottom of the pot. Whisk in the flour to form a roux and cook for 2-3 minutes, stirring throughout. Whisk in the reserved shrimp stock and bring to a simmer. Allow the gravy to cook for 15-20 minutes, stirring regularly. Stir in the chopped parsley and season with salt and pepper. Remove from the heat and hold. [3] Heat the skillet over high heat. [4] Divide the shrimp into batches that fit in one layer in the skillet and season with salt and pepper. Add oil to the pan and then add your first batch of shrimp. Allow the shrimp to sear for about 1 minute and then turn the shrimp over. Sear the shrimp for another minute. As the batches finish cooking strain off the oil and then mix the shrimp into the bacon gravy. Continue until all of the shrimp are cooked. [5] To serve, spoon pimento cheese grits in a bowl, arrange the shrimp around the grits and then spoon some of the gravy over the top. For brunch, top off the dish with a sunny-side-up fried egg.