Secret spot off the beaten track 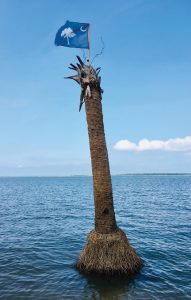 I’ve always loved St. Helena Island. With chickens running alongside the road and people selling coolers of shrimp, baskets of veggies, or even boxes of brand-new shoes on card tables in their front yards, it still feels like the country. But more than that, it feels like Gullah country. The old stories of root doctors seem real, and I can taste the red rice and okra soup.

I’d heard about Land’s End Beach — and the legend of the Land’s End Light, a ghostly orb that haunts hapless travelers under the old hanging tree at night — but I’d never been there. So my plan was to travel Land’s End Road from start to finish, checking out any intriguing side roads on the way. After passing the redoubtable Penn Center — first school for formerly enslaved Africans in the South and an important cultural hub today — I pulled over at the Chapel of Ease. Its old tabby walls, bleached white and warmed by the sun with shells eroding out like wafers, emitted a sense of peace. 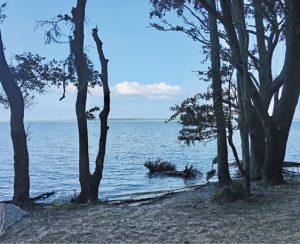 A bit further on, I turned down Sam Doyle Drive just because I’d always loved this iconic folk artist. A St. Helena native who lived from 1906-1985, Doyle attended Penn School until the 9th grade, then went to work in various trades while at the same time pursuing his love of art. He painted on scrap materials such as corrugated tin and plywood, depicting his subjects in flat, balloonish figures. Men plowing with mules, a grandma in her armed chair, reverends and root doctors, bawdy women and St. Helena’s first midwife — they all come to life alongside African American icons like MLK, Ray Charles and Jackie Robinson. Doyle filled his yard with these works, even though the neighbors didn’t understand. He called it the Outdoor World-Wide-International Gallery, and today his paintings sell at auction for tens of thousands of dollars.

My next detour was Station Creek Landing. It has been renamed Buddy and Zoo Landing, after two Beaufort old-timers who once had a fish camp on Pritchard’s Island and were up and down the river a lot. Apart from a nearby rookery of squawky birds, the place was deserted; wide-open sky, marsh grass and reflecting water, plus the buzzing silence of grasshoppers and cicadas, worked to spread a feeling of contentment over me. 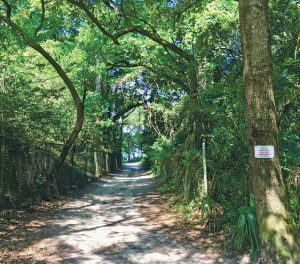 For much of the drive, screens of trees partially shielded vast agricultural fields, including one that had white, hooded beekeeping suits stationed at intervals along the fence. If the effect was as creepy to animals as it was to me, the crops would be safe. I also discovered Bermuda Bluff, where a dirt road made a circle at the end of a little spit, and an old man sat fishing in the creek. “Freckles!” he shouted at his fat dog when it came up running up to greet me.

The further I got down Land’s End Road, the more fish-campy it became, with screened porches built onto RVs and mobile homes jacked up on stilts overlooking little swamps. Décor featured license plates and driftwood, while boats weathered to dingy gray in the yards. Fish-cleaning stations were ringed with innocuous rubbish. You could tell people loved their little community. It took me a minute to find access to Land’s End Beach in this quiet enclave of dirt and shell roads, but once my toes were dipped in Port Royal Sound, I counted the mission a success.

Location: St. Helena Island
Mode of transport: Car
Directions: From Highway 21/Sea Island Parkway on St. Helena, turn right onto Martin Luther King Jr. Drive, following signs for Penn Center. It turns into Land’s End Road.
Travel advice: Plan to do something else fun in the area, such as hit the beach at Hunting Island State Park, visit a U-Pick farm on St. Helena, or have a nice lunch on the waterfront in Beaufort.