Bluffton couple grows most of their own food. 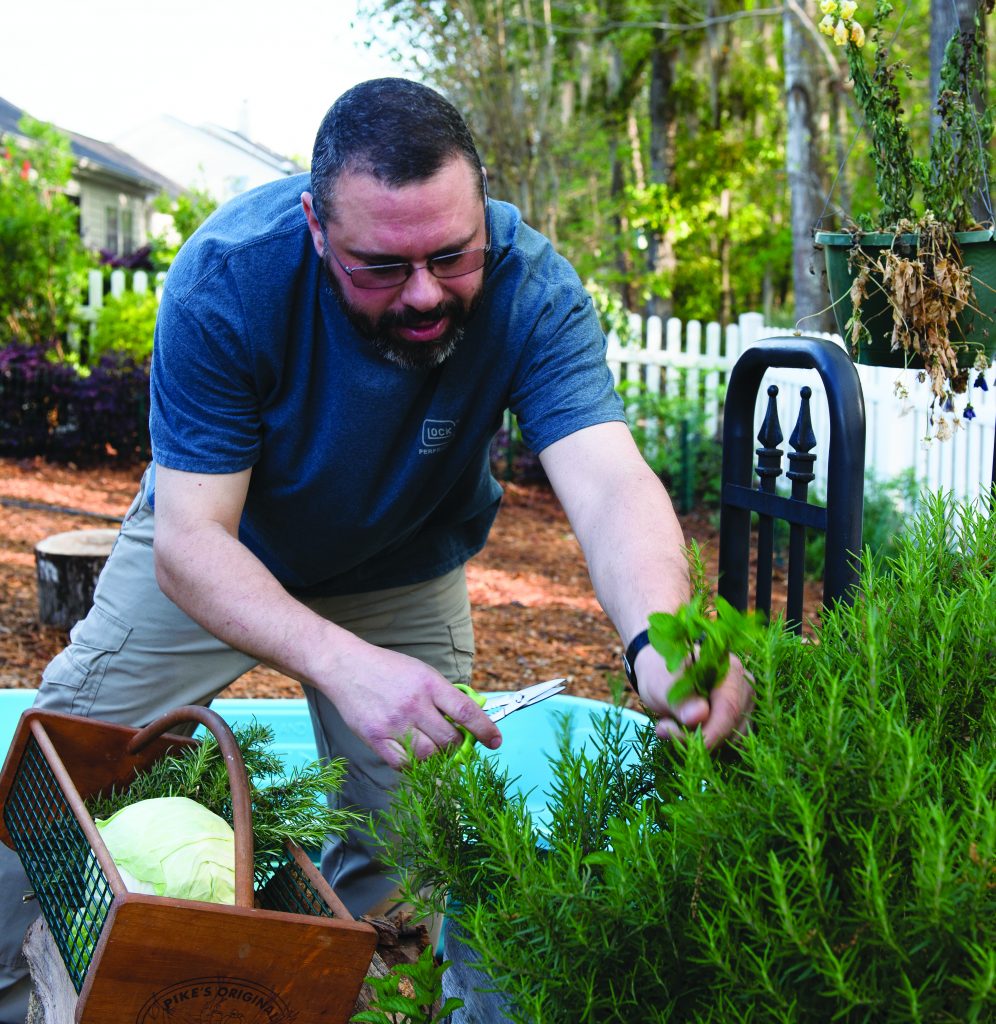 The farm-to-table movement is mostly a nod at restaurants making the commitment to buy and serve local ingredients whenever possible. But for lucky (and hard-working) Bluffton residents Lenny and Angela Giarratano, it’s literally a description of their personal dining habits.

A family friend and farmer allows the avid gardeners to use a hefty portion of his property in Bluffton to grow and harvest whatever they wish. And boy, do they.

Giarratano, who is the executive chef at Moss Creek, says the couple, along with Angela’s father, Chester Pirtle, grows 80 percent of all the vegetables the family eats year-round.

“It’s pretty routine for us to sit for a meal and realize everything but the protein is homegrown,” he says. “That used to be a novelty, but really, it’s commonplace now.”

While it’s difficult in a large commercial operation to source locally for everything — Moss Creek Clubhouse did about $1.1 million in food and beverage in 2018, Giarratano says — the family’s gardening has inspired the way the chef thinks about what goes in his dishes both at work and at home.

“It shifted the way I try to purchase. There are so many logistical hurdles in large commercial operations … it’s really difficult. But it keeps my mind focused on trying to do those things, or sometimes inspires dishes that I can transpose into the commercial side.” 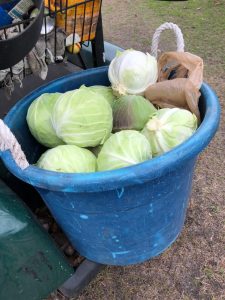 Giarratano says garden vegetables like theirs taste different than mass-produced produce for a very specific reason: They give theirs time to grow.

“Everything really being commercially produced that isn’t on a small-scale artisan farm level is just being produced with one thing in mind: getting up to the maximum ship weight so you can harvest it, get it into a truck and put something else in the ground as fast as possible. It needs to happen quickly, and they fertilize with that in mind,” he says. “Our lettuces are so sweet compared to the commercial lettuce mixes because they’re probably pushing those leaves out of the ground in two weeks, or less. They’re just hitting them with nitrogen and commercial fertilizers over and over, where ours actually get time to mature in the field the way plants were meant to grow, getting the maximum nutrients, sunlight, water. It takes longer, but I think the results are obvious.”

Save It for Later

The couple has a growing room in their home where various vegetables are often drying or being stored. Angela Giarratano, manager at Bluffton Veterinary Hospital, and her father mostly tend the garden, and Lenny handles blanching, vacuum-packing and freezing what they harvest. “This is absolutely year-round, it permeates our life,” he says.

While they’re not into canning because of the sugar involved, they do some pickling of things like okra, cucumbers and radishes. “I’ve dabbled in kimchi.”

Gardening in the South doesn’t have to mean a field full of okra or collard greens. In fact, Giarratano says two perennial winners in their Bluffton garden are bok choy and butternut squash. “You can’t go wrong with bok choy here. That’s not necessarily a local thing, but I promise you it grows like a weed,” he says.

Butternut squash gets planted in early spring and harvested in June, and they last for six months or more when stored in a crate at room temperature. “We’ve never had less than a booming harvest of butternut squash.”

“Legumes in general grow fantastic here,” says Giarratano, who has learned to love a lesser-known pea than its Southern cousin with the black eye. 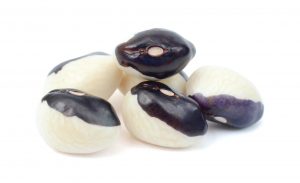 Red field peas are generally a little bit smaller than black-eyed peas, he says. “It’s got a nice creamy, mild texture. To me they’re a little less starchy than a black-eyed pea as well.”

The Giarratanos prefer to keep their gardening as chemical-free as possible. “We do almost no pesticide at all; what we do use is all organic.” They have had good luck with food-grade Diatomaceous earth, a fine, edible powder made of the fossilized remains of marine organisms called diatoms. “It acts as a very natural pesticide for our sweet potatoes.” 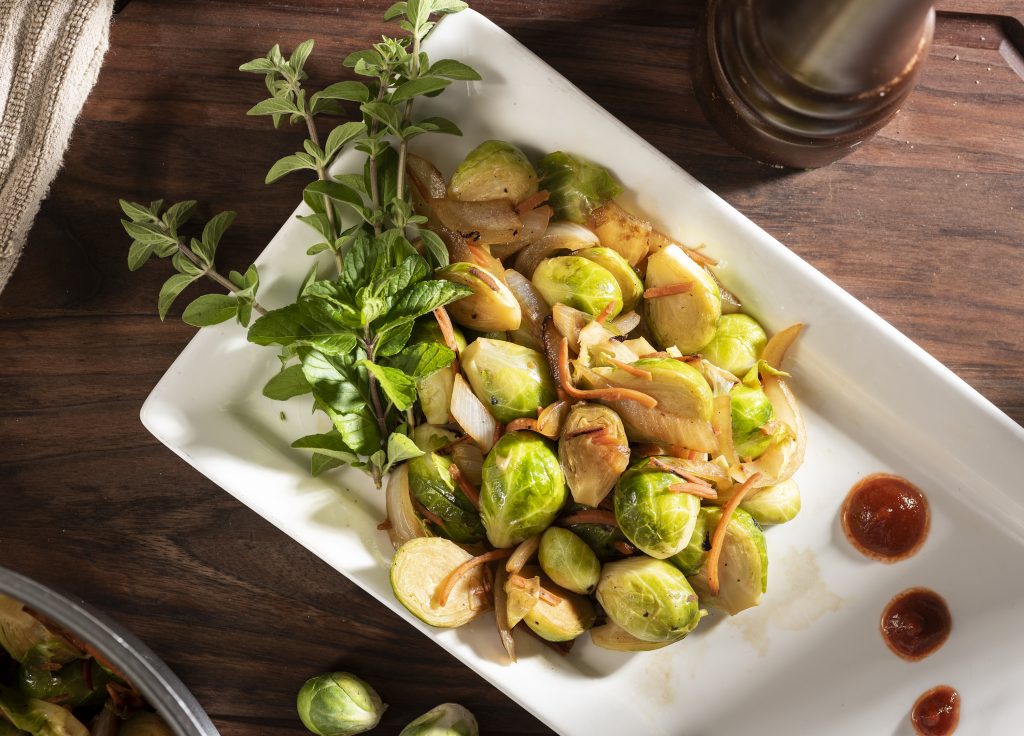 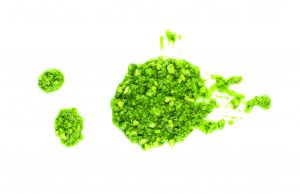 Mix in food processor and enjoy! This recipe excludes Parmesan cheese intentionally as it can be added to whatever you are cooking as appropriate.

Heat the oil on medium heat, add crushed pepper, carrot and onion. Sauté until translucent. Add garlic and ginger. Sauté briefly, add broth and bring to a boil. Stir in soy sauce, lemon and choy stalk. Bring back to boil. Stir in slurry. Bring to boil. Add choy greens. Cook on high for four minutes; then chill in ice bath.

If you’re cooking for a large group or just want to stock up your deep freeze, make this easy and delicious southern favorite. 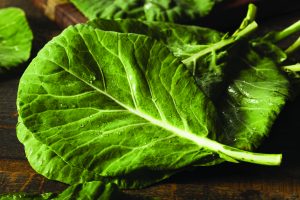 Clean and rib collard greens and cut into 1-inch strips. Combine with the rest of the ingredients and cook on low for several hours.