In an area as varied in its environs as ours, the one connective tissue is the water.

Whether it’s Hilton Head Island’s refined visitor friendly chic or Bluffton’s relaxed and rustic small town aesthetic, they both share our area’s unique ecosystem of winding tidal marshes that snake between tall grass, empty into wide channels and eventually find their way to the ocean.
The waters don’t differentiate between the shores, running in their tidal routes beneath the hulls of million dollar yachts and time-tossed bateaus alike, babbling alongside the fairways of world famous golf courses and fishing docks of generations old river cabins. It is these waters that bind us together as unique but co-existing communities.
These waters carried the first visitors to our shores in the form of prehistoric native Americans. What drew them here is the same thing that now draws friends around a shucking table every evening of every month with an ‘R’ in it: the oysters that live just below and just above its surface.
The history of the Lowcountry is written in oysters. From the shell rings that mark the campsites of the ancients to the scattered spires of tabby ruins that still stand to this day as reminders of an antebellum past, from the world class dining at restaurants built on the site of old shucking houses long shuttered, the briny bounty of our waterways has driven every step.
It’s a humble thing, an oyster. But what it has done for the Lowcountry can’t be measured. And for these three oystermen, it’s meant even more. 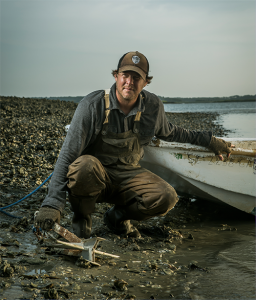 It may be a little on the nose, but it’s true in several senses: Andrew Carmines’ restaurant, Hudson’s Seafood House on The Docks, was built on oysters.

As in, the building itself was quite literally constructed on a bed of oyster shells, meticulously crushed and laid by Benny Hudson one layer at a time by tractor as he turned an old seafood processing plant into one of the island’s first restaurants.
But it’s also true in the more metaphorical sense, although the oysters are just part of it. By virtue of being surrounded by water and being drenched in a history that valued our area’s access to the best seafood, Hudson’s was dock-to-table before dock-to-table was invented.
And Andrew, whose parents bought the restaurant from Hudson in 1975, has made that history his own, creating Shell Ring Oyster Company with the goal of making his restaurant the best place to find locally raised cultivated oysters.
“We’re looking to grow this oyster venture, because I’m really passionate about that,” he said. Already, he’s off to a fantastic start.
While he had already leased several spots for harvesting oysters, (Hudson’s 3,000 gallons annually), the notion of farming oysters began three years ago. The essential difference between farmed oysters and wild harvested oysters is that, like any other farm, you begin with “seed.” These tiny embryonic oysters are placed into bags inside a cage similar to a crab trap, then placed in the water to grow and thrive. The result is a larger single oyster, more suitable for oysters on the half shell than the clumps of oysters you’ll generally see poking out of the water at low tide.
“We put our first seed oysters in the water in May 2015. We harvested around 140,000 oysters the following October, November and December,” said Andrew. “I thought at the time, ‘wow, this is easy.’”
Not that there haven’t been what Andrew refers to as “educational experiences” along the way in the form of lost harvests due to intrusion from wild oysters and buried cages from Hurricane Matthew. But Andrew has persevered and learned even more about oyster farming in his two years, and is looking to eventually get a hatchery and nursery on-site at the restaurant as well as move his farming operation closer to the restaurant.
Not bad for a guy who only earned an “honorable mention” for his fourth grade science fair project on oysters. “Yeah, that’s basically saying, ‘you worked really hard,’” he said with a laugh.
If the fourth grade could see him now, they’d realize that his hard work has paired with a lifetime of expertise to create singularly delicious oysters rooted in Andrew’s love of our local seafood.
“I love our oysters here. From Nov. 1 to March 15, there’s not a better oyster anywhere.” 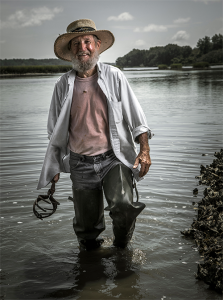 For many, Woody Collins needs no introduction. However, it may help jog your memory if we refer to him by his proper title: Captain Woody.

“The first time I came onto the island was in 1947,” he said. “I was in kindergarten and came over with my uncle.”
It would not be his last trip. The man whose name would one day grace restaurants in Hilton Head and Bluffton began his career on the water in Broad Creek when he bought his first boat. “I called it the ‘Little Shell’ after a girl I was dating at the time. You can get away with a lot if you name a boat after a woman.”
During Collins’ first visit to the island, Benny Hudson was still laying down the foundation of what would be his restaurant. By the time he was shrimping and oystering, Hudson’s had become an island hotspot. “I kept seeing people drive up to the restaurant, wearing these bright colored pants and everything. I knew they were different,” he said. It sparked inspiration in the young fisherman, and he soon opened his own fish market inside a vacant carwash at Coligny Plaza. He rented it on a handshake from Norris Richardson.
“I told Benny Hudson I was going to open a fish market on the south end and keep my boat here,” Collins said. “Benny could be tough. I was kind of hesitant to tell him, but I told him. He just said, ‘Woody, you’ll do real good over there.’”
Eventually, Collins found himself selling off the docks at Palmetto Bay Marina (“We’d have so many people on the dock, their toes would be in the water.”) John Rumsey, one of the marina’s owners, broke the news to Collins that the marina was being sold and developed. He also offered to partner with him on a new seafood restaurant.
After several years, Collins would sell Captain Woody’s, returning to his first love: the water.
“I had the oyster lease in Broad Creek,” said Collins. “I started oystering some while I was shrimping, after the season was over. I always really liked oystering. I liked the guys I worked with and I learned a lot.”
And while the name Captain Woody’s is synonymous with shrimping and fishing, he’s always held a fondness for our area’s oysters, along with the oystermen who work our area’s beds.
“Those local guys are the backbone of the oyster business,” he said. “And the oyster business is an absolutely beautiful thing.” 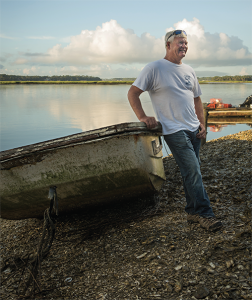 If there is a single family that can lay claim to an oystering dynasty in the Lowcountry, it is the Toomers.

Larry’s roots here run three generations deep, back to his grandfather Simpson V. Toomer, who arrived in the Lowcountry in 1913 to work at an oyster factory on Jarvis Creek. He eventually opened his own, where the north end Crazy Crab now stands, which produced canned oysters and later raw shucked oysters.
Of Simpson’s four sons, three continued in the oyster business, including Larry’s father Frank. And it was among this generation that young Larry got his start.
“My father and uncles had oyster houses on Hilton Head Island, and from 2-3 years old that’s what I remember. That’s where I was,” said Larry. By age 8, he was going out harvesting oysters by himself (as long as he stayed within sight of shore). By 13, he was allowed to venture out further, pulling in 125 oysters a day.
While his uncles maintained oyster houses at Buckingham Landing, Jarvis Creek and his father ran his own on Skull Creek, Larry would eventually seek out other waters in which to build his fortune, heading to Key West, Fla., in 1976 where he worked as a shrimper, buying his own boat just a few years later. For a decade he worked the waters of the Gulf Coast before returning to the Lowcountry.
He’s called the Bluffton Oyster Company home since 1993, when he was brought in to run the place by the Reeves family. The last oyster shucking house in a state that once lived and died by its oyster industry, the factory had been a Bluffton landmark since the early 1900s. A beautiful park now surrounds it on county owned land Larry leases.
As a member of the Bluffton Town Council, Larry has fought diligently for 15 years to protect the waters that have given so much to his family. He’s put contamination in the May River under the microscope – both metaphorically and literally – in his quest to keep our water clean.
“Pollution will kill us all if we allow it to happen,” he said, noting that he’s helped get funding for studies into contamination in the May River. Those studies have overwhelmingly shown that people are to blame — particularly, septic tanks and drain fields on waterfront areas.
“We’re building a solid platform of DNA evidence to prove it’s the human presence. It’s a hard, complicated battle, but we’re winning.”
For a family dynasty built on the pristine waters of Beaufort County, it’s a battle worth fighting.