Tips for bringing home and cooking the best

These artificial nitrites are used to give the meat its pink color, maintain its flavor, prevent odors and delay bacteria growth. “Uncured” bacon typically uses sea salt, various flavorings such as parsley and beet extracts, and some form of celery, which contains natural nitrites. So, is one better for you than the other? Experts are still unclear on the answer. Anything artificial is probably not best to put in your body, but it’s still unknown if the natural nitrites that occur in celery are less “harmful.”

There’s also the big turkey versus pork bacon debate. The turkey version does have fewer calories than the pork version, which is a plus, but if you’ve ever tried to make bacon-wrapped jalapenos with turkey bacon, you’ll know that it doesn’t quite form the same or get as crispy as the traditional kind. There are tons of pros and cons to each, and it will probably come down to taste preference or crispiness preference, but here is a quick look at the nutritional information:

When it comes to cooking bacon and knowing the best to buy, we asked two local experts for their advice. 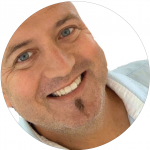 Dave Peck at Bad Biscuit shared with us his favorite way to cook bacon:

“My personal favorite way is in the oven. I line a baking sheet with foil to catch any grease, place the bacon on it close together, and bake it at 425 degrees until it’s browned. You have to flip them over about halfway through the cooking process. Drain the bacon on paper towels, and once the grease cools down, you can throw away the whole sheet of the foil that has grease on it. Very simple to clean up. I usually eat all the bacon before I can use it on a BLT.” 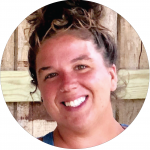 Marissa Paykos of Whippoorwill Farms shared her bacon-wrapped thoughts with us, as well:

“Quit looking for bacon without fat on it. The fat is what has the most flavor. There’s a difference between good fat and bad fat. If you buy bacon from a local farmer that raises pigs outside in the sunlight, it’s going to be full of vitamin D and omega 3 fatty acids. It really has the same characteristics of olive oil and avocado — the good kind of fat. Be sure to find a reputable store or local farmer that you can purchase from. You’ll also find that the contents of local bacon is going to be so much higher in flavor and nutrition compared to pre-packaged bacon that you buy at the store. We don’t cure our bacon — we just use sea salt and brown sugar rub. No nitrates or nitrites. When it comes to cooking it, we like to use the air fryer. It comes out nice and crispy, and you don’t have to worry about making a mess. We then take the grease from the bottom of the air fryer and put it in a jar to use for later. If you get it with a lot of fat, save the grease. It’s great to cook with and good for you.”