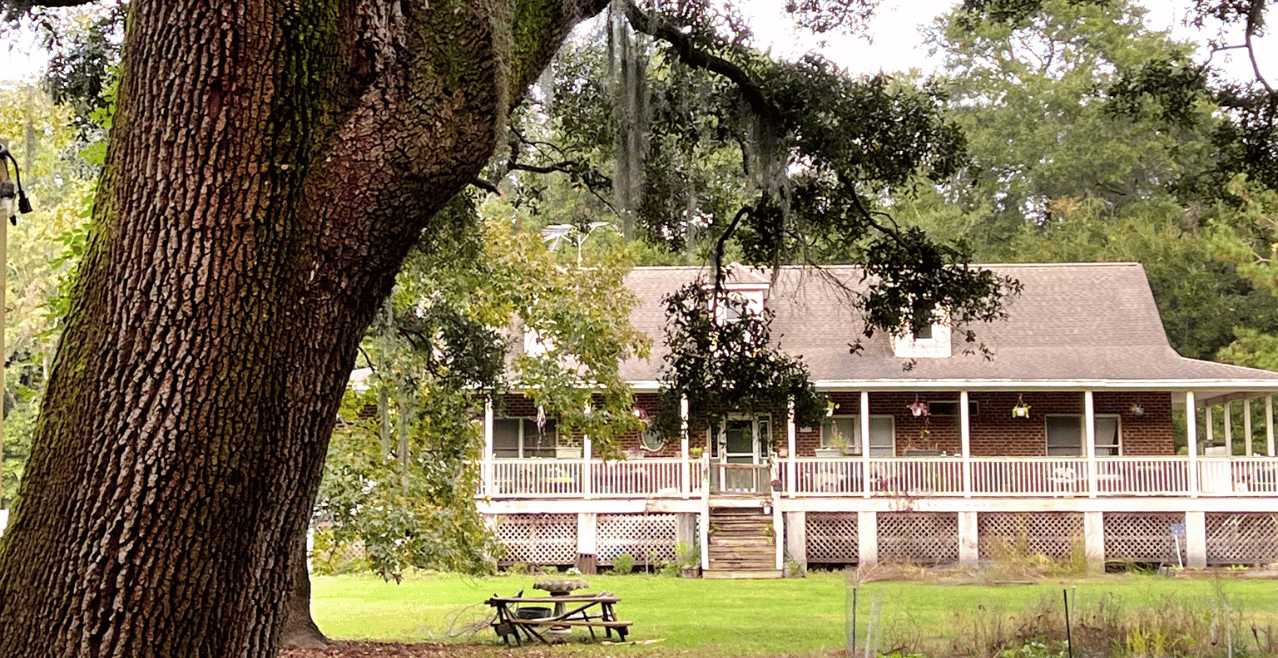 This family farm on St. Helena Island embodies the history and customs of Sea Island residents. 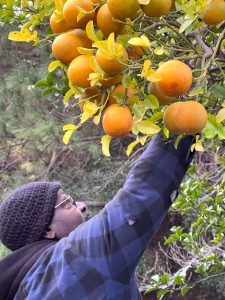 I wasn’t expecting to be escorted around Morning Glory Homestead by two tom turkeys. But here we are — Belinda and Tony Jones and me, making our way across their big yard, maneuvering amid waddling ducks and pecking chickens, both groups oblivious to the cat that is prowling by the mulch pile. We’re headed toward a clearing in a corner of their 12.4-acre farm, our progress punctuated by the crowing of a rooster in the distance. Past the wooden shacks, dubbed Coopville, where the Joneses collect fresh eggs each morning, we pause at the wire fence where a litter of piglets are comically tumbling all over each other as they jockey for a primo viewing spot.

Soon the three of us arrive at a stand of tall live oaks strung with white lights. This is where the action takes place. Several times a year, visitors arrive an hour before dusk to gather around fire pits for Gullah Campfire Suppers. Their drive out to St. Helena and down a rough dirt road is rewarded with an evening of lively talks about local history and customs, food, storytelling or whatever intriguing subject the Joneses have chosen to focus on that particular evening.

Depending upon the evening’s topic, attendees might hear from historians, farmers, community activists, writers and storytellers. Then, as the moon and stars begin lighting up the sky, the Joneses sing favorite local songs including old spirituals from Slave Songs of the United States, many of which were collected around the Sea Islands by abolitionists during and after the Civil War.

Afterwards visitors feast on a groaning board of Gullah farm-to-table fare set up at one end of the clearing. They can choose and sample dishes like collard greens, cornbread, shrimp and grits, okra, chicken, peach cobbler, not to mention salads and vegetables from the Joneses’ garden –– before making their way back to tables surrounding the crackling fire.

Each supper is themed. For one celebrating Black History Month, the featured author was Robert Middleton, who told tales of growing up Gullah, his student years at Penn School and his later stint as docent at the York W. Bailey Museum there. For that evening’s meal the Joneses, who always spotlight a dish made from a traditional cookbook, chose “Mess O’ Greens” (a salad of garden greens tossed with a warm vinaigrette and pecans) from Country Living Cookbook by Dori Sanders, one of the state’s oldest Black peach farmers.

Natural foods and sustainability is the gospel the Joneses preach, whether giving tours of the farm or staging events. This past October their “Farm and Field to Table: Fall Mushroom” event centered on Black agricultural scientist Dr. George Washington Carver (1864-1943) and his work in mycology, the science of fungi. Along with talks by St. Helena mushroom grower William “Bubba” Green and certified forager and chef Alex Curtis, Belinda spoke about Dr. Carver’s discoveries in that field. That afternoon’s culinary treat was a butternut squash and mushroom risotto dinner Curtis cooked over an open fire. 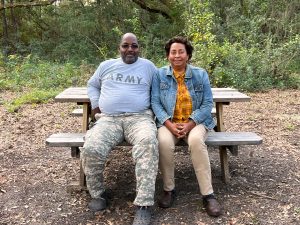 Establishing Morning Glory Homestead has been a voyage of discovery and exploration of the Joneses’ own Gullah roots. In fact, the land we’re standing on now was part of the McTureus Plantation, where his ancestors were enslaved. During Reconstruction his family bought this acreage. But for Tony, who’d spent his childhood in Burton, his Gullah heritage had all been in the hazy past. “Growing up Gullah in this area, you were often chastised and discouraged from speaking Gullah because our parents and teachers wanted us to speak standard English,” he explains. Meanwhile, Belinda, who was raised in Orangeburg, hadn’t known much about her own family’s Lowcountry history.

The couple met at South Carolina State University, and after graduation Tony’s twenty-year Army career would soon take them to different parts of the country and Europe while they raised their five children. When Tony’s parents, Robert and Clara, first offered the Joneses the property, Tony and Belinda had shrugged. But then after Tony retired from the military in 2001, their life took a dramatic turn when they decided to move onto the land.

So began their great adventure. As Belinda home schooled the children and Tony worked a series of jobs, the entire family began exploring St. Helena, immersing themselves in local history. “I never heard the word Gullah until we moved here,” Belinda admits. So along with Tony, she began delving into her own family history and learned that her great -great-grandmother had been enslaved on a plantation near Charleston. 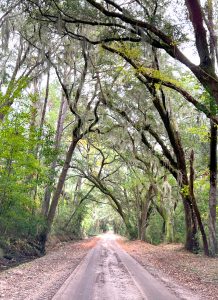 Over the years the Joneses began developing Morning Glory Homestead with an eye to sustainable farming and traditional crops. The children joined in with 4-H projects, raising melons and tomatoes and starting an organic egg business. Today, with their children off on their own careers, Tony and Belinda have branched out. Not only do they sell produce, poultry, eggs and baked goods online, but they lead Gullah, agritourism and animal husbandry experiences for school groups and the public. Their other offerings include Hunting Island nature walks, fishing outings and tours to historic St Helena spots like the Coffin Point Praise House, Brick Baptist Church, Penn Center and points beyond.

Before I leave, Belinda disappears into the trees and returns holding a spiky African jelly melon by its stem. Taking it gingerly (those spikes are sharp), I examine it. When it turns ripe, she tells me, it can be sliced like cucumber. Then Tony hands me a Meyer lemon. He tempted fate to pluck it because the tree sits precariously close to one of the beehives that produce the farm’s raw honey. Beyond the small orchard are the hoop house, the goat pen and the plots where dinosaur kale, chard, basil, okra, peppers and seasonal greens grow. Nearby a stack of lumber lies ready for a new project, a smokehouse.

After taking a quick look at one of the wooded campsites that the Joneses list on Hipcamp, it’s time for me to head back out. The turkeys, who’ve kept pace with us, accentuate our goodbyes with high-pitched gurgling sounds, while the chicks and ducks continue their perambulations, seemingly uninterested in the human intruders amongst them.

For a parting gift Tony ambles over to a big grassy plant and pulls off three yard-long blades. “Smell the ends,” he says as he hands them to me. I do. Lemongrass! In the car I place them on the seat next to me and enjoy their scent all the way home. 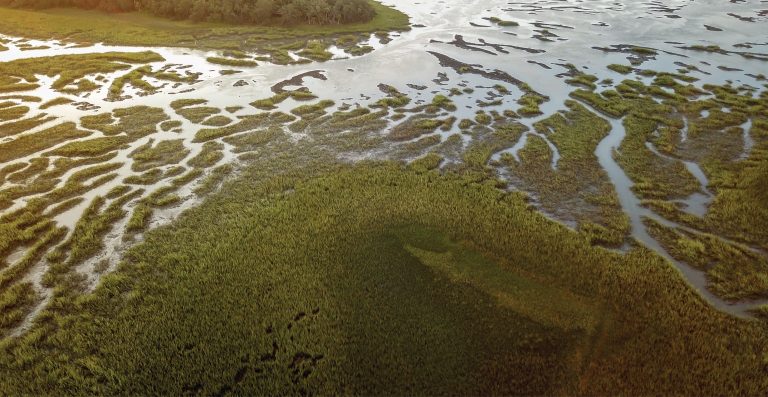 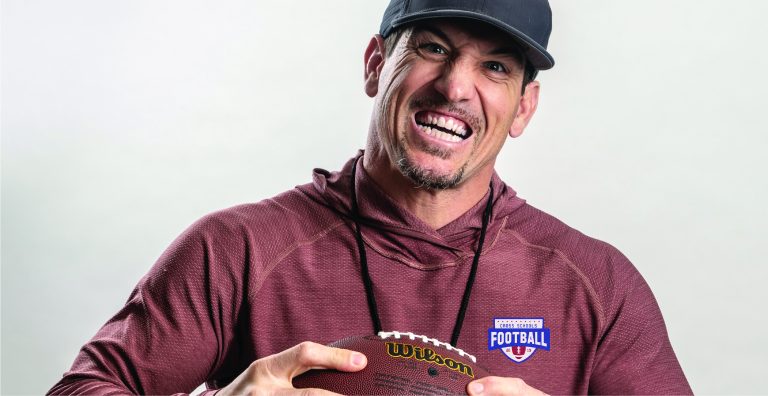 “The kids won’t care how much I know until they know how much I care.” Story by Dean Rowland &… 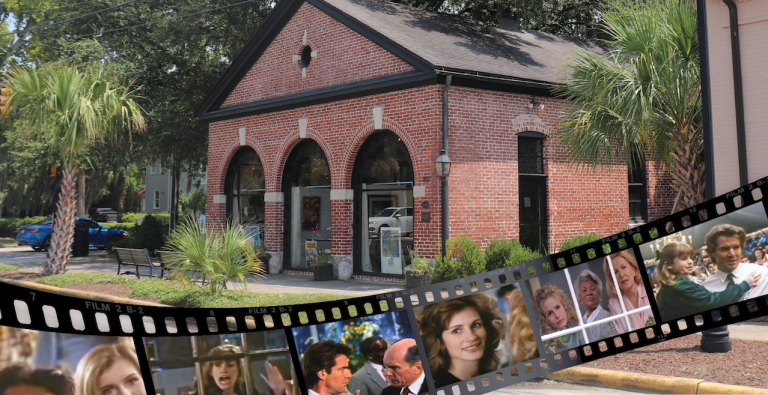 A look at the Lowcountry’s starring role in the movies. Something to Talk About (1995) The cast Julia Roberts as… 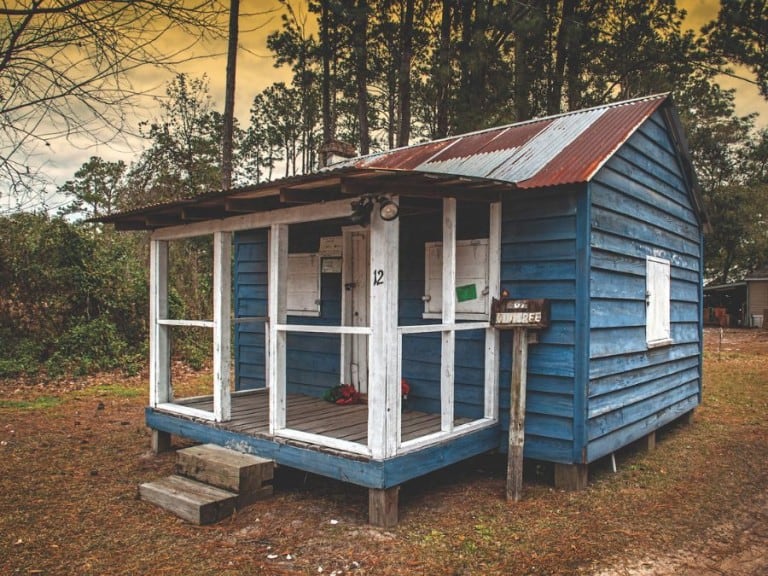 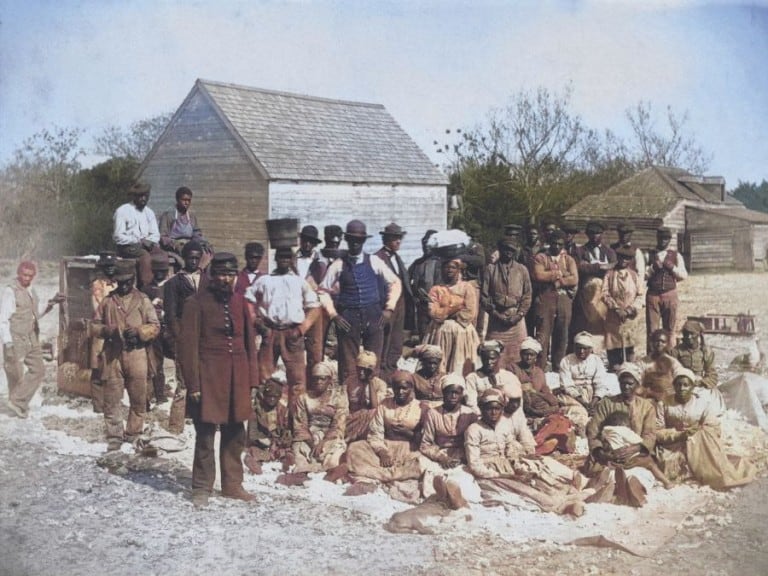