On Oct. 8, 2016, Hurricane Matthew caused widespread destruction on Hilton Head Island and in Bluffton. The weeks and months that followed saw the Lowcountry dig itself out from beneath a mountain of vegetation and debris.
Our area’s waters were hit just as badly as the land, and as recovery focused on repairing and rebuilding homes and businesses, area oystermen were forced to miss out on the height of the season.
“We were shut down for the entire month of October,” said Austin Harter of May River Oyster Company.
In fact, South Carolina Department of Health and Environmental Control had shut down all oyster and clam harvesting statewide three days before the storm hit as a precautionary measure. Heavy rainfall ahead of the storm carried with it the strong possibility of contamination from runoff. With the closures, that year’s Bluffton Arts and Seafood Festival went on without its traditional oyster roast.
And on Hilton Head Island, Andrew Carmines saw his then-fledgling oyster farm almost entirely uprooted by the storm.
“We lost 80 percent of our shell stock after Matthew,” Carmines said. The shifting sands on Carmines’ oyster lease tend to shift fairly regularly, a slow churn he can usually mitigate by lifting the cages and setting them up on top.
“When we had the hurricane, we had three months’ worth of sand pile up. Plus, we didn’t have a low tide for three days after the storm so we couldn’t get out to them. A lot of them got covered up and suffocated.”
No such damage was reported following Tropical Storm Irma. 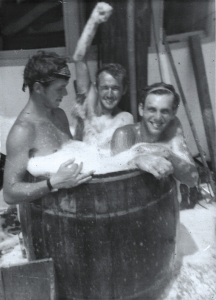 While compiling all of the oyster information for this issue, we stumbled across this intriguing photo of Captain Woody Collins (center). We asked him to explain: “There were two locally famous fishermen there and myself. Captain Stratty Pollitzer (left) and captain Billy North (right). Both of them were well known local fishermen and loved by many. Stratty’s son Christian and Christian’s son Stratton continue in their fathers’ footsteps — they are both professional charter fishermen on Hilton Head. The picture was taken about 1972 on the F/V ARENAS. We were all commercial fishing together for snapper and grouper. The barrel was a ‘chill’ barrel. Salt water and ice was put in it and we would put freshly caught fish in there to pre-chill them before icing them down in the hold of the boat. If you look at Stratty’s face carefully, he has a concentrated look about himself. That’s because he was using the other hand to relieve himself on Billy’s leg. Pure Stratty humor. He was always the life of the situation. When we were out fishing, we would actually take baths (separately) in the barrel.”

What’s in a Name?

In Virginia, they’ll tell you there’s nothing like a Chincoteague oyster. On Long Island, you’re eating Blue Point oysters or nothing.
So what’s the difference between the two? From a physiological standpoint, nothing. Up and down the East Coast, no matter what regional name they’re given, you’re eating the same animal: Crassostrea virginica, the eastern oyster.
“What makes them different is the salinity of the water, the minerality of the water, the bottom structure, the wave action, the tide influence, the water temperature, and so on,” Carmines said. “All those factors make an oyster from Hilton Head Island different from an oyster on Long Island. And it creates that sense of place where you’re eating them.”

Prior to the late 80s, if the Department of Health and Environmental Control (DHEC) came in and shut down an oyster bed, it was shut down. “There was no discussion or any way to appeal that,” local oysterman Woody Collins said.
After DHEC shut down Collins’ beds on Broad Creek around 1982, Collins was approached by fellow local Bill Marscher, who asked Collins to speak to area groups about his plight. Eventually, Marscher formed a group called the Clean Water Taskforce that took on DHEC, forcing it to change its closure process.
“They took this on and made it into a fight,” Collins said. “They reversed the whole course of how DHEC does things, cleaned up Broad Creek and got it reopened.” After a four-year process and a visit from South Carolina’s governor, the Clean Water Taskforce enacted sweeping changes to how our area’s waterways are governed and regulated, including the creation of stormwater utilities and runoff control.
“Bill Marscher did more for Beaufort County than anyone I know, and for no personal gain,” Collins said. “He did things selflessly.”

How do you take your Oysters?

There are as many ways to prepare oysters as there are names for oysters. You can fry them, steam them, roast them, smoke them or just slurp them right off the shell. So which way is the best?
“I’ve probably cooked them 20 different ways. Most people around here like them roasted, but I like them raw with nothing. Maybe a little hot sauce,” Bluffton Oyster Company’s Larry Toomer said. “People ask, ‘Are the oysters OK to eat raw?’ I tell them, ‘Check the obituaries. If I’m not in there, they’re still good. Because I eat them every day.’”
Although, he added, “A fried oyster and a plate of cheese grits is hard to say no to.”
One new twist on the old tradition is something that Carmines calls a “Carolina Rooster.” Lightly smoke your oysters (5 to 7 minutes at 220 degrees so they’re still nice and moist) then serve on a saltine with a dab of horseradish, a dab of cocktail sauce, a slice of jalapeno and a dash of hot sauce.
“It gives you this slight smokiness, along with the saltiness and the heat,” Carmines said. “I love smoked oysters; that’s such a Southern delicacy.” 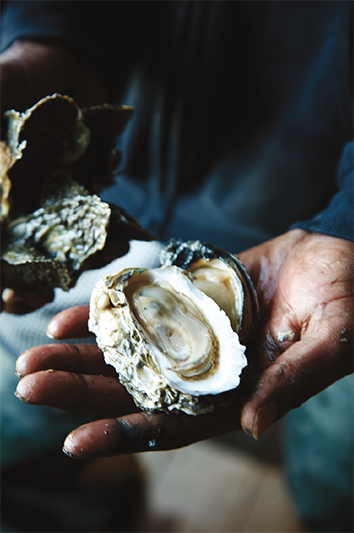 While oystering in the Lowcountry goes back well into prehistory, its methods have changed over the years. From the native American days of hand-carved canoes and handpicking to the old cannery innovations of steamers and shakers, innovation has always played a part in oyster harvesting here.
But sometimes, the old-fashioned ways are still the best ways.
Richard Mitchell has been oystering on Hilton Head Island for 67 years, working for himself on his Broad Creek lease for the last 10 to 15 years. The epitome of old school, he holds to the traditional methods of oyster harvesting he first learned years ago.
“You have to pick oysters by hand, one at a time. Nothing ever changed with that. Nothing’s going to change with that,” he said.
That said, there is a new school on the rise in the form of oyster farming. May River Oysters is one of the firms around here pioneering this new art in oystering. In its third season of operation, May River Oysters gets 2-3 millimeter seeds from a Lady’s Island hatchery and then grows them to size in the May River.
“There are a lot of farmers up north who have been doing this for 20 years,” local oysterman Andrew Carmines said. “I have them in off-bottom gear, like a modified crab trap; they grow in a contained environment for their entire life.”
The result is an oyster that grows 360 degrees, wide and deep, without having to compete with other oysters in a cluster.

The History of the Oyster, Part 1

You remember the gold standard, right? But did you know there was at one point in history an oyster standard? The Roman Denarius, a silver coin roughly equivalent to a day’s wage for most laborers, was at one point based on the value of a single oyster.
This came during the 284-305 A.D. reign of Emperor Diocletian when oysters became so scarce that armed guards were posted around oyster beds. As an interesting corollary, oysters would once again need armed protection when, in 1970, an agent of the shellfish section of the South Carolina state board of health was attacked by a group of oyster poachers he’d come upon. A resolution in the statehouse shortly after required shellfish agents to be armed and trained. 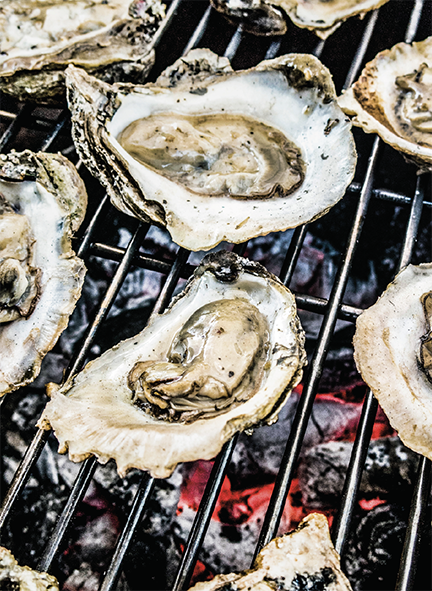 Tradition has long linked oysters to romance, ever since the goddess of love herself, Aphrodite, surfed an oyster shell into a Botticelli masterpiece.
But about those rumors that oysters are an aphrodisiac? Turns out, they’re no more an aphrodisiac than green M&Ms (another reputed, and debunked, aphrodisiac).
That said, there have been strong scientific links between zinc deficiency and erectile dysfunction. And guess which delicious morsel of the deep comes packed with zinc? You guessed it: oysters. We’re no doctors, but if you really needed a reason to eat some oysters, you now have science backing you up.

The History of the Oyster, Part 2

Here on Hilton Head Island, you’ll find a number of ancient shell rings, the last remaining markers of the prehistoric native Americans who came here following the seasons.
These shell rings are remarkable not only in that they give us insight into a prehistoric culture of hunter-gatherers, they also intrigue us with the mysteries of history. Many theories have been formulated as to why nomadic tribes would create such structures, tall berms arranged in a large circle sometimes several feet high, and each has been in turn shot down. Did they hold some ceremonial significance? Were they simply a way to mark a particularly good campsite after a season away? Is that just how they kept their garbage out of the campsite? The answer has been lost to antiquity.

The History of the Oyster, Part 3

Tabby ruins can be found all over Hilton Head Island, the last reminders of Antebellum ingenuity in creating a concrete-like substance from the abundant oyster shells found throughout the Lowcountry.
The recipe is complicated and labor intensive, but essentially you just crush and burn oyster shells until you get what’s called “quicklime.” This quicklime is then mixed with sand, water and more crushed oyster shells until it forms a mixture which can be poured into molds and used like bricks.