April 2006-June 2008 Art Boy is in deep trouble. Again. The left side of the wooden platform stage is shaking. The crowd is pumped. Bands like Hannah Wicklund & The Steppin Stones, Kelly Graham’s percussion trio and Audio Tuxedo are rocking the sleepy streets of Old Town Bluffton, which at this time has a handful of shops and art studios tucked into its old buildings. The merchants are just starting to see this one-square mile’s potential as an arts and culture center while hoping to throw off the town’s past notoriety as a speed trap on the way to Savannah. They’ve set up a street fair on the third Fridays of each month, and artist Amos Hummell has carte blanche to put on a wild and wacky outdoor extravaganza, a veritable explosion of color and sound that encourages, and some may even say incites, audience participation.

Meanwhile, the band has packed up its instruments. So it’s “curtain up” on the Living Colors main stage. What predicament will Art Boy get himself ensnared in tonight?

[Here it should be noted that what I’m about to tell you about here sprung from artist Amos Hummell’s fevered brain and was aided and abetted by his wife, Lynne, and their sons, Chandler and Clark, along with an assorted collection of Lowcountry accomplices, with some with familiar names.] 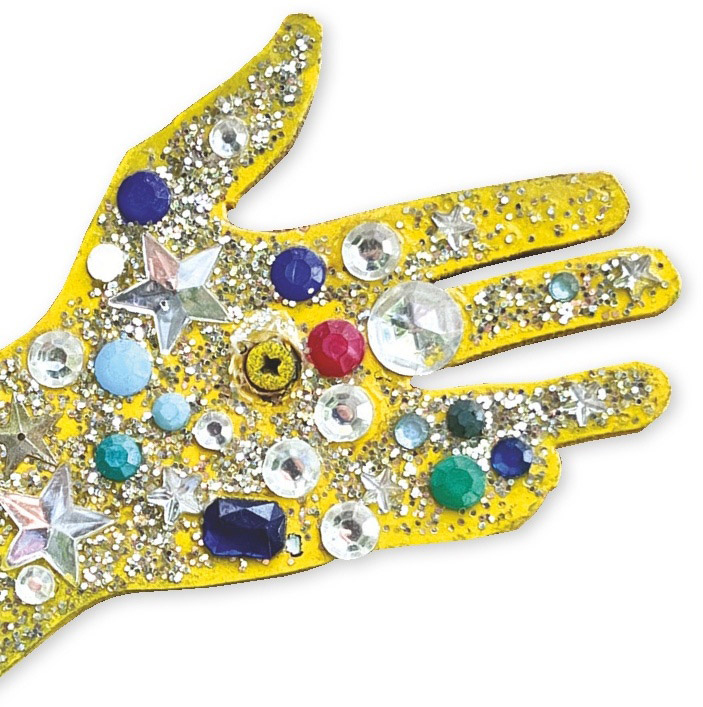 Now back to our show — The Art Goddess (Lynne), draped in floaty fabric, signals the start of each evening’s adventure as Art Boy (Amos) hurls through space and bursts through the Mystic Portal, stepping into the strange Never-Never world that now lies before him on Calhoun Street.

There below the rustic outdoor stage that serves as his studio/spaceship sits a crowd of connoisseurs of the absurd –– kids, adults, pet dogs alike –– on repurposed “magic carpets” (that once blanketed the backs of horses) or on a ragtag collection of vinyl-strapped folding lawn chairs and maybe even on an upturned bucket or two.

For the next hour, set against a Hummell-painted psychedelic backdrop vivid with swirls, stars, clouds, galaxies of glittery colored glass, and all kinds of stuff that looks as if it’s been conjured up on a particularly fruitful LSD trip, Art Boy has conversations with framed disembodied talking (and sometimes singing) heads. One night it may be Ben Franklin, Dorothy (fresh off the Yellow Brick Road) or Rod Serling (cue The Twilight Zone theme song) or, well, who knows? It’s always a surprise. Even the Wizard of Oz might weigh in with billows of “smoke” (courtesy of a volunteer crew member setting off a fire extinguisher through the portrait’s mouth.) Meanwhile Michele Roldán-Shaw might just pop in, playing an Indian flute.

Once-and-future Bluffton mayors Emmett McCracken (as Abraham Lincoln) and Lisa Sulka to Lowcountry “celebrities” like Richard Feldman (as Santa Claus), Tamela and Nick Maxim (as newlyweds) are among the folks who tread these uneven boards. Not to mention Robert Seven, the grand priest of the Church of the Pineapple, who rolls in from Asheville in his folk-art festooned Emerge-N-See van and speaks his own language — unintelligible to anyone else on Earth.

A brief pause for an author’s aside: It should be noted that’s there is no real script to Living Colors shows. Instead, scribbled notes with a lot of directional arrows outlining the evening’s plot complications are posted on the back of the Mystic Portal. In reality the notes are just a bunch of cues to keep the production more or less on track. Improv rules. In other words, whoever shows up on stage can take them as a suggestion for maneuvering their way through the thicket of ad libbed antics.

That being said, the plot always hinges on “The Problem”: Art Boy has “painted himself into a corner,” royally screwing up his latest artwork onstage. Not surprising, it’s always weird stuff that propels the action. One night, for example, he’s embarked on a painter’s nightmare. A customer has commissioned a portrait of his wife as a gift. Art Boy paints a Botticelli beauty. The customer reels back upon viewing it. “No! You’ve made her too pretty!” Perplexed, our hero returns to the proverbial drawing board. The next canvas? Uglier but still too flattering. What to do? What to do? While the “peanut gallery” below shouts out suggestions, the Art Goddess floats in, giving Art Boy a verbal boost with “Believe in yourself! You can do it!”

Music Interlude: Time to make more noise or maybe even music. Kids scramble up from the magic carpets to a section of the platform stage right and grab pots, pans, drums, maracas, kazoos and well, even (shudder) a saw blade. Bang. Bang. Plunk. Dah dah. Twang.

Back to the action. Our Lowcountry Leonardo is slapping more paint on the project at hand. He stands back and raises his arms in surrender or perhaps desperation. Cries arise from the audience. “The gong! The gong!” Aha, a light bulb goes off in Art Boy’s head. He picks up a mallet and gives the gong a whack, summoning Art Angel to the rescue! Well, sorta. The would-be boy hero (11-year-old Chandler as a reincarnated Hell’s Angel) comes barreling in, wings aflutter, on his miniature Harley to save the day. Inevitably he smashes into a wall. “Ooof,” die-hard fans and first-timer spectators alike grunt on cue. (Art Boy’s crash landing, it should be noted, is a staple of the Living Colors repertoire.)

Meanwhile, in a final stroke of genius or perhaps frustration, Art Boy changes the portrait into one of a pig. “You’ve nailed it,” the customer shouts. “I want my wife to see it.” The wife strides in. And, drum roll, it turns out that she herself has the head of a pig complete with snout. Alas, she is not amused at her artistic likeness. But the crowd clearly is! She stomps out, hubby in tow. 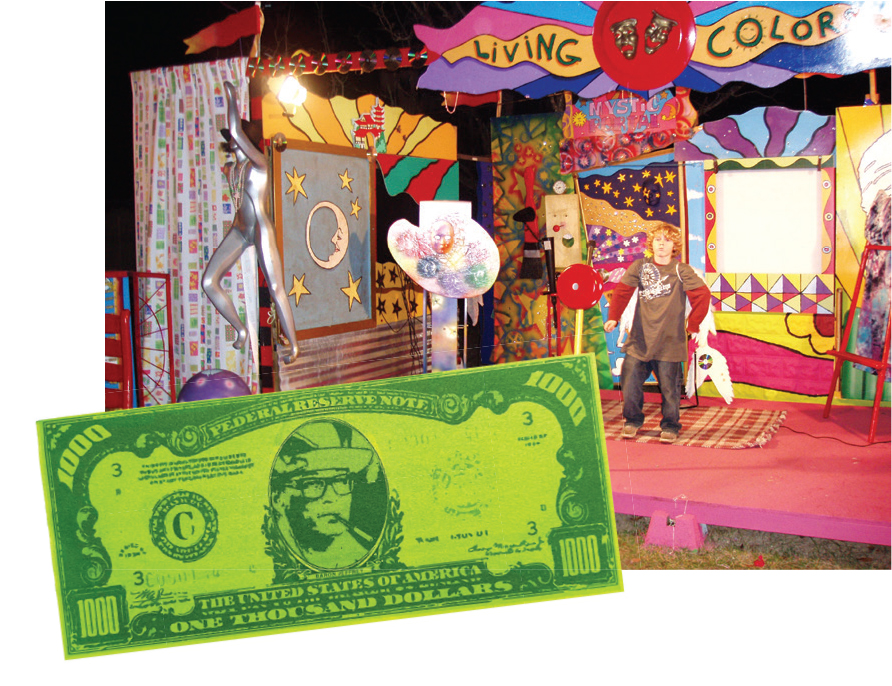 Ah, but suddenly the whoomph whoomph of helicopter blades fill the air. (Sound effects by Clark). Then the Mystic Portal swings open to reveal a savior who, as always, struts through the Magic Portal in all his “Lord Fauntleroy” glory, with dark-rimmed Ari Onassis glasses and blazer with a presumably aristocratic crest over its breast pocket. Ta da! It’s none other than the uber-rich Baron Jeffrey! (The moniker of a real-life transplanted New Yorker-turned-local “antiques” dealer.) The Baron takes one look at whatever failed project is on stage that night and proclaims, “Pure Genius! I’ll buy it!” With that he pulls out wads of “Baron Bucks” (that’s 1,000 dollar bills with his mug on them) and begins tossing the fluttering faux banknotes out over the stage and the outstretched arms of the audience.

A sale is made! In celebration Art Boy, Art Goddess, Art Angel, the Baron, and any other assorted characters who dare venture back on stage, jet silly string and fire cannons of confetti at the rowdy but happy crowd. Then Living Color’s studio, like a freewheeling Brigadoon or family-friendly Woodstock set amid the live oaks, fades away until the following Third Friday, only to vanish forever one starry night in June 2008. LL 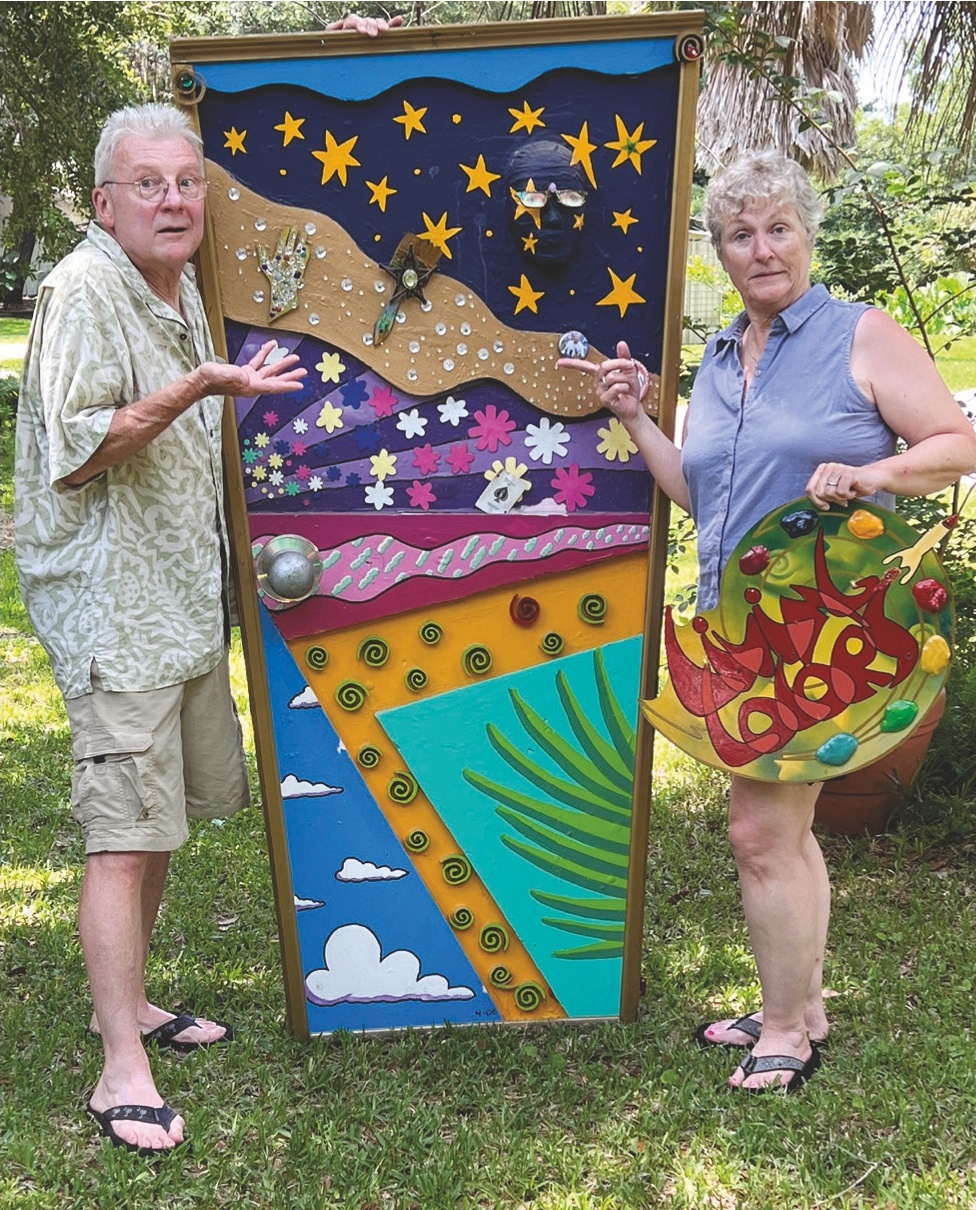 Q: What propelled you into staging these whimsical flights of fancy?
A: Little towns are art magnets. (That’s how Key West got developed after World War II.) The idea in Bluffton was to make an arts-centric district on Calhoun Street, which at that time was just a collection of small shops, no competition for the Tanger Outlets up on 278. The merchants would keep stores open late, and the event would be a glorified art walk with wine, cheese and boiled peanuts. I had my studio, a metal shed next to Eggs’n’tricities, and people would come in, point to my art and ask, “What’s the story behind this?” and I’d entertain them. So, I said to Lynnie, what if we build a stage and put on a show? Fact, was, however, I was clueless. I’d been in a play in junior high school but knew nothing about the theater. And Lynnie had been in love with her high school drama teacher. So much for experience.

Q: Any good casting stories?
A: Luanne La Roche introduced me to Baron Jeffrey, who was a connoisseur of thrift items he’d reclaimed and resold. He gave me some to use as props in the show. Then one day he and I were sitting in our cars stuck in traffic by the old fire department on Bridge and Burnt Church streets. I leaned out my window and said, “Hey, you wanna be in my show?”

He said, “Yes!” And I said, “Do you have any wardrobe?” He said, “Amos, have I got wardrobe!” And he showed for his part with the Onassis glasses, the Lord Fauntleroy blazer and the brim hat with the ribbon. Darling, this guy was real!

Q: And along with the eccentric characters and happenings, I hear the music was a big draw.
A: The idea was for the arts to create a nucleus inclusively for people, particularly the kids. We discovered by accident that the high school bands loved having this gig to themselves because all they ever seemed to play was school dances, fundraisers, parties. That was it. So this was their show. They got paid a little bit of money and had a tip jar. And they got other gigs from here, too.

Q: What happened?
A: We were gaining momentum, but we could see clouds on the horizon. We were self-funding this and knew we’d have to come up with money to keep it going. So I was told to apply for grants. The movers and shakers were starting to line up, and everything was going just great. And then, the bust. The recession. Third Friday died two months after we were gone. Now you couldn’t do what we were doing. We did it outside and it went late. We weren’t supposed to do that or be there. So we had our moment.