No need to get crabby over a Daufuskie Island secret.

Open wide and take a bite out of a perfectly prepared Daufuskie Island Deviled Crab cake. Savor the delicious delicacy that only is available beginning in late spring into summertime when the crabs are caught in the Lowcountry’s warm, brackish and high salinity ocean waters.

Enjoy every morsel, down to wiping the crab baking shell clean, because when it comes to getting the recipe, the Daufuskie Island cooks’ lips are sealed.

“I cannot give you a recipe on that one,” said Sallie Ann Robinson, when delicately asked how to make her version of the regional specialty. “It’s a family secret and from my understanding, deviled crab was started here and everyone who does it may have a little different recipe.”

Ingredients may vary — perhaps a special spice, or the type of breading (Ritz crackers?) — but the keepers of the recipes are all on the same page otherwise.

“If I tell you what’s in it, everyone would make it,” said Ernestine Smith. “It’s a recipe you grew up with, like a fried chicken recipe. The people have to decide what makes it different from the others.”

Smith, a fourth-generation Gullah, cooks at Old Daufuskie Crab Company. She’s been there for about 15 years, but has been the keeper of her family’s recipe much longer. She said the recipe has been passed down from her grandmother to her mother to her. Memories date back to childhood when she was first taught the tedious task of picking the crab meat out of the shell. Today, Smith prepares about six dozen crab cakes in the restaurant’s kitchen every other day during the season.

Robinson, a sixth-generation Gullah, tells a story that dates back in the ‘60s and ‘70s. She said her mother raised the family from the money she earned making and selling deviled crabs and baking them in a wood stove. After leaving home and finding her way back to Daufuskie, Robinson said people would ask her to make deviled crabs. “You make them like your momma,” she heard time and time again.

Robinson’s customers include locals, tourists and have expanded well beyond the Lowcountry boundaries, just by word of mouth. She either meets her customers with the delicacy, or they come by her house. Orders can be as large as five dozen, which was a recent request by a man who was transporting them up north. In this case, Robinson had to freeze the order, but keep the word “frozen” out of the equation.

Robison gets the crabs from various crabbers, but said as recreational crabbing has become more popular, crabs have gotten sparser. And then comes the picking of the white, dark and sweet claw meat. “It’s a job and you gotta have a love for it because it ain’t something you do for fun,” Robinson said. As for passing the recipe down to the next generation, Robinson’s oldest son, Jermaine, holds the keys to the vault.

“All others are different from ours,” Robinson said. “I tell folks, ‘If you had a recipe and made it, it still won’t come out the same way.’ I say, ‘Honey, that’s because you don’t hold your head right.’ ”

Ellie Mae Jenkins, born and raised on Daufuskie, also creates a popular version of the dish. She prepares them for family and friends with no advertising whatsoever, said her oldest son, Ricky Stevens.

Stevens said the recipe is in good hands for the future because his sisters have learned how to make deviled crab. When asked to compare variations of the dish, Stevens didn’t hesitate and said, “I only eat my mom’s crabs. People love my mom’s. Everyone’s got a different taste, but I love the way she makes them. It’s as simple as that.”

Although we couldn’t crack open how to prepare Daufuskie Island Deviled Crab, we didn’t want to leave you hungry. Here is a recipe to get you started. 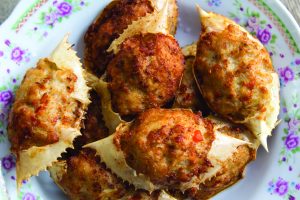 [1] Heat oven to 350 degrees. Mix all ingredients and stuff back into crab shells. [2] Season mixture with more Old Bay. Bake for 30 minutes. [3] Create a funny name and voice for your deviled crab before eating it. We like Shell-don.