It’s 2015. But here in this North Carolina recording studio, it feels like the old days of Motown circa 1967. Candace Woodson, headphones clamped over her ears, stands at the mic, ready to lay down tracks for a new song. Behind her the drummer starts a beat. Guitars and brass jump in. The engineer is bobbing his head in the booth, rocking to the rhythm, as the studio pulsates with sound and energy. Woodson is singing I’m free…” And she really means it.

Woodson had skirted many a big pothole in the road she’d taken to get to this moment. Any of them could have swallowed up a less intrepid soul. She’d grown up singing a cappella gospel music with her two older sisters as The Parks Girls in Paducah, Kentucky. She dazzled her high schoolmates, who dubbed her “Entertainer of the Year,” and earned the first commercial music degree ever given at Tennessee State University.

But there also had been her painful childhood with an abusive father from whom her mother and sisters had fled, promising recording contracts that didn’t pan out, divorce, the financial stress of being a single mother of two, working day jobs and singing nights to keep her career alive and her boys fed. And the blow of not making the cut when she auditioned for the reality TV competition show, The Voice.

But Candace Woodson was not one to tumble into an abyss. Instead, she has had an innate ability to stride right over each threat. And there were her two boys, Jared, who excelled in tennis and trained at Van Der Meer, and, Morgan or MoMo, who also was very skilled with a racquet. They made her heart sing.

The song “Free” had come out of an unexpected and exhilarating moment a few months earlier as she left MUSC Hollings Cancer Center. A year earlier when she’d first gotten her cancer diagnosis, her world had threatened to go spinning out of control. But along with the support of her sons and friends, she’d steadied herself with a mantra: “The cancer is on me, not in me.”
That attitude had propelled her through a mastectomy, reconstruction, medications and doctor visits while she worked as an administrative assistant at Hilton Head Prep and single parenthood. It gave her the resilience to perform at the wedding of John Mellencamp’s daughter, Justice, a mere twenty-eight days after she’d gotten off the surgeon’s table. Meanwhile she’d put her first love, performing R & B, Motown, and classic rock as Candace Woodson and the Domino Theory Band at music venues around Hilton Head and Savannah, on hold.

But suddenly on that fateful day as she left MUSC, after her oncologist pronounced her cancer-free, she realized that despite her can-do attitude, all those months she’d been caught in a vise of fear. Now it had lost its grip. The words and music of “Free” began forming in her head as she drove home along U.S. 17 from Charleston. 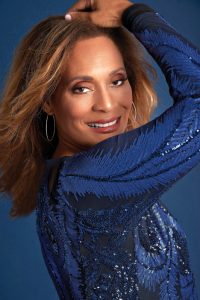 “Free” scored a hit across the Atlantic, thanks to a producer she’d met at that ill-fated Voice audition. Seeing the song’s potential, he’d sent it off to a British promoter who remixed it as a lively dance tune. Soon deejays were giving “Free” air time on radio and spinning it in clubs. Her next recording, “The Answer is No,” spoke to the power of giving a resounding “no” to situations that could bring you down. It soared to the top spot on the U.K. Soul Chart. And Woodson was on her way to becoming The Queen of Sophisticated Soul.

“But,” she says, “I knew I didn’t want to be a performer who just made singles. I was determined to make an album.” Her resolve paid off. Expansion Records signed her on to make the album, Desire, which included remixes of several singles recorded in those North Carolina studio sessions. The singer-composer won a 2019 Indie Soul Grammy for the album. Then in January 2020 she flew to London to pick up the Best International Artist Bright Star Award.

It was a heady moment. Along with all the kudos, she’d been back performing, this time as Candace Woodson and the CW All Stars. Then the pandemic hit. And the world as we knew it hit the pause button.

“So what do I do now?” she asked herself. “I can’t perform anymore. We can’t go clubbing. Can I record? Will they let me in the studio?” She needed to keep the momentum going. “That’s when my inspiration for ‘Midas Touch’ came. I asked myself, what did I do on stage that got the crowd hyped?”

To see Candace Woodson live is to be drawn into her force field. Her smooth vocals enrapture, and her style exudes the old-time glamour of Lena Horne. She has engaging banter about football, baseball (her cousin, Mookie Betts, plays for the LA Dodgers), world events, and the music, always the music, pulling you in, making you want to move your feet, clap and wave your hands in the air, and shake your groove.

So she invited her listeners to a virtual party.

“‘Midas Touch Ooh Ooh’ set a record in the U.K.,” Woodson exclaims. “It’s been on top of the charts for twelve weeks.” Aside from the original recording, this irresistible tune has had two other incarnations: a disco and a USA Steppers mix. Recently “Midas” took the top people’s choice prize for six weeks on John Leech’s popular BBC radio show. “I even beat out Diana Ross!”
This August she went to Atlanta to pick up a Radio and Record Award for her U.K. success. 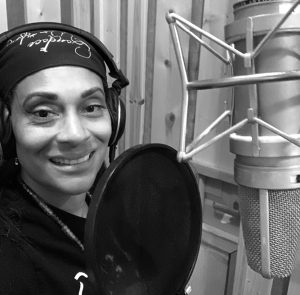 Now with Jared, now 25 and a tennis pro in New York, and MoMo, now 15 and on track to turn pro as well, she’s exploring ways to expand her reach across the U.S. More airplay on terrestrial radio stations, she knows, would lead to charting on Billboard here.

Meanwhile, one of the ways she centers herself through career and life challenges is by practicing yoga. She also meditates, reads spiritual books and walks the beach and trails near Lawton Stables in Sea Pines. When asked if she listens to music or podcasts on her walks, she answers, “No. I like the quiet and let whatever is going to happen in my mind happen.”

She recently posted on YouTube the song, “Don’t Give Up.” One could say the title embodies her motto. “I’ve been told I was too old, my music was too slow, I didn’t have the money so they weren’t going to pay attention to me, major backing is not going to happen.” She rattles off the discouraging comments that the music industry has flung her way. Then she punctuates it all with an exuberant laugh. Lucky for us, as she tells us in her lyrics, she hasn’t bought into any of those negatives.

A Simple Walk in the Park
When days were dark.
Spending time alone with myself
A world that’s full of pain
We’ve been brought to shame
And the loss of loved ones heaven has gained
But loving you has made me see
It’s the power of love that’s what we need
Life’s a merry-go-round take you through ups and downs
Whatever you do, whatever you do, don’t give up

And you can bet she never will.