Musician Darius Rucker was born and raised in Charleston by his mother, educated at the University of South Carolina, and currently lives in his hometown with his wife, Beth, and three children.

The 51-year-old is a pedigreed South Carolinian and proud of it.

Since forming Hootie & the Blowfish with some school buddies at USC in the mid-1980s, the group recorded five studio albums and have sold more than 26 million records. The band’s debut album became the 14th biggest selling album of all time in the United States, charting four singles in the top 14. Even though the band doesn’t tour or record music anymore, it still performs several charity concerts every year.

In 2002, Ruckus recorded an R&B album before moving into country music in 2008. Since his starburst beginning in the country world, he has released five albums and a shelf full of No. 1 hits.

He’ll be heading to Hilton Head — a place he said he’s “always loved” — in a few weeks to host his seventh annual Darius Rucker Intercollegiate golf tournament at Long Cove Club (March 2-4) before embarking on a 30-date “Summer Plays On” tour as co-headliner with Lady Antebellum. Then he’ll continue on tour as a solo with his band, with stops in Europe and Australia. He’ll be back home in November.

LOCAL Life caught up with Rucker on the phone, when he was walking his two dogs in his front yard. Yet, he still had time to chat. Here are some excerpts from the talk:

At the age of 20 and as a sophomore at USC in 1986, you and your bandmates founded Hootie & the Blowfish. What were your musical expectations for the band? [Darius Rucker] “Oh, in the beginning, it was to play together and meet some girls. We all wanted to be musicians, but at that age, in college, you were thinking about something else that you needed to cover (for him, it was majoring in broadcast journalism).”

The band released its debut album “Cracked Rear View” in 1994 and it sold 16 million copies. Why do you think the album was so successful and where did you think the band was going? [DR] “I’d like to tell you it was a great record, but we were in the right place at the right time. We were just a bunch of kids from South Carolina who had just gotten a record deal and we were lucky, and we just wanted to play music. We didn’t really think about being big or anything. We were just happy the shows were getting big and we were playing bigger rooms, like the (Madison Square) Garden.” 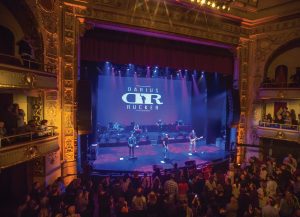 Hootie released five studio albums and then you went solo for one R&B in 2002. Why solo? [DR] “We just wanted to take a break at that point. I’m into all kinds of music and was influenced by everybody from Kenny Rogers, Frank Sinatra and Al Green. It was always something I wanted to do. My label (Hidden Beach Recordings) let me do it, and it was a lot of fun.”

In 2008 you announced you were going country and your first album, “Learn to Live,” produced three No. 1 singles. Since then, you’ve released four more country albums, the latest in October. You have landed eight No.1 hit country singles overall. What’s going on here with your passion and success in country music? [DR] “Ever since I heard this guy Roy Foster back in the day, I wondered. Then I finally got to do it. I’d be lying to you if I expected to have three No. 1 songs off the first record. My label (Capitol Nashville Records) was incredible, and the music resonated I think. Once it happened, the sky was the limit after that.”

Of all the accolades that have come your way – Grand Ole Opry induction, Grammys, singing the national anthem at major events – which one is the most meaningful? [DR] “Playing the show at the Apollo (Theater in Harlem, N.Y., on Oct. 19) and being a member of the Grand Ole Opry for me are tied No. 1. I don’t think there had ever been a country act there before at the Apollo. It was a sellout, and a great moment in my career.”

Who is Darius Rucker the man, son, brother, husband and father? [DR] “Whoa! Being a dad, that’s the most important thing to me. … I like to think I’m helping people and doing good things for peoples’ lives. Just making people happy for a second. My mom always said, ‘Even if you don’t have much, you can always help someone who is less fortunate.'”

At age 51, are you happy? Content? Still searching? [DR] “I’m happy. I’ve learned that life is what it is, and that you only live this life once. Professionally, I’ve done pretty much everything I’ve wanted to do. So now it’s about raising my kids, watching over their lives and trying to be the best dad I can be.”

What does being a South Carolina man through and through, born, raised and living here, mean to you? [DR] “It means everything to me, that’s why I still live here. I can live anywhere else I want. I’ve worked hard enough and financially enough to live anywhere. I live in Charleston, because it’s my favorite place in the world. Being in this community has made me who I am.”

What is your connection to Hilton Head Island? [DR] “I’ve had so many great times there, and so many great friends. Hilton Head has always been part of my career, back playing at the Old Post Office in the late ‘80s and early ‘90s. We actually played the very last show there. During the summer, we used to play in Hilton Head every four weeks or so. You knew it was going to be a great show and a sellout.”

Rock/country artist Darius Rucker has been playing golf his entire life. The 6.5 handicapper loves the sport and loves sharing his passion for it with others.

After one of the annual Hootie & the Blowfish Monday After the Masters Celebrity Pro-Am golf tournaments in Myrtle Beach ended eight or so years ago, he was approached about hosting a local golf tournament on Hilton Head for female collegians. Why not? His tournament, which he will host for the 24th time this spring, is highly successful and funds raised benefit children’s educational opportunities and junior golf programs in the Palmetto State.

Here are some of Rucker’s thoughts about hosting the Darius Rucker Intercollegiate golf tournament:

“If we were going to do that tournament, the best place would be Hilton Head,” he said. “When we contacted Long Cove, which has one of the best golf courses in the country, they said ‘Yes, we would love to host,’ and for us it was a no-brainer, so we ran with it. It’s amazing to me how big it’s gotten. When I go around the country, everyone asks me, ‘Can I come?’” It’s becoming one of the top golf tournaments in the country. A lot of people talk about how much they love the concert. How many tournaments do they go to where they can see a concert? I think I’ve turned so many lady golfers into country fans.”

What: Women’s 54-hole Darius Rucker Intercollegiate golf tournament
Where: Pete Dye course at Long Cove Club, Hilton Head Island
When: March 2-4
Admission: Free for spectators
Contact: Visit www.longcoveclub.com or call Bob Patton at
843-686-1020 or at [email protected]
Kick-off concert: Rucker will perform at a private concert at the
Arts Center of Coastal Carolina the night before the practice round
for players, coaches, sponsors and Long Cove Club residents. It is not open to the general public.