Henry Cho didn’t struggle to become a comedian. He got a job after appearing just once on stage. Thirty years later, the 56-year-old hasn’t stopped since.

Today, his comedy can be heard nationwide several times weekly on XM Radio’s Channel 151, Laugh USA, Sirius Radio’s Blue Collar Radio Channel 103, and Pandora Radio’s PG Comedy Radio Channel. He appears regularly at the Grand Ole Opry and appeared on several television shows and in films, including “Revenge of the Nerds,” “McHale’s Navy,” “Say It Isn’t So” and “Material Girls.”

He and his wife and three children live in his home state of Tennessee. He’s touring constantly.

“We’re delighted he’s back,” said Andrea Gannon, marketing director for the Arts Center or Coastal Carolina. “He appeared a couple of years ago and he immediately sold out. We know our audiences will love him.”

[LOCAL Life] Why comedy?
[Henry Cho] When I was in college I wanted to try standup comedy so on a whim I signed up for a comedy competition at the local comedy club. I’d never set foot in the place beforehand. It ended up being a major competition with working comedians so I told my pals that I was going to go up and try not to bomb too badly and then I’d never talk about doing comedy again. Fortunately, I did great, got a standing ovation and I won the competition that night. The owner of the Funny Bone Comedy Club chain happened to be there. He hired me on the spot that Monday night. I started working as the emcee that Wednesday and I dropped out of college on Friday. That was over 33 years ago.

[LL] What topics do you avoid in your comedy and why? [HC] I don’t talk a lot about politics and religion because I figured why split my crowd if I don’t have to. I’m also very clean, so there’s no vulgarity or foul language in my act. I fancy myself as a man of faith so I try to reflect that in everything I do.

[LL] What is it about the South you like so much? [HC] Nice people and a better moral compass than Los Angeles.

Henry Cho at the Arts Center of Coastal Carolina

[LL] Have you had a chance to spend some time on Hilton Head? [HC] I played in the Hilton Head Island Celebrity Classic Golf Tournament for about 15-20 straight years so I’m very familiar with the island. My pal’s dad used to rent a place in Sea Pines back in the late ‘70s so that was the first time I came to Hilton Head. My college girlfriend had two summer internships at the hospital in the ‘80s
so I spent almost two straight summers here back in those days.

[LL] Tell us about your family life. How do you keep it real? [HC] We moved from LA years ago once my oldest started kindergarten. I adjusted my priorities once the kids started school. I try to keep it faith, family then fame so we raised our kids in Tennessee to try to keep it as real as possible. I missed out on a lot of business situations by leaving Hollywood but I think it’s more important for my kids to be in a grounded environment than for me to be in TV all the time like I used to be. We live in the Nashville area, still a showbiz kinda town but on a much lower key, so it’s been a great fit for our family.

• TV credits include appearances on NBC’s The Tonight Show, CBS’s The Late, Late, Show, and NBC’s Young Comedians Special. He served two years as host of NBC’s Friday Night Videos and had many guest roles on various network sitcoms.

• Co-creator, co-producer and co-writer of “The Henry Cho Show” on GAC. 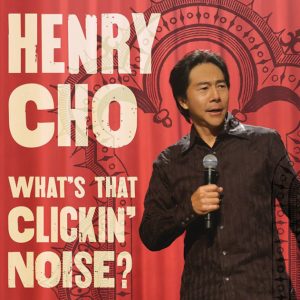 • Can be heard daily on Sirrus XM, Blue Collar Radio and Pandora.

• A regular performer at the Grand Ole Opry.

• Film credits include Universal’s McHale’s Navy with Tom Arnold and David Allen Greer; Say It Isn’t So with Heather Graham and Sally Field; and Material Girls with Hilary Duff and Angelica Houston produced by Madonna.

• Filmed the Faith-based Indy film “Saving Faith” in which he co-starred and co-produced.

• Nominated for Best Supporting Actor in a Feature Film by the International Christian Film Festival.

[LL] Would you encourage your sons or daughter to pursue a career in entertainment? [HC] I encourage them to do whatever they want to pursue. We have a room full of different musical instruments and my kids can play many different ones. My wife told me years ago that they can grow up and have ‘normal jobs’ too and I said, “I know that, but why would you if you don’t have to?” My daughter had her first scene a couple weeks ago. I did a low budget Hallmark movie and part of my deal was that she had the opportunity to play ‘teenager #1″. She did great, nailed it and got a taste of how it all works. She was an extra in another faith-based film I did three years ago, but this was a much bigger deal.

[LL] What question do you wish I had asked? [HC] I’m not sure, those are all great questions. I guess what do I have planned in the future? I’m supposed to shoot another standup special towards the end of the year but not confirmed yet. I’m shooting a television pilot (more like a presentation as the producers don’t have a network attached yet) in July. Once my next oldest son graduates high school in two years, I’m going to be super mobile and will able to pursue projects I had to turn down over the past 10-14 years.