The next Olympics? Molly Solomon has it covered, literally

Molly Solomon stands out in the world of sports for several reasons. First, she’s been with the NBCUniversal for 30 years, a rare tenure in any industry. Second, she was the first woman in charge of a national sports network and now she’s in charge of two. Third, not sports related but distinctive, she is the mother of triplets. Solomon, 52, her husband, Geoff Russell, and their three children split their time between Orlando and their home in Colleton River Club. She recently told LOCAL Life about her career and her love of the Lowcountry.

[LOCAL LIFE] You graduated magna cum laude from Georgetown University’s School of Foreign Service in 1990, with a B.S. in international politics. How did you go from that to sports? [Molly Solomon] I always wanted to work in sports journalism in some capacity since I was a teen. I chose to attend Georgetown University’s School of Foreign Service because I had gone to high school overseas and was intrigued by all that GU offered academically. It was very much an international university. I worked sports internships on weekends and during the summer and was able to build up a pretty robust resume for a college kid. After my senior year, I cold called NBC Sports, found a way to get my resume to the right person and ended up with a job as an Olympic Researcher for the 1992 Olympics. I’ve now been with the company for nearly 30 years.

[LL] What is the number one rule for doing live TV? [MS] Be flexible and work in the moment. Production teams head into every event with a plan, but you have to be ready for the storyline to change and move with it.

[LL] What is one lesson from early in your career that you have carried with you ever since? For example, I learned early on to take notes in pencil because ink runs if your notebook gets wet. [MS] You have to rebound from mistakes and disappointment quickly! In the course of a live telecast, not every decision works out. You have to move forward and continue without kicking yourself for a technical glitch or production mistake. It’s a great life lesson: to continue to move forward. Life isn’t perfect; it’s a process. 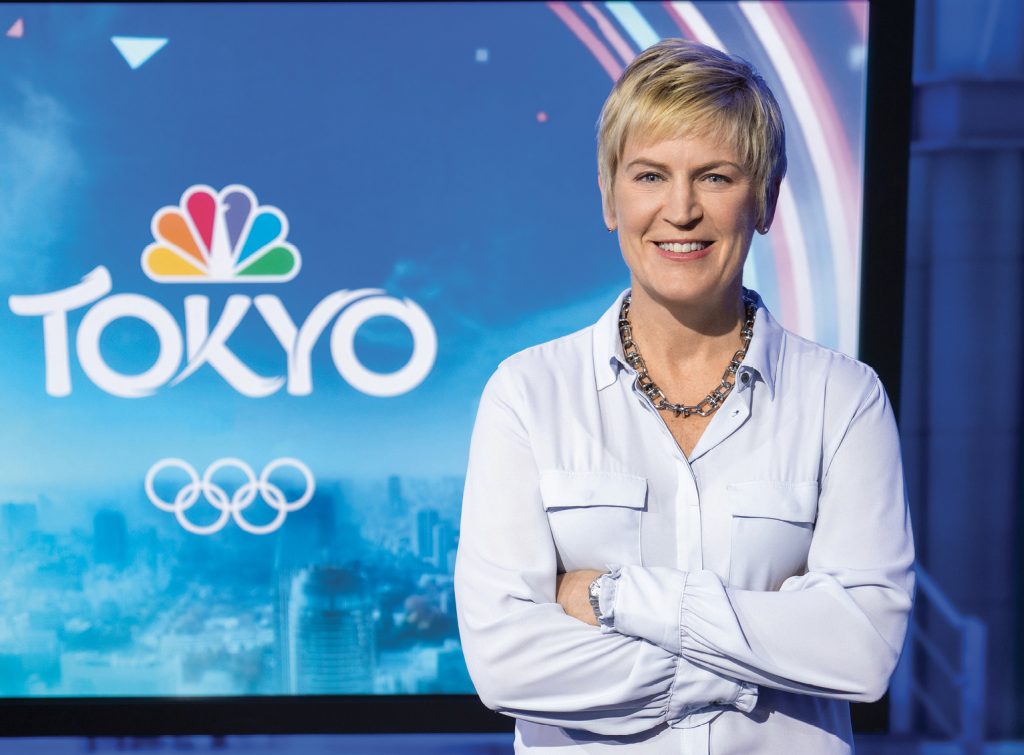 [LL] It’s certainly conjecture at this point, but what lasting effect of the pandemic do you see in sports? [MS] We are just beginning to plan for the reinstatement of sports. There are so many questions about crowds returning and how to keep players and our production teams safe. I think the public will be patient as the sports world plans the move forward. Television productions involve huge personnel and technical footprints, and now we are planning for fewer people in order to keep everyone safe.

[LL] What was the biggest surprise of having to halt planning for this summer’s Olympics? [MS] When the Olympics were postponed, the pandemic was continuing to rise worldwide. We believe the postponement will build anticipation for the first global gathering since the world shutdown. The Olympic flame can provide the light at the end of this very dark tunnel.

[LL] The Golf Channel continues to set viewership records. Why do you think that is? [MS] Golf Channel is celebrating its 25th anniversary this year. Our co-founder Arnold Palmer realized the potential for a 24/7 single sports network, the first of its kind. When you look back at this prescient endeavor, it inspired the television sports landscape that “super serves” fans with a plethora of sport-specific offerings like NFL Network, Tennis Channel, NBATV and MLB Network.

[LL] Tennis is considering tournaments that include both genders. Do you see that happening in golf? [MS] Mixed gender events are taking hold in many different sports. We’ll see men and women competing together next year in the Tokyo Olympics in swimming and track relay events. Several mixed gender events were planned in professional golf as well this year, but unfortunately were postponed or cancelled. I hope it’s a trend for the sport.

[LL] You could have chosen anywhere for a second home. Why Hilton Head? [MS] We love the Lowcountry vibe, from the marsh views to the live oak canopies. Our family travels to South Carolina from Florida several times a year. Each time, we find an intriguing new restaurant on the Island or on the main street in Bluffton. The golf was particularly a strong draw. We are pretty fanatical golfers, and we quickly realized how fun yet challenging the Nicklaus and Dye layouts were at Colleton River. To have two completely different kinds of layouts as your home course is incredibly satisfying. We are blessed.

[LL] How did you discover Colleton River? [MS] My husband visited Colleton River when it first opened in the early 1990s and fell in love with the area and, of course, the golf. Sixteen years ago, he brought me to his “favorite place” and we bought a lot. Six years later, we traded in the lot for a house and we live(d) happily ever after.

[LL] Which course is your favorite? [MS] I like the diversity of the Dye and Nicklaus courses, but if you forced me to choose — I prefer the Nick. We have some great family memories of sneaking out onto the 2nd hole behind our backyard and playing “barefoot” golf with 10 people, walking and carrying their clubs. The music is blaring, the solo cups are filled and our hearts are brimming. South Carolina represents great times and happy family memories for us, Fourth of July and Thanksgiving with the rooms overflowing with relatives and friends.

What’s she in charge of regarding Olympic coverage? All of it, from Opening Ceremony, to athletic profiles to live sports coverage to Closing Ceremony.

Number of Olympics she has helped produce for NBC Sports: 10

Local connection: She and her family have a home in Colleton River Club