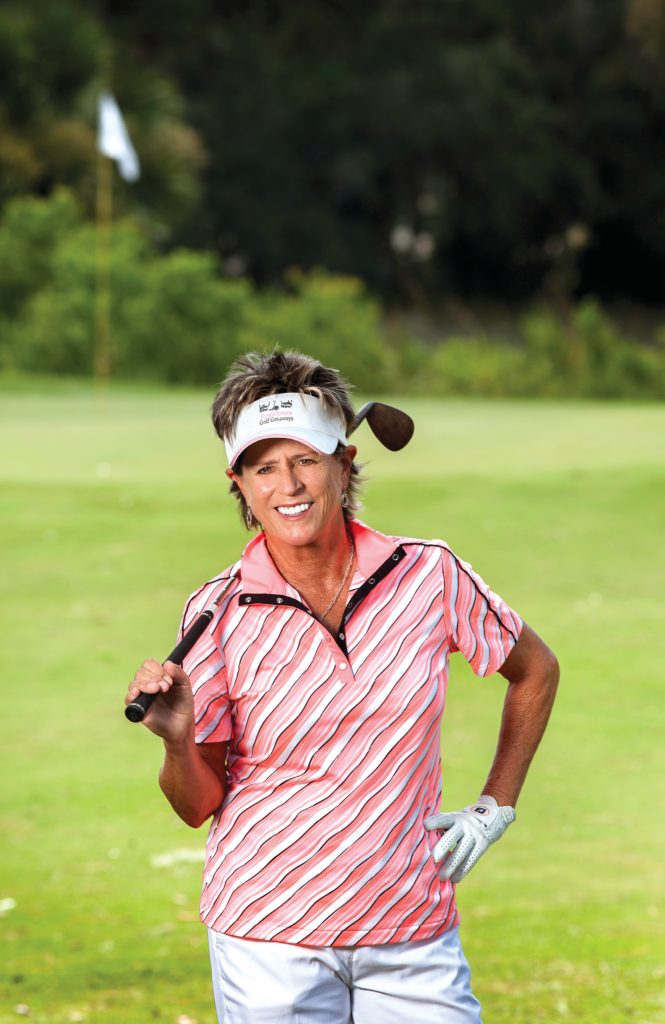 If you happen to see Rosie Jones playing on one of the many courses in the Lowcountry, take notes. With 13 LPGA victories under her belt, she continues to rack up wins on the Legends Tour when she’s not honing her game in and around her Moss Creek home. We caught up with Jones to talk about the rising profile of women’s golf and what brought her to the Lowcountry.

[Local Life] What has it been like as a female golfer seeing women’s golf receive growing visibility over the past few decades?

[Rosie Jones] We fought long and hard for that, for more TV exposure and more commentators. Women get really good coverage now, and in fact, there are only a few tournaments that aren’t on TV. In the early ’90s and ’80s, it was hit or miss. A lot of tournaments weren’t even televised. TV gives you what you want. A lot more people know the players and that brings a much bigger fanbase.

How has the game changed since then? [RJ] There’s a lot more interaction and a lot more eyeballs. We weren’t texting or tweeting or on Facebook talking to fans. People really want to know you now and know your inside story. Social media resources give you that now.

Your partner, Carrie, caddies for you from time to time. What’s that dynamic like? [RJ] When she caddies for me, that’s the only time I get to be the boss (laughs). She’s like my steady right hand. She always listens and supports me. Yeah, sometimes you have heated words with a caddy or someone you want to blame for a bad shot. She knows it’s part of the game. We’re a really good team. She just wants to make it so I can play at my best.

When you retired following the 2006 Women’s Open, you famously took off your visor, shoes and gloves and left them there. [RJ] I actually copied that after a famous Olympic wrestler. When he was done, he took off his headgear and boots and left them on the mat. I always thought, when I retire I’m going to do that. I was dealing with some injuries in my neck and even though I’d played well that year and several years before, I just felt like it was time to retire. It was my way of giving homage to my years on the tour.

Drill down that short game The short game is really the most important part of the game, especially in the Hilton Head area with this Bermuda grass where it’s hard to get up and down. I was never really a long-ball hitter, probably 240 (yards) at the longest, so I knew I was not going to hit a lot of greens.

Get a routine With putting, you need to have a good rhythm. It’s important to have a pre-shot routine. By the time you walk up to putt and take the practice stroke, all these things you do are in preparation to hit the putt. When you do those exactly the same way, you establish rhythm. That helps with consistency when you’re under pressure and your nerves start to build up a little.

Any idea where they are now? Did some museum snap them up? [RJ] (laughs) I don’t know what happened to that stuff.

How is the experience different on the Legends Tour? [RJ] We only play, on average, once a month. We’re a lot more relaxed, but we’re still very competitive. When the bell rings, we’re all in it for the win. At any age in golf you can be competitive. As long as I feel like I’m strong enough to compete, it gives me an outlet to put myself out there on the line.

You played in the inaugural U.S. Senior Women’s Open. What does it mean to have an event like that for women’s golf? [RJ] We’ve been really trying to encourage the USGA to give senior women a national title to play for. They already have a Senior Open for the men, so Senior Women’s Open was a no-brainer. The USGA knew that it was 10 years later than they should have had it. They really set the course up right to let us out there and score. And there were a lot more people in the gallery than anyone thought there would be. For us players, it was so cool to get back into a USGA event and have a U.S. Open title. Just to be involved with that week was so cool.

What drew you to Moss Creek? [RJ] I bought in Hilton Head Plantation back in 1985, but by 1990 I was on tour and it was really hard to travel in and out of Hilton Head, so I moved to Atlanta. When Carrie and I got together, I started looking at retirement. I wanted Hilton Head, but I didn’t know if Carrie would like it so we bought a small condo in Moss Creek we used for long weekends about 6-7 times a year for about 5-6 years. And every time we got back to Atlanta, we thought, “Why are we dealing with all this traffic and crime?”

I just knew I wanted to live here someday. And then I did.

Rosie Jones by the numbers