The reality TV star and former LOCAL Life intern shares her favorite memories from life on Hilton Head and her experiences on ABC’s ‘The Bachelor.’

Before Serena Pitt decided Matt James was “not her person” on the reality TV show “The Bachelor,” she bravely left her suburban life in Toronto to spend four months on Hilton Head Island, volunteering as an intern for
LOCAL Life magazine. She brought her friend, Brigitte, along for the adventure, and the two young Canadians made the most of their time in the Lowcountry — exploring our beaches and soaking up as many sunsets as possible.

Serena convinced Brigitte to come along with the promise of possibly bumping into Tyler Crispen and Angela Rummans, two contestants from the reality TV show “Big Brother” who had recently relocated to the island. In typical six-degrees-of-Lowcountry fashion, Serena and Brigitte drew the assignment of interviewing the reality stars for LOCAL Life’s February 2020 issue.

After the volunteer internship ended, Serena returned to school before her mother and sister convinced her to apply for the 25th season of “The Bachelor.” Now that the show is over (she stepped away in week 8), LOCAL Life’s Anna Lee Hoffman contacted her to discuss her experience on the show and her memories of island life.

[LOCAL Life] What are some of your favorite memories from living on Hilton Head? [Serena Pitt] The beach and the sunsets, 100 percent. Those are the things I miss the most. We have beaches in Toronto, but they’re not the same. The beaches on Hilton Head are stunningly beautiful, so we made time especially in November and December to book it and catch the sunset. It was so, so pretty and we loved it.

[LL] What was your biggest takeaway from the intern experience? [SP] I think that because I didn’t go into a full-time job in my industry and in my city, it really opened up my mind to take more risks in life. I did end up going back to school and getting back on track, but taking those four months to go away and do something different and unique taught me to get outside of my comfort zone and take opportunities that I may never get again. The advice that I would give to others and to myself is “Just do it.” There were definitely hard days when I would just think, “What are my next three years going to look like?” and because I’m such a planner, I would worry, “Am I putting myself at a disadvantage by coming here?” but I don’t look back on the experience and feel like I’m behind anyone. No regrets. 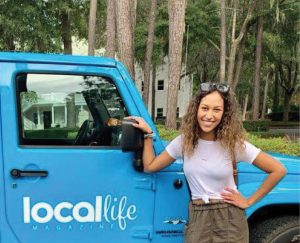 [LL] What was it like meeting fellow reality TV stars Tyler Crispen and Angela Rummans before you were on a reality TV show yourself? [SP] That was a really cool experience. Brigitte was a really big “Big Brother” fan. I had only watched a few of the seasons, but I knew who they were because my sister was a big fan. We ended up going back and watching a decent amount of their season when we were given the opportunity to interview them. It was definitely a highlight, and it was really cool to be able to put that on my resume and to say that we conducted that interview. That was like our baby, that project. We were working on that after hours, like non-stop because we were so excited about it, just being reality TV show fans. They were so nice, so easy-going and were great to work with.

[LL] What caused you to eventually apply to be a contestant on The Bachelor? [SP] I have always been a fan of the show. I’ve watched it for years, but never had any intentions of going on the show. I think the game-changer for me was the announcement that Matt was the bachelor. I was interested in meeting him. He was someone who I actually thought I would hit it off with. When ABC announced it, my mom and sister were like, “You need to apply, you need to apply!” They basically hounded me for a month and a half before I finally did it. After applying, I completely forgot about it and never thought that I would hear back, but then they left a few voicemails pretty quickly. I started the interview process, and the ball just kind of kept rolling from there.

[LL] What were the best/worst things about the show? [SP] I think the best thing was just the relationships, across the board. I made amazing relationships with the crew, and I made amazing friendships that are still some of my closest friendships to date with the other women. Honestly, as much as it didn’t work out with Matt, I still am grateful for the relationship. I truly believe you learn something about yourself in every relationship you’re in, whether it works out or not. The worst part … filming was definitely stressful, don’t get me wrong, there were definitely some tough days and some low points, for sure. As you can imagine, one guy and many women is not normal or ideal. But I think for me, having to watch it back was the most stressful. I got more comfortable as the season went on, but I did not like having to watch myself on television and not know what was going to be shown, and then just having to relive it. My friends and family — my closest circle — really had no idea what happened. Everyone in my life was wondering, “what’s going on? Are you engaged?,” and I just had to hold in that it doesn’t work out. Not being able to talk about it, and just having to relive it with everyone for the first time was the worst part. My friends were pretty respectful about not harassing me when it aired, but the way my journey ended was a little bit different than usual, so it was kind of a relief after everyone knew and I could finally talk to them about it.

[LL] What are you up to these days? [SP] I think my life in the past two years since my time on Hilton Head has definitely taken a big turn. I’m not where I thought I would be if you asked me a year ago. Before “The Bachelor” I had been working for a PR Agency and finishing my post-grad program in event marketing. That was the direction that I was going in life prior to the show. After the show, I just decided to take a second for myself and started exploring other opportunities. It was a really crazy eight months and year, so I have goals and things in mind that I’m going to be pursuing, but for now, I’m also just taking care of my own health and wellness.