In between walking her dog Twinkle, a dog wash, a salon appointment, and a meeting with her stage designer and musical director on a play she and her husband, Martin Bergman, are writing and producing, LOCAL Life spent some time talking with Rita Rudner, the legendary comedienne from her Laguna, Calif., home.

Throughout more than three decades of creative outpouring, the Florida native has performed countless stand-up comedy routines, starred in cable television specials, appeared on late night talk shows including the “Tonight Show” with Johnny Carson, anchored a lengthy record-setting residency in Las Vegas (for 13 years without ever gambling) where they also have a home, headlined cruises, authored five books, and written and performed in musicals. She’s also mom to their daughter, Molly, 16.

Rudner, who moved to New York City at the age of 15 and spent 10 years as a Broadway dancer, will be at the Arts Center of Coastal Carolina on Feb. 18 performing two shows. She’s headlinied corporate events before on the island. Here are excerpts from the interview:

[Local Life] Let’s talk a little bit more about your dog. [Rita Rudner] I have a very strange dog, which I didn’t think existed … a Chinese crested powderpuff. She’s the dog with no hair. I wanted to name her Barbara, because I think that would be a good name for a dog— ‘here Barbara’ — but my daughter said, ‘No mommy, it’s my dog,’ so it’s Twinkle. I don’t want her to talk too much about me in therapy.

When did you first know you were funny and who was your audience when you realized it? [RR] I never realized it; I always worked at being funny. The first time an audience laughed, I guess I knew I had a joke. I always depend on my audience to tell me if I’m funny.

Does your daughter think you’re funny? [RR] No, in a word. She thinks I’m a tiger mom, and I’m too tough on her. And I should just be her friend and laugh at her when she makes some terrible mistakes, when some grades come in that aren’t appropriate.

Is your husband your sounding board for your material? [RR] No, he won’t tolerate that. I don’t have any sounding boards except for my audience. When I was first starting out, I used to send jokes to my friends on their answering machines, but now I’m confident enough where if I say it in front of an audience and they don’t laugh, I move on.

Why did you transition from dancer to comedian, and who were your peers at that time? [RR] Because I noticed there weren’t too many female comedians. Joan Rivers and Phyllis Diller were the only two women I was aware of who were doing comedy. I knew they were funny, but they had a very specific aggressive style, and I figured I would change. I liked Jack Benny and Woody Allen, and I figured I could be a woman who could do a more subtle style of comedy.

Since the early ‘80s you have consistently performed one-night stands, cable specials, on late-night talk shows, a Vegas residency, written films and authored books. What’s your favorite way to express yourself? [RR] Stand-up comedy. Nothing compares. It’s immediate gratification. The audience is happy, and I’m happy. When you do a movie, you wait a year before it comes out…With comedy, I like taking my life in my own hands. I get to wear what I want, say what I want and just be who I am.

Your web site describes your comic style as “epigrammatic.” What does that mean? [RR] I don’t know. Tell me again what it says: ‘epigrammatic.’ I don’t know what that means. I’ll have to get in touch with whoever wrote that. (She turns around and asks her husband who’s in the room what the word means). I guess maybe it means concise. Martin went to school, and I didn’t. Look at how smart he is; I guess that’s why I married him.

What makes you funny and a crowd pleaser? Where did the Rita Rudner on stage come from? [RR] The most important thing for a person is to be honest when they’re on stage. The audience will sense if you’re not doing something that’s really true to you.

Of all the colleagues and celebrities you’ve met through the years, who’s the funniest and most inspiring? Do you ever steal ideas from them? [RR] No, I never steal anything. I used to love David Letterman and his quirky style and the way he was understated and overstated at the same time. I was just starting out in New York when he was just starting out in New York. When I came home, my doorman said, ‘I saw you on Letterman, when are you on again?’ I thought, ‘Oh my gosh, I have to write more material.’

Is there an end goal in your life or are you just riding your creative wave forever?
[RR] I just want to be a good mother; that’s what I’m working on now.

You’re performing two shows next month at the Arts Center of Coastal Carolina. Do you know what kind of audience you can expect at 5 and 8 p.m.? [RR] Well dressed.

Which audience has given you the most chills of appreciation and applause? Carnegie Hall, Vegas, a certain comedy club? [RR] Well, I feed off of every audience. But Carnegie Hall was special because all of my friends were there, my dad came from Florida, my in-laws came from London, and my picture was outside Carnegie Hall. Very rewarding.

What’s next for you? [RR] Martin and I are working on a new poster for our musical we’re doing in July and August off-Broadway at the 59 East 59th Street theater. We’re working hard…I’ve finished writing my autobiography, “My Life in Dog Years,” but I’m going over it and over it and over it because I keep forgetting stuff. And I keep living longer and have to add stuff.). 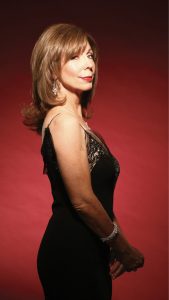 Rita Rudner, by the numbers

1982: Rudner made her network television debut on Late Night with David Letterman

4: Books Rudner has authored (I Still Have It; I Just Can’t Remember Where I Put It, Naked Beneath My Clothes, Tickled Pink and Turning The Tables) 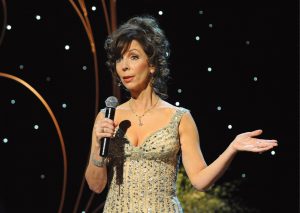