The life and times of a 4-star general

Four-star Gen. Wesley Clark is a highly accomplished man, both in his 38-year military career and in his civilian life since 2000.

The Arkansas native was a National Merit scholar in high school, valedictorian of his West Point graduating class, a Rhodes scholar, a Purple Heart and Presidential Medal of Freedom recipient, and a NATO Allied Supreme Commander in Europe.

Since he retired from the Army, he’s been an author, television commentator, businessman, educator and founder/CEO of a worldwide consulting company that specializes in business development, crisis support and strategic communications. 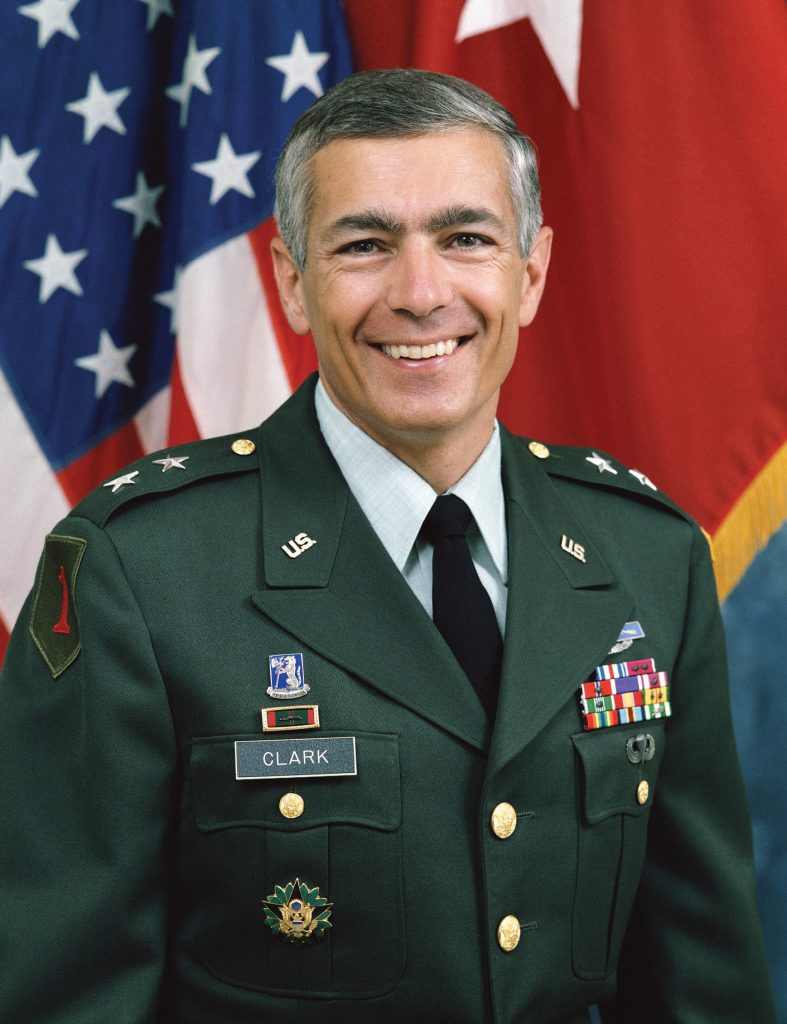 He formed a nonprofit action organization called “Renew America Together” in June whose goal is to achieve common ground in America, reducing partisan gridlock by promoting civics, citizenship and civility.

Clark will be on the island Oct. 4 speaking at the World Affairs Council, Hilton Head chapter, on deglobalization and its threats and challenges. He knows all about it.

He visited Hilton Head twice in the 2000s, attending Renaissance Weekend, a think-tank symposium of global leaders that was founded on Hilton Head in 1980 and now has forums nationwide.

LOCAL Life magazine caught up with Gen. Clark at his office in Little Rock, Ark.,
in late August. 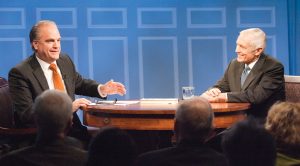 WATCH HIM
Retired Gen. Wesley Clark will speak on deglobalization and its threats and challenges at 10 a.m. Oct. 4 at First Presbyterian Church on Hilton Head Island. The program is part of Hilton Head Speaker Series. Details: wachh.org or 843-384-6758.

Here are excerpts from that conversation:

[LOCAL Life] Your list of achievements is remarkable for one individual. Have you always been driven to succeed? [Wesley Clark] I think the two things that really shaped my life were the desegregation crisis in Little Rock in 1957 and the launch of Sputnik. They drove my curiosity throughout my life and my determination for fairness and justice, in terms of what I learned from desegregation and the need to protect America, and learn science and technology because of Sputnik. I tried to learn chemistry. I tried to learn Russian. I started reading philosophy, and I tried to accelerate my abilities in mathematics. I was just motivated by my concern for the country.

[LL] What is your proudest achievement in your 38-year military career? [WC]
I did the right thing in trying to end ethnic cleansing of Albanians in Kosovo. There was no longer a Soviet Union and no longer a Soviet threat, and so all of U.S. national security strategy was in flux. It turned out there were plenty of challenges even though there wasn’t a Soviet Union. And one of these was the war that accompanied the breakup of Yugoslavia. I was part of a team that tried to persuade the parties to stop fighting. We did three months of shuttle diplomacy that culminated in the Dayton Peace Accords of 1995. I was promoted to NATO commander, responsible for enforcing the Dayton accords. (Serbian President Slobodan) Milosevic continued to use military force to eliminate these people and our campaign lasted 78 days against him until the surrender.

[LL] When you have moments of doubt making a decision or have to overcome a major obstacle enroute to your goal, what is your thought process? [WC] In general, you have to have to have a pretty clear idea of what your goal is, and you have to be pretty critical of yourself as you strive to meet the goal. You have to re-evaluate yourself and be willing to take a long-term view. You can’t look for an easy, quick fix.

[LL] Describe the transition from military life to civilian life in 2000. [WC] It was heartbreaking to leave the military because I really loved the people I was working with and the responsibilities I had been given. But, it was also exciting to come back to the United States and try my hand in the American economy. And I thought it would be great to teach, and if I was lucky, maybe even teach golf. I couldn’t wait to get started. (With frequent appearances on CNN and his strong views against invading Iraq) I became a favorite of the Democrats and before I knew it, I was being pressed to enter the presidential race in 2003. So, it delayed my investment banking.

[LL] You will be speaking on deglobalization here in early October. What exactly is it and why is it important? [WC] I formed an organization called “Renew America Together” because I think the partisanship that’s ripping this country apart doesn’t really reflect the American people. I’m going around the country often with a Republican counterpart and talking about America as we see it. I have a perspective I want to share. We want a strong America, good economic growth, taking care of people and making sure they have insurance and an education.

[LL] Is deglobalization achievable in today’s world of ideological discord, political divisiveness, religious and secular dissent, terrorism? [WC] Big countries need strong borders. I think what happened with globalization is we saw the advantages for corporations but it was supposed to be accompanied by diligent efforts to protect displaced workers and communities. We didn’t fulfill our responsibilities in that regard.

[LL] What is the single biggest threat to deglobalization and the single biggest opportunity? [WC] China in terms of its economy and Russia in terms of its nuclear weapons. So, this brief window where the United States was the lone superpower, I think we’re moving past that era. We have to focus on generating the kind of investments in America that will take us back into the lead of technological and economic development and to share those developing fruits around the world.

[LL] Describe your body of work and your life as a man, general, family man and leader. [WC] That’s like asking me to write my own obituary. I’m proud I’ve been married for 52 years. I have one son, two grandsons, and I love them. It’s kind of a miracle that we made it work through all the turmoil and stress of the military. I came home from Vietnam on a stretcher. I’m sure I had PTSD, but I didn’t know it for a long time. Somehow, it’s worked out.

[LL] Is there anything that keeps you up at night, given the state of world affairs? [WC] The United States has never had a national strategy except when we fought a war. And if you don’t have a strategy, you’re unlikely to get where you want to be.

[LL] What advice would you give a young man or woman who is in the military today? [WC] Study hard and do your best every single day. Look at the leaders above you, find the ones you believe in and emulate them. And remember, you can’t do much in life all by yourself. It always takes people around you to help you.

[LL] What advice would you give an ordinary American citizen about what they can do to make a difference in the world today? [WC] This is a really important question. The essence of a democracy and what we believe in is in the process of voting. The inherent wisdom of America as a whole is expressed at the ballot box. The electorate has to be educated and challenge the candidates with your concerns in depth. 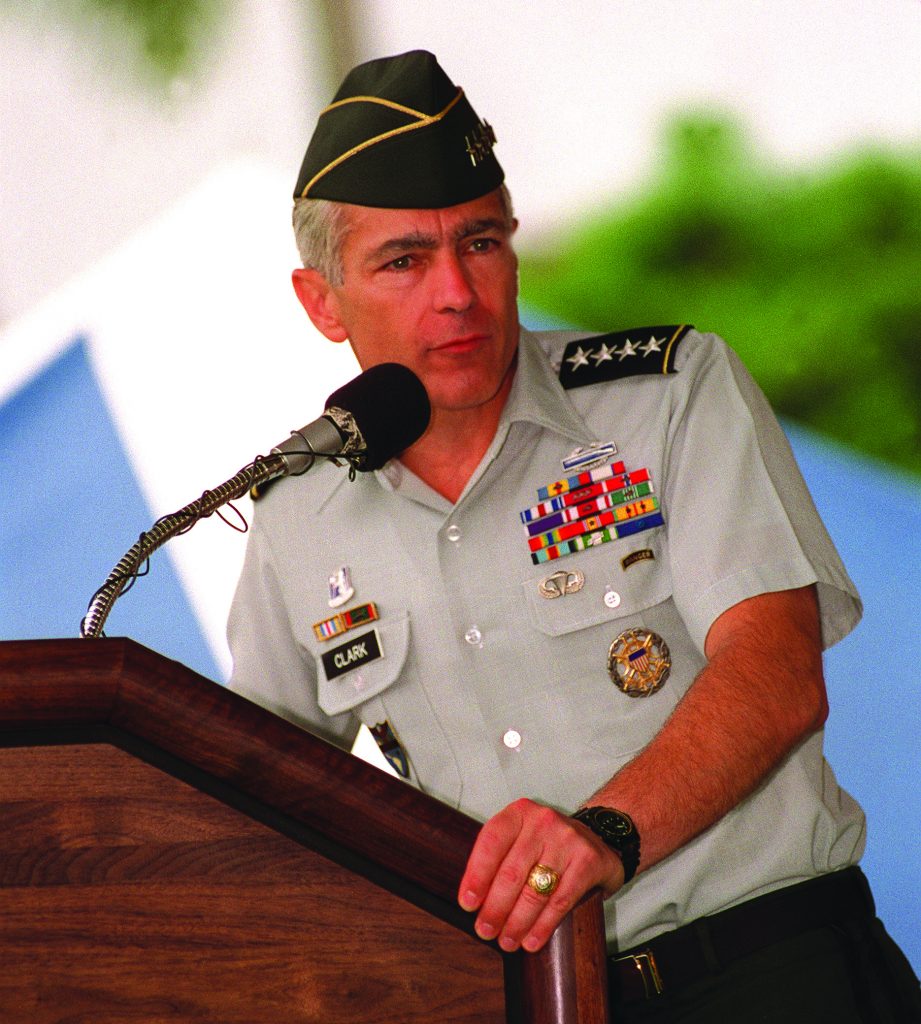 Rising through the Ranks

(Ret.) four-star Gen. Wesley Clark has packed a lot of living in his 74 years. Here’s a summary of milestones that the Chicago-born, Arkansas-raised achiever has amassed:

Civilian
• Married his wife, Gertrude, 1966
• One son born, 1969
• Publishes his military memoirs, his first of four books, 2001
• Joins CNN as a military analyst, 2003
• Announces his candidacy for Democratic nomination for president, 2003
• Founder and CEO of Wesley K. Clark & Associates, a strategic advisory and consulting firm, 2004-present