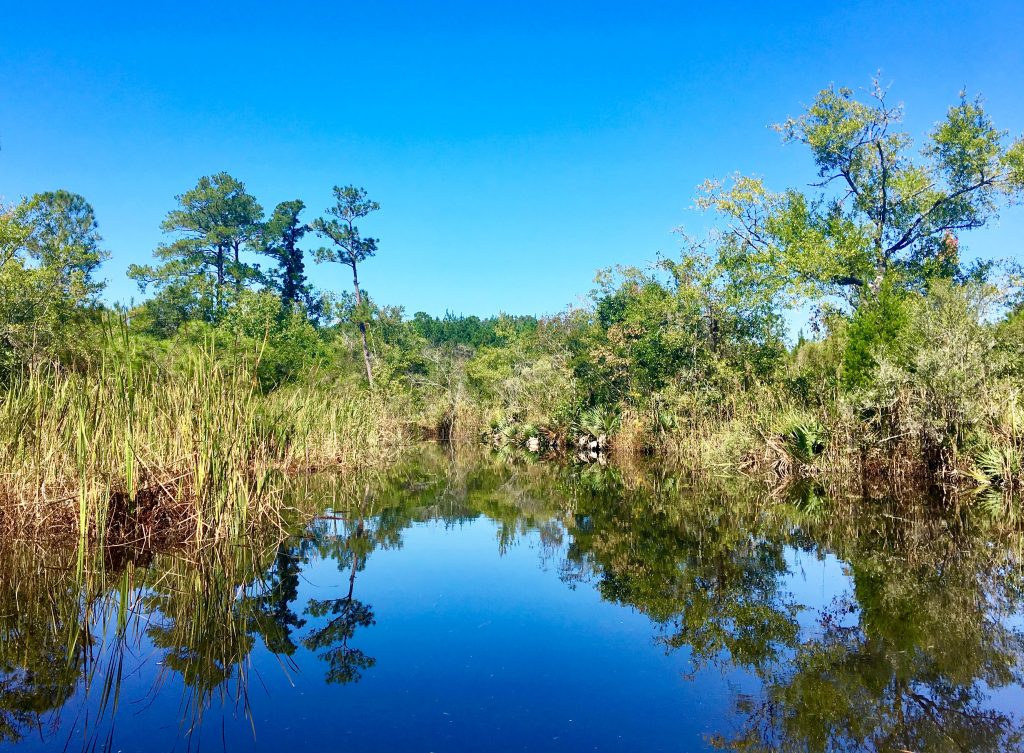 Far from the party boats and strings of docks on more glamorous waterways, the New River snakes its quiet course through wild country. You might have crossed it many times on the New River Bridge without even knowing as you drove the back way from Bluffton to Savannah. From hidden headwaters in the swamps behind Sun City to its mouth in the Calibogue Sound at Daufuskie, the New goes from blackwater to brackish to salt: from snakes and tarantulas, to alligators and flopping fish, to dolphins and crabs, respectively. But according to Capitan — the preferred title of my old friend and expedition mate when piloting his spray-painted, camo Jon boat in the Outback — there was a spot along it with more bald eagles than he’d ever seen in his life. A spot he called Eagle Crick.

A trip down the New is a voyage through history, as there’s little on the way to give it a visual update since former glory days as rice country. With nary a home for miles, all you see is unbuildable. Here and there dredged canals off the main channel cut straight back into the marsh, part of the old Carolina Gold rice cultivation system built by enslaved people during the plantation era. But Eagle Crick is a natural branch, winding by coils into a no-man’s land of mud and densely tangled vegetation. There’s not a single proper landing spot along it. The reeds teem with redwing blackbirds and an occasional racket denotes nearby gators. If you like human habitation, do not come to this place. Stepping off the boat and attempting overland travel would be frustrating if not fatal. We do not matter to the New River.

“Yeah, I guess that last hurricane took out the eagle’s nest,” announced our ever-inventive Capitan when we had traversed most of the creek without seeing any national birds. A snag in the distance was their former homesite, he claimed, but all I saw were a few buzzards. No matter — it was a beautiful day and we had shrimp salad sandwiches prepared by the ship’s cook (his sister) plus the joyful company of our skipper (his dog.) I am still first mate, even though he tried to demote me to swabbie following a tactical error (I improperly parked the boat trailer), but he’s already done that so many times I don’t sweat it anymore. He’ll never find a replacement — who else would understand Eagle Crick? Turning sweet gum leaves flared red in distant tree lines while late-blooming goldenrod glowed in the foreground; the perfectly still blackwater reflected a more profound blue than the sky. That’s pretty much all there was to it.

Places like this don’t mean much to most people, but to not have them would be a real loss — I need to know there’s still somewhere in the Lowcountry where we don’t matter. 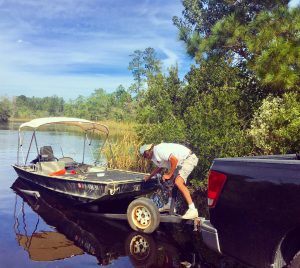 Directions: Put in at New River Bridge on Highway 46/170. Take a right and go downstream until you reach the first sizable creek to the right off the main channel. If you hit Cooks Landing, you’ve gone too far.

Travel tip: Check the tides — high water is needed to get back up in the creek, and if it falls while you linger, you’ll be stuck.