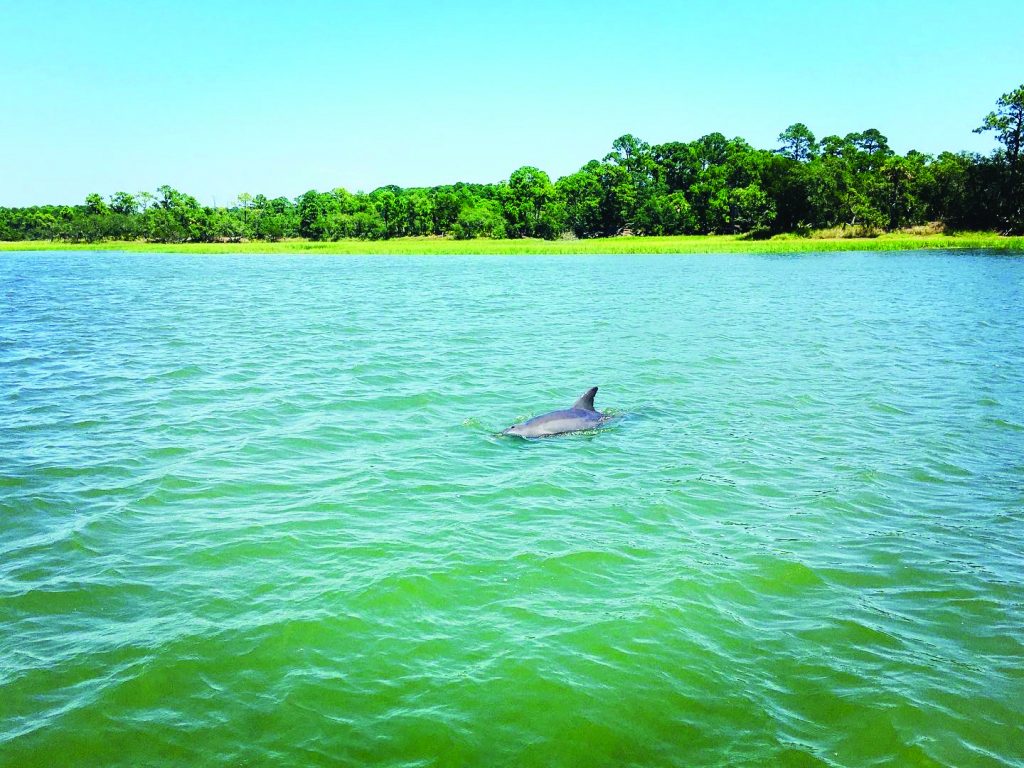 On a coastline flecked with hundreds of little islands, St. Phillips is truly special — or at least Ted Turner thought so. The billionaire media mogul and conservationist bought it in 1979 and vacationed there with his family for 40 years — fishing, kayaking, hiking the trails they carved out, and lounging in their lodge-style beach cottage. In 2017, he sold it to the state of South Carolina at a fraction of the value because they hardly ever visited anymore. Now anyone can feel entitled to this remote, 4,682-acre barrier island for the day: swimming and shelling the wild beach, exploring the primitive interior, or maybe just reading in an Adirondack chair on Turner’s old pier jutting over the Atlantic. In the future, you may be able to camp or even rent his house.

The unique profile of the island, which viewed by satellite looks like a giant cat scratched its claws over it, was created by ancient sand dunes. Trees grew up on the ridges while rainwater collected in the troughs, resulting in a spectacularly biodiverse environment of fresh and brackish ponds, saltmarsh, boneyard beach and a rare bit of old-growth maritime forest. It’s never been timbered or tampered with. The conservation easement Turner took out still stands, ensuring that it will never become another Hilton Head or Fripp. The only thing he did to mess with it was eradicate destructive feral hogs before reintroducing endangered fox squirrels and indigo snakes.

Trips run by Coastal Expeditions highlight everything that’s wonderful about St. Phillips and, by extension, the Lowcountry in its glorious natural state. On the boat ride over, the engaging Capt. Henry Brandt III points out wood storks and bonnet-head sharks, then discourses at length on phytoplankton and the love habits of dolphins. After twenty years as a nature guide, Capt. Henry saw something so singular about St. Phillips that he moved to St. Helena to be near it. During the tram ride from the ferry dock to the beach, he stops to gush about sabal palms nearly as tall as loblolly pines (which is how you know the great age of this forest) or to explain gator attack methods while standing right in front of one. At a prehistoric shell midden unearthed by a toppled red cedar, he goes into pre-colonial history of South Carolina, saying there were as many tribes around here as you can find river names today (Edisto, Combahee, Coosaw, etc.) This leads him to spin the yarn of some abandoned colonists who built a raft out of Spanish moss, pine resin and old shirts, then sailed it home across the Atlantic. “Yeah, some of them died or cannibalized each other,” he concedes, “but they made it!”

After infecting you with his enthusiasm, Capt. Henry turns you loose, and the island is yours to discover. I hung my pack on a driftwood snag, took a dip in the ocean, then meandered over to the Turner house. A fellow tour member was poking around, and I remarked, “Can you imagine having a place like this all to yourself yet barely ever being here?”

He said he couldn’t, then pointed out that Ted Turner is the second-largest private landholder in the United States. I imagined Turner running back and forth to all his residences yet never being more content with himself than the rest of us.

“I ran into him one time,” the man continued, “in Nantucket of all places. Fishing. He looked like an Orvis catalogue; had every sort of gadget you could think of. He was nice enough. A little on the weird side, but I guess we all are.”

I was the only one weird enough that blistering July day to forgo the return tram in favor of hiking back through the interior to the ferry dock, a stunning yet brutal experience. Old-growth magnolias lent dignity to the forest while cheerful palmettos towered over the trail. Swampy vistas opened with egrets flying out and Spanish moss silhouetted in the foreground. It was like a vintage illustration, but if you stopped to appreciate it, the bugs swarmed. I arrived sunburnt, blackened with sand road dust, and covered in mosquito and yellow fly bites — but filled to the brim with Lowcountry. A quick dip in the creek to refresh myself, and we were piling back on the boat to Hunting Island, which now seemed civilized by comparison. When I got home, I was as exhausted as a two-year-old after a day at the beach, but already planning my return trip.

How to get there: Book a tour through Coastal Expeditions (843-884-7684, stphillipsislandferry.com). The ferry leaves from the nature center at Hunting Island State Park.

If you go: Bring everything you need (food, water, layers, sunscreen, bug spray etc.) because there is nothing on the island.