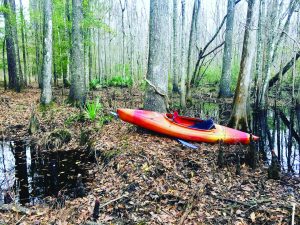 The New is a well-kept secret in Bluffton. You’ve likely driven over it countless times — on the back road to Savannah, after the New Riverside Circle but before John’s Junkyard — perhaps without noticing you’d crossed a river at all. The bridge is not impressive enough to convey the scope of New River, which runs many a snaking mile from its headwaters in the swamps behind Sun City to its outlet at Daufuskie Island.

Putting in at New River Landing, you can either go right (downstream toward the ocean) or left (upstream toward the headwaters.) This latter option provides the only real freshwater paddling in our immediate vicinity, as the river changes from salt to brackish to fresh the further inland it goes. The New drains vast tracts of swampland, and it’s possible to enter this secret wilderness hidden behind the gated communities and sprawl. But it takes hard work and a bold heart.

The journey starts easily enough. The river is bluish-brownish-black, lazy and semi-tidal with levels rising and falling against the reeds. On one side are old rice fields punctuated by tall pines and cypresses; on the other is scruffy forest. Autumn is pretty with blushes of color mirrored on the water. In warm weather big alligators bask at the edges. Wild blueberries grow prolifically along the banks, and I have foraged from my kayak.

But as one progresses upstream, the trees begin to close in on either side. The vegetation changes — gone are the reeds and marshes, the open sun and wildflowers. The forest darkens and tangles, and vines drape down to your boat. At this point the channel may be choked with huge rafts of dead spartina grass that get pushed upriver by king tides. But if it’s not, or if you manage to muscle through anyway, you soon will have to contend with fallen trees.

Most paddlers take this as a convenient turnaround point, but I have occasionally pushed on, portaging precariously by climbing onto the tree and heaving my kayak over it, then carefully lowering myself back in on the other side. One time I judged that I could just pass under a particular log, but coming nearer I realized I might scrape my head—and at close range I saw the underside was coated in tarantulas! It was too late to alter course, so I just ducked as low as possible, then franticly brushed my hair off on the other side.

The farthest I’ve ever gone up New River was an unexpected feat. Every time I thought it would end, it just kept going. Each new blockage became an invitation to proceed. I recall reaching a cleared power line right-of-way, after which I reentered the forest at a place I dubbed Alligator Alley. For whatever reason, they had gathered here in the greatest numbers and sizes I have ever seen on New River — but I’d come too far to balk. In the complete solitude and haunting environs, with a feeling of being in terra incognita, I experienced a burst of survival inspiration: I beat the sides of my boat with the paddle as a proclamation to the gator tribe that I would be in their midst. In my memory they parted before me, and I passed through Alligator Alley without incident. I still use the drumming technique today.

I’m not sure exactly where I was when I finally turned around. There came a point where the channel could no longer be discerned, as the river deteriorated into a swampy floodplain forest. I snapped a picture of a behemoth bald cypress, its mossy base and sprawling knees like something you’d see in Georgia or the ACE Basin; I had no idea such ancients lived in our well-trod coastal community. I doubt I’ll ever see it again.

Travel advice: From New River Landing on the Highway 170 bridge, go left and proceed as far as you dare. Once in the narrower part, be aware that a lot of different kinds of spiders live in the swamp, and brushing against foliage will cause them to cling to you and your boat as high ground.