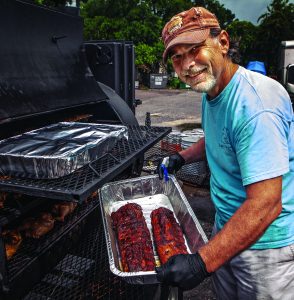 Michael Riley was retired from the Beaufort County Sheriff’s Office for all of a week in 2018 when he was hashing out plans for a whole new career in the restaurant business. He’d never worked in the food and beverage industry, but luckily, he was already a master.

“I’ve always had the dream of having a location of my own to cook barbecue,” says Riley, 51, the mastermind and pit master behind Retired Pig Barbecue, which operates out of Hilton Head Brewing Company, thanks to a partnership with brewery co-owner Juan Brantley.

“Our kitchen here at the brewery is very, very small. But it’s plenty big for us, ‘cause we do all the cooking outside,” says Riley, who now has three part-time helpers and a full-timer he’s trained to be an assistant pit master. They smoke just about everything on the menu, from the wings to the mac ’n’ cheese, and demand has been so high and customers so steady that within five months of opening, they had to buy a second smoker that’s twice as big as the original. Riley and his crew now use both smokers, stuffed daily with locally sourced hardwoods and endless amounts of meats and sides.

Riley’s friends and family had for years been praising his smoked meats, but he was never sure how much of that was due to their love of the food or their love for him. So when Brantley, who’s vegan, gave some of Riley’s smoked chicken to his mother to try, the feedback he received gave Riley the confidence he needed to follow his dream.

“The next day (Brantley) called me and said his mother, who’s a Southern woman born and raised down here, said it was the best chicken she’d ever eaten in her life,” Riley says. “That validated it for me. It’s like ‘OK, I got something goin’ on here.’”

Cooking everything outside has its share of challenges — the biggest one being the outside itself.

“There’s all kinds of variations (in cooking times) based on the fire, the humidity, the temperature outside, if it’s raining, if it’s hot. There’s a multitude of variations,” Riley says. “You’ve got to be really on top of your game keeping that cooker the way you want it to cook.”

Riley’s favorite type of meat to smoke is the brisket, because it’s one of the most difficult to get perfect.

“Brisket comes from the breast of a cow, so it’s basically like the cow’s pec. And it’s a really, really tough meat. It used to be trash meat back in the day. … So you have to cook it low and slow, and there’s a real fine line between overdoing it and underdoing it, getting it not dry, and moist and tender, there’s a real fine line to do that. And it’s all about temperature and cook time and prepping the meat, trimming it properly, and just hitting that mark.”

The decision to smoke his side dishes was, first and foremost, a practical solution to an interesting problem for a budding restaurateur to have.

“I wanted to serve mac ‘n’ cheese and I don’t have an oven, so I just thought ‘I’m gonna try it on a smoker,’ and It turned out to be one of my top sellers,” he says. The dish is homemade and smoked in an aluminum pan, “so just the top layer gets a nice golden smoky color and aroma. So it’s not getting oversmoked, but it does give you a little bit of a fragrance that lets you know this was cooked in a real smoker.”

He does make a few sides that are not smoked, like a cucumber dill salad, a black bean salad and a mayo-based coleslaw. With the exception of potato salad, everything from his rubs to his barbecue sauces (he makes a mustard-based one and a tomato-based style) to his jalapeño cheddar cornbread is made from scratch using his own recipes. “The way I cook is a passion,” he says. “I just want to feed people good food.”

Riley grew up in Alabama near the Chattahoochee River hunting, fishing and cooking over an open fire. “I’ve always liked the primitive fire-food type thing,” he says.

He landed in the Lowcountry at age 19 when he joined the Marine Corps, then transitioned to law enforcement in Beaufort County when he left the military. “I had over 32 years of service to God, country and county.” 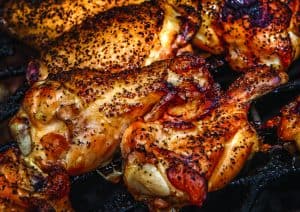 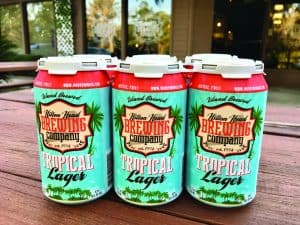 Wings = Tropical Lager. Light, bright and spritzy with just enough citrus to highlight the smoky flavor of the wings

Pulled Pork = Fool’s Gold Maibock. The strong backbone with honey tones works perfectly with the fattiness of the pork to make a heavenly pairing.

Brisket = Folly DIPA. All of the perfumey and divine sweetness of this DIPA bring forth the latent luxuriousness of the brisket itself. Heaven would weep at this pairing.