You say poh-tay-toe, I say poh-tah-toe … You say Alocasia, I say Colocasia

When we lived up north, I used to salivate over plant catalogues that offered elephant ears — especially the giant ones that looked so tropical. So naturally one of the first plants I purchased when we moved here was an elephant ear. I then discovered that, like canna lilies, they’re almost impossible to kill and, like the bunnies, they will jump around your garden without an invitation if you’re not careful. However, a wonderful feature is that the deer and bunnies don’t seem to like them.

Like most folks, I thought all elephant ears were alike. Silly me. There are actually three types of plants called elephant ears: Colocasia, Alocasia, and Xanthosoma. OK, some folks say there’s also another variety called Caladiums, but honestly, I’ve personally never heard Caladiums referred to as elephant ears.

Locally, we tend to refer to Colcasia, Alocasia and Xanthosoma as elephant ears. (We use Caladiums as annual plantings in containers and borders, but with our mild winters recently we’ve all been pleasantly surprised with their reappearance in the spring.) I then learned the hard way that not all elephant ears are created equal. Depending on the type, their needs are quite different.

The first of the elephant ear plant types is Colocasia. The leaves typically point downward. Colocasia is native to swampy areas of Asia, so it can take full sun and almost standing water. These plants generally have the petiole (leaf stem) connected to the leaf down a bit from the notch in the leaf. 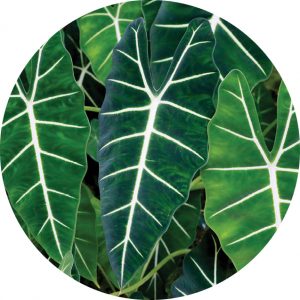 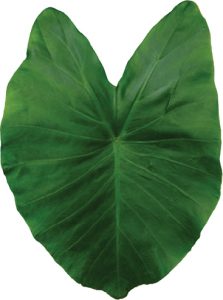 These plants are closely related to Colocasias but require much warmer temperatures (generally over 68 degrees) and usually have an arrow-shaped leaf blade with a smooth, sometimes waxy upper surface and thick ribs on the lower surface, often quilted at the veins. Under the heading of full disclosure, I personally can’t tell the difference and have had wonderful luck with them in my garden, understanding that they completely disappear in the winter months. A major difference between these plants is the one that is below the ground. Alocasia develops both tubers and rhizomes. To propagate Alocasia, a tuber is separated from the main growth and replanted. Alternatively, the rhizomes can be divided and planted separately to start new plants. Colocasia produces only tubers. Propagation is by separating and planting the tubers. (I’m still perplexed as to how these little guys pop up in different areas of my garden, but perhaps the squirrels are the guilty culprits?)

Many Colocasia varieties are grown for their edible tubers, called taro. Taro is an important food crop in Hawaii, where Colocasia is widely cultivated. However, most varieties of Alocasia are not edible. Some are highly poisonous, and eating them could be fatal! So, it is safer to assume that nursery plants are non-edible varieties (and according to my family, so is my cooking) rather than take a chance.

What is the biggest difference between a Colocasia and Alocasia? Well, it’s microscopic, found within the female flowers. What?! You don’t have a PhD in botany? Well then, the easiest way to distinguish between the two is if the leaves point up, the plant is probably an Alocasia; if the leaves point down, it’s probably a Colocasia. Want to know if it’s a Xanthosoma? Good luck! Happy gardening!

Dear Accidental Gardener,
I purchased some very expensive Japanese Grass plants last spring. They seemed to be flourishing until last week, when they all but disappeared! My landscaper told me he spotted a bunny in my yard. Could it be that the bunnies are eating them?
— Hoppin’ Mad in HHP 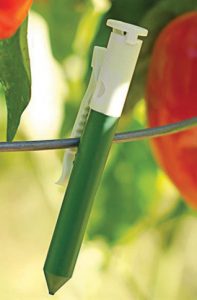 Dear Hoppin’ Mad,
I’m sorry to confirm your guess but yes, those cute little devils love Japanese Grass which unfortunately is not only expensive but a very slow grower as well. Take heart though! A wonderful friend introduced me to Garlic Clips which I found online. I had a similar issue and clipped these little vials filled with garlic scent to cheap wooden shishkabob skewers throughout the garden and so far, so good.