One of my most favorable accidents occurred years ago and involved my first purchase of curcumas. 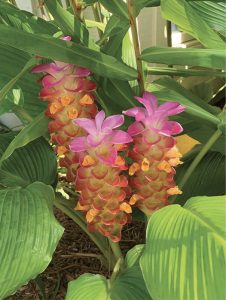 After months of home renovation, we had gradually moved in and frankly I was tired of the commercial dumpster out front being the only touch of green in the yard. There was one particular moist spot in the yard which quickly decimated any attempts at growing sod. As it was in full sun, I decided to install pretty plants that would become the feature in the front yard.

Thus, armed with my checkbook, I also learned which plants, despite the full sun, hated having wet feet; oleanders, citrus, roses, gardenias, white birds of paradise, desert willows, Brazilian walking irises, geraniums, and sadly, the list goes on and on.

However, I also discovered that Siam curcumas thrived in the full sun as long as the soil was moist. This also proved true for African irises, ornamental ginger and variegated ginger. I later tried my hand at Sulee curcumas which are even showier and certainly dearer. Sadly, the Sulees are not as tolerant of the full sun as their cousins and, while the full sunshine did not kill them, they certainly suffered and had to be transplanted.

Siam curcumas stand roughly 18 inches high and are perfect for mass plantings or as a border. Their Sulee cousin is taller, ranging 2 to 3 feet tall but with even larger flowers rivaling a pineapple. I also planted what I was told is “hidden ginger” – growing to 6 feet tall, the beautiful flowers appear at the base of the plant and are almost hidden from view. All of them benefit from an application of organic fertilizer in early and late spring. Happily, these plants gradually spread each year, making them wonderful plants to share.

Curcumas should be planted after the last threat of frost. They completely disappear in the late fall and will not reappear until late May mistakenly causing the newly initiated to think they’ve died. These plants produce excellent cut flowers, which can last up to 14 days. If placed in a slightly shaded position, flowers on the Sulee plant can remain for up to two months.

Curcumas are in the ginger family and all but one are inedible. While there are over 100 varieties of curcumas, the most common in the Lowcountry is the Siam variety. I accidentally discovered a wonderful source for unusual curcumas at Gingerwood Nurseries in Louisiana when trying to learn about my own plants several years ago. The owner, Tim Chapman, is extremely knowledgeable and will freely share his expertise. So if you have a problem area in your yard, I hope you will be able to make lemonade from lemons. Happy gardening!

Save it for a sunny day

Rain barrels are an easy, efficient solution to water conservation and stormwater runoff. Did you know around 600 gallons of rainwater can be harvested from about one inch of rain if it falls from a 1,000 square foot roof? That is a lot of free water you could be capturing to irrigate your yard and garden. Because it’s naturally soft and free of chlorine and other chemicals, your plants will grow happier and healthier. Rain harvesting is also a smart way to deal with those dreaded watering restrictions that always seem to come when you plants need water the most.

RTS Home Accents Rain Water Collection Barrel This beautiful 50-gallon barrel will not fade, rot or risk insect infestation. It features a flat back to sit flush against a wall and is linkable to other barrels to increase water collection. It features a brass spigot shut-off valve for hose hook-up with dual overflow. A front side overflow keeps water from flooding against your outside wall. Available at rtshomeaccents.com. $100

Dear Accidental Gardener,
when we lived in Ohio, I planted 10 red raspberry and 2 gooseberry bushes; as a result we enjoyed fruit all summer. I wanted to do it here, but we were told the following:
1. It is illegal to grow it in Carolinas.
2. They need to go dormant (see some cold weather) to bear fruit next season.
Please advise.  — Berry Lover from Barberton

South Carolina does indeed have a ban on gooseberries to protect the white pines, but it appears to exclude Beaufort County. You may want to verify with the state to ensure the ban is still only active in Spartanburg, Greenville, Pickens, and Oconee counties. With respect to raspberries, while many fruits do indeed need some cold to produce, there are heat tolerant varieties available for purchase on the internet. Similar to citrus, I would protect them from winds and would further recommend planting them where they will receive morning sun and afternoon shade due to the high heat and humidity of our summers in the Lowcountry. Happy planting!