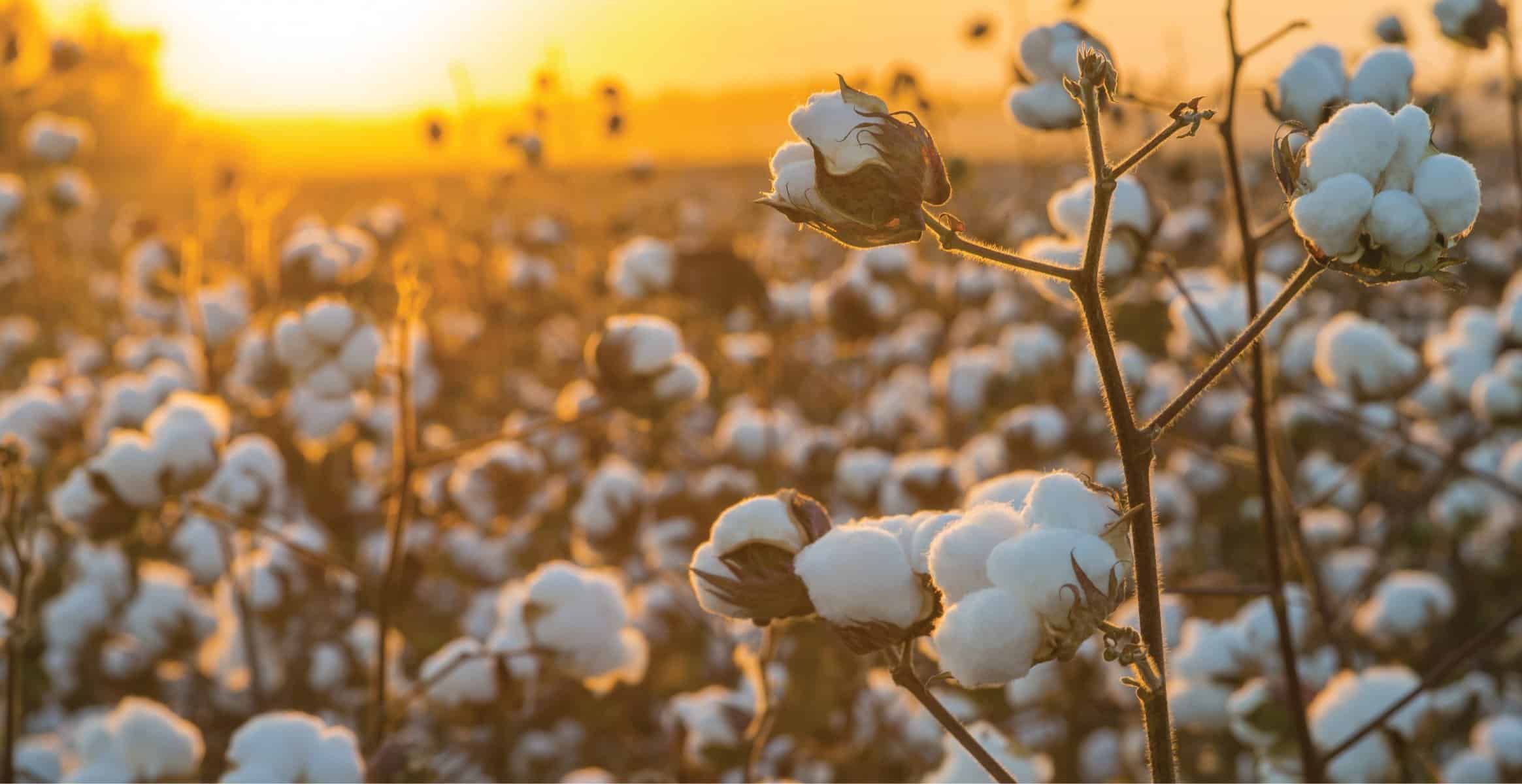 Did you know that cotton has been around an exceptionally long time? The first evidence of cotton farming dates back 7,000 years to the Indus Valley in India, and seeds dating back to 450 BC were found in Peru. The Arabic people called it “Qutum” which is where we get the word “Cotton.”

In fact, cotton has been around so long that its very name morphed over the centuries from a noun to a verb (most notably meaning to get along with or to like) and became a cliché or idiom (depending on one’s perspective) as early as the late 1400s as evidenced by its use in the 1605 Play Stucley. To “cotton to” is an idiom meaning to like something. 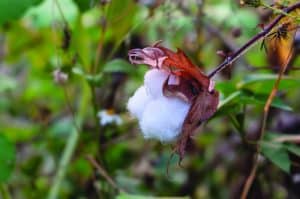 Cotton is constantly surprising people with its applications and abilities. In bloom, cotton is reminiscent of its cousin, the hibiscus flower. Both are members of the Mallow family, and while it is a perennial shrub, cotton is primarily grown as an annual crop, which helps prevent the increase of its pest population (more on that later).

Cotton is sustainable, renewable, and biodegradable, making it an excellent choice as an environmentally friendly fiber throughout its entire product life cycle. The seeds are planted in the spring and harvested in the fall. All of the cotton plant is used — while fiber is the primary reason for growing cotton, the seeds are used for animal feed and human use (cottonseed oil), and the plant stalks are tilled back in the soil after harvesting. It takes about five to six months for the plant to mature and the bolls to open for harvesting.

Did you know cotton is not absorbent or pure white? It is actually a tannish color. It wears a protective coat of oils and waxes so it can’t get wet and rot in the fields. To make it absorbent, the oils and waxes have to be removed. To make it white, the fiber has to be purified. Crane and Co. has been providing the U.S. government with paper for our currency since 1879. Our dollar notes are actually a blend of 25 percent linen and 75 percent cotton.

Two basic types of cotton have been grown in South Carolina. The cultivation of Sea Island or long staple cotton was restricted to coastal areas south of Charleston. Upland or short staple cotton was successfully grown in the interior of South Carolina. Some claim that the Sea Island variety was the highest quality cotton in the world. It had a long silky fiber or staple (1.5 to 2.5 inches) and could be spun into a thin thread that could be woven into the finest quality cloth and laces. Several types of long staple Sea Island cotton were grown, but the highest quality was grown only on the Sea Islands south of Charleston. It was especially significant on Edisto Island and in the Beaufort area. 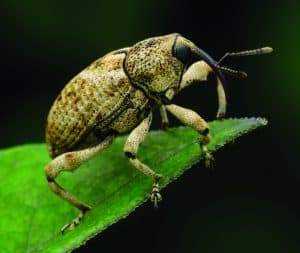 Sea Island cotton production tapered out in the decades leading up to 1920, but the final blow was the invasion of a grayish beetle known as the boll weevil in the early 1900s. Cotton’s only natural enemy, the boll weevil destroyed 70 percent of South Carolina’s cotton crop in two years.

The name of this insect was derived from its habit of laying eggs in the cotton plant’s boll. The complete life cycle of the boll weevil only lasts three weeks. Despite a short lifespan, their damage can be devastating, as one female is capable of laying up to 200 eggs. These little grayish beetles have cost America’s cotton producers more than $15 billion – from yield losses and costs to control the insect. It wasn’t until the 1960s when scientists discovered the sex attractant pheromones of the beetle that true containment and eradication were achieved by creating a lure that could be used to trap the amorous boll weevils. Re-infestation of the pest would be devastating to the economy. Nationally, the cotton crop earns about $6 billion a year. A traditional staple of the South Carolina economy, cotton is the state’s most valuable field crop and routinely covers 300,000 acres.

Therefore, if you’ve entertained the idea of planting cotton in your yard, please be advised that it is against the law. As a way of supporting boll weevil eradication, Congress put the Boll Weevil Eradication Equity Act in place. This act states that cotton may not be grown for noncommercial purposes without a special waiver issued by the state’s plant board. Happy gardening! 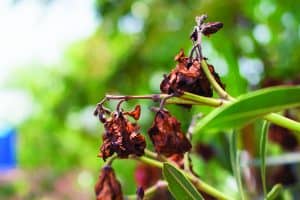 I dearly love my oleanders, but they are looking more straggly and spindly than my husband’s hair. What can I do to make them full again? Should I just rip them out and replace them?

I hope you’re referring to your plants and not your hubby. If it’s plants, fret not! Just like humans, oleanders benefit from a good hair cut in early spring. Simply trim the top third of the branches down and your oleander will appear fuller and bouncier in no time at all.

Got a question for the Accidental Gardener? Email info@wearelocallife.com. 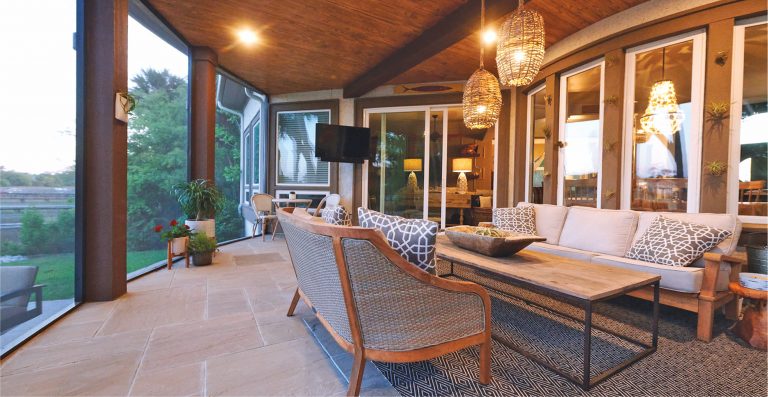 Witness a stunning transformation of a backyard paradise 20 years in the making. Story by Barry Kaufman + After photos…

The interior design and architecture of the Lowcountry that went down in history and lives on today.

If you’re disappointed by the availability, freshness or the price of collard greens at your favorite grocery store, consider growing…

This Palmetto Bluff home started with two simple mandates. It ended with a beautiful example of Lowcountry living. 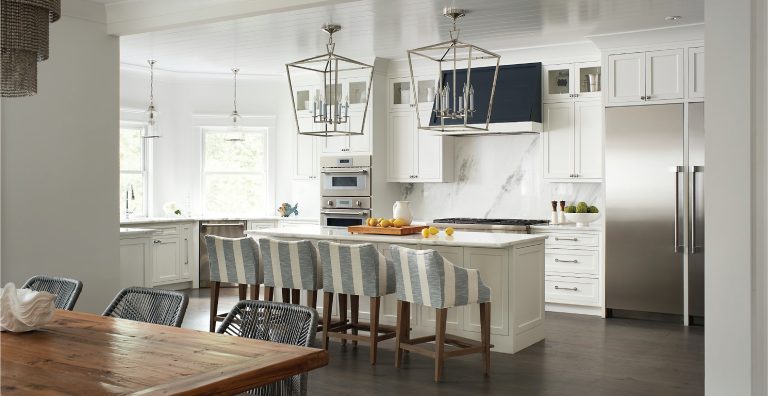 Create a relaxing and stylish sitting room with these suggestions from Plantation Interiors.