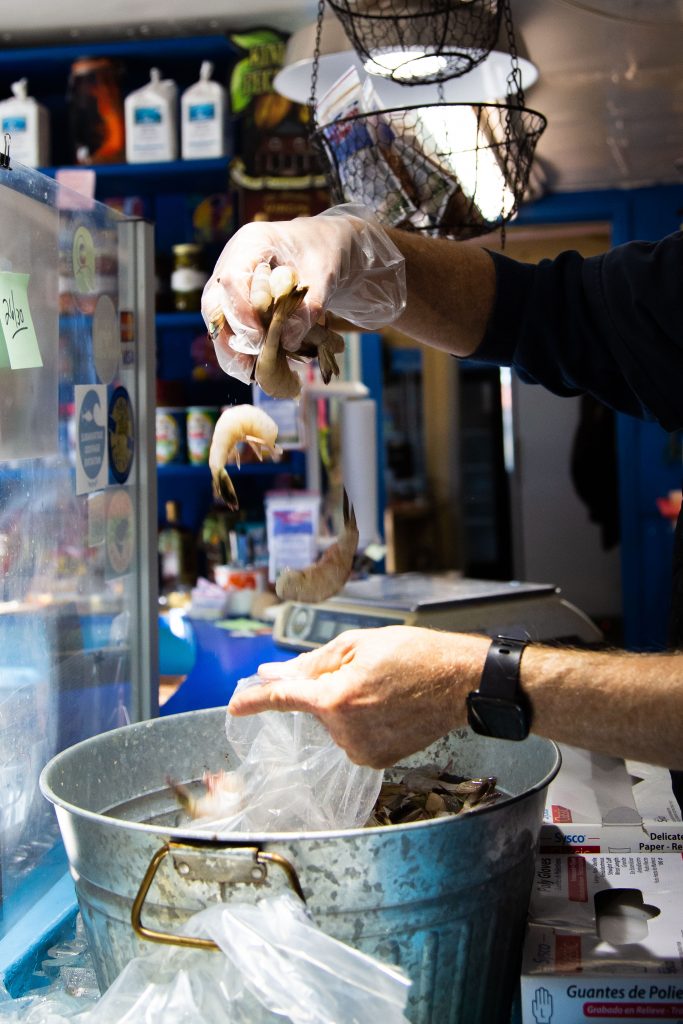 The aroma of chicory coffee begins to fill the room as Barbara Hudson passes from the open kitchen into her charming living room with two mugs of steaming coffee. After sitting down to discuss the history of one of the two families that have been the gold standard of seafood on Hilton Head, the Hudson matriarch shows me a necklace with a two-sided gold medallion. One side reads “J.B. Hudson Hilton Head, SC” and the other side reads “good for 25 in merchandise.” This memento is a reminder of a once grand seafood dynasty that has been present on the island since the 1890s and at its height, encompassed several oyster factories, a shrimping and crab business, a fleet of workers, and a company mercantile shop.

The Hudson family began as farmers in Orangeburg and migrated during the summers to the cooler temperatures of Hilton Head. After realizing the abundance of seafood, and the money that could be made from its harvest, Ransom Hudson permanently relocated to the island and began to grow his family’s business.

Ransom’s son Benjamin, like his father, also was the local magistrate and postmaster. Besides civic duties, Benjamin managed three oyster factories that processed raw product as well as producing select oysters and canned steamed oysters. In addition, he ran facilities that brought in shrimp and blue crabs. The business and family were thriving on Hilton Head. When Benjamin died in 1954, his son Benny, who managed two of the oyster factories, took over the only family business he was interested in: the seafood.

After declining to move forward with being the next Hudson magistrate judge due to a dislike of spending his days in a courthouse, Benny went head on into growing the seafood enterprise.

After the swing bridge was completed in 1956, Benny married Barbara and together, they took advantage of the influx of visitors and new island development. During the ‘60s and into the ‘70s, the Hudsons were extremely diversified. The family docked dozens of shrimp trawlers and owned and operated several boats themselves. They farmed 52 acres of oyster grounds that were maintained and reseeded every year. On top of it all, Benny was building Hudson’s Seafood Restaurant in the old oyster factory located on Skull Creek.

According to Barbara, Benny was hardworking, knew the shrimping industry and was so beloved by the shrimpers that they all wanted to dock with him. Business was booming with the majority of wholesale shrimp on Hilton Head coming from the Hudson facilities. 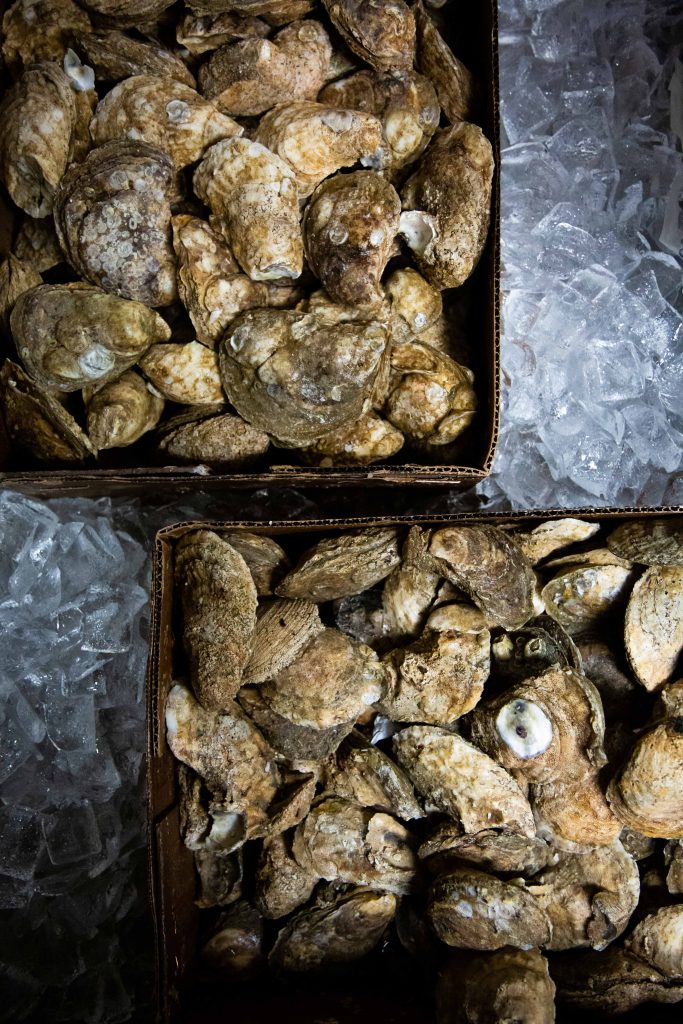 In the mid-‘70s, the Hudson empire was coming to a close, so Benny and Barbara thought. Benny sold the restaurant to the Carmines family and the two decided to follow their shrimp boat down the Florida Keys on its annual shrimping trip to the area. The couple decided to stay. After five years of learning life and fishing in the Keys, the Hudsons yearned to be back in the Lowcountry.

Upon their return, the Hudsons soon found that their friends in the shrimping game wanted them to get back at it. The next thing Barbara knew, Benny had built the current dock and fish house located on the property. Trawlers started showing up and they were back in business.

This time around the two decided to keep it simple. They opted to just work in shrimp and freshly sourced fish. Oysters and crabs were off the menu, outside of special guest requests.

Things went along as such until October 2016. Hurricane Matthew damaged the dock enough to take it out of commission and two boats were abandoned by their owners; left for dead outside of the occasional fuel belch from below the sound.

As with everything else, the business changed. New regulations, a spike in fuel prices and the influx in lower quality, farm-raised imported shrimp have forced the smaller, family seafood businesses, like Hudsons, to source and sell for a niche market; one that looks for a quality product that they know is responsibly harvested. Now, the Hudson family prides itself on sourcing fresh fish from wherever they can find the best product for their customers. Their salmon may come from Scotland and their scallops from Virginia, but anything they can source locally in season, they do.

Respected product and reliable customer service is what has kept this family afloat for generations.

Plenty of Fish in the Sea

“As the water temperature drops with the colder weather, shrimp swim offshore toward warmer water and begin their spawning. During the colder months, we still have plenty to keep us busy though. Oyster season is in full swing as well as clams and mussels. Blue crabs are also running as well as a few stone crabs here and there. Fish are plentiful inshore (flounder, trout, bass, sheepshead, drum) as well as offshore (swordfish, mahi-mahi, mackerel, snapper, grouper). Some fish are limited to catch-only during certain times of the year or by limited catch restrictions. This is all regulated by SCDNR or South Atlantic Fisheries Management. Both have websites with real time information on restrictions (dnr.sc.gov, safmc.net).” — Tonya Hudson-DeSalve 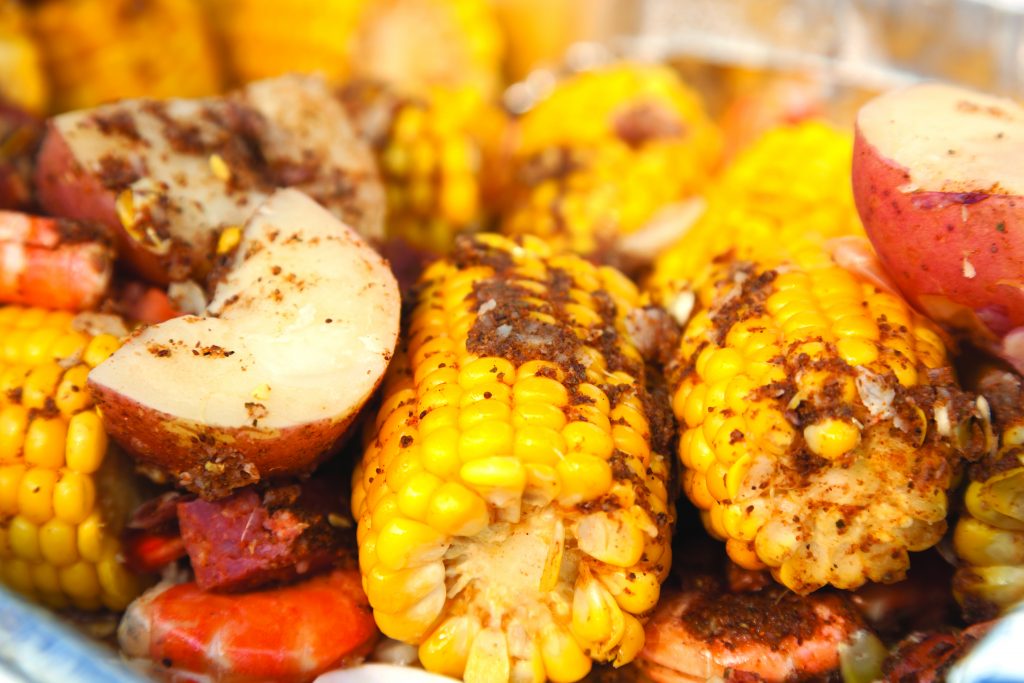 Directions [1] In a large stock pot, bring water and seasoning to a boil. Add potatoes and sausage and cook for 15 minutes. [2] Add corn and cook for an additional 10 minutes. [3] Add shrimp and cook for 2-3 minutes. [4] Drain pot and pour contents onto a table covered with newspaper. Enjoy with fresh lemon wedges and Benny Hudson Seafood homemade cocktail sauce. 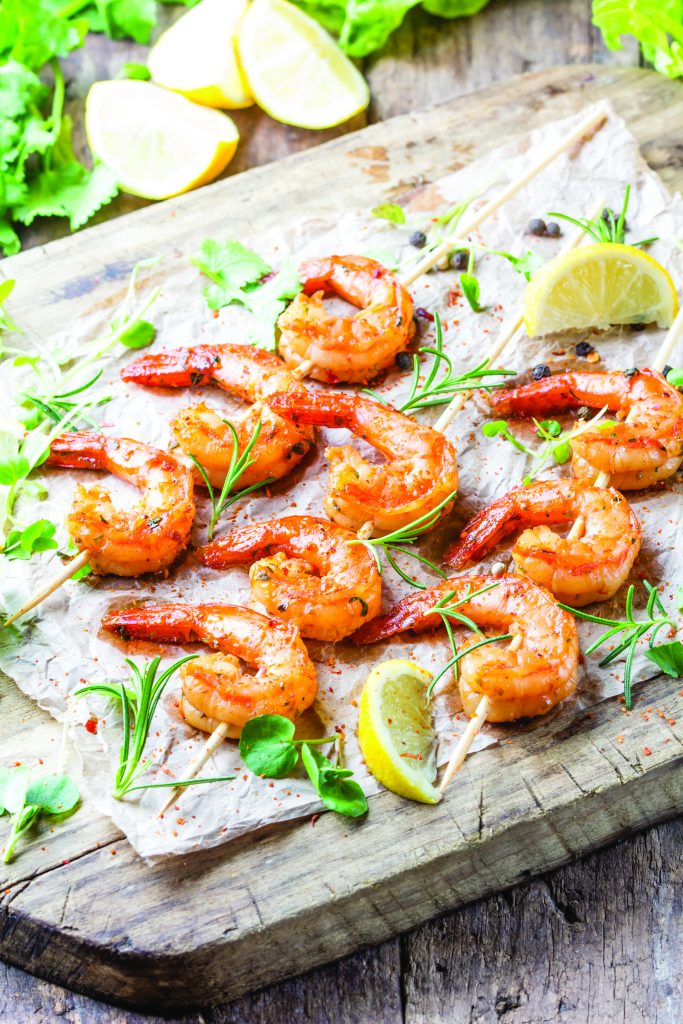 Directions [1] Rosemary sprigs should be stripped, leaving 1/2 inch of leaves at the leafy end of the sprig. They should be soaked in water — the longer the better. Overnight or a minimum of 3-4 hours. [2] Combine first 7 ingredients in zip-lock bag. [3] Add shrimp and refrigerate 30 minutes, turning bag occasionally. Thread sprigs with shrimp, 3 on each. Make sure not to crowd shrimp for even doneness. [4] Pre-heat grill to med-high heat. Clean and grease grill with olive oil. [5] Cook 2-3 minutes per side, or until just cooked through. Plate with lemon wedges as an accompaniment, if desired.