One of the most unexpected amenities of The Sea Pines Resort, Lawton Stables is a little slice of farm life amid the sophisticated grandeur of the resort’s clubhouses and golf courses. Whether its residents know they live among million-dollar homes or not, each of them is living the sweet life in Sea Pines. We wanted to take a moment and introduce our readers to a few of the resort’s most intriguing residents. 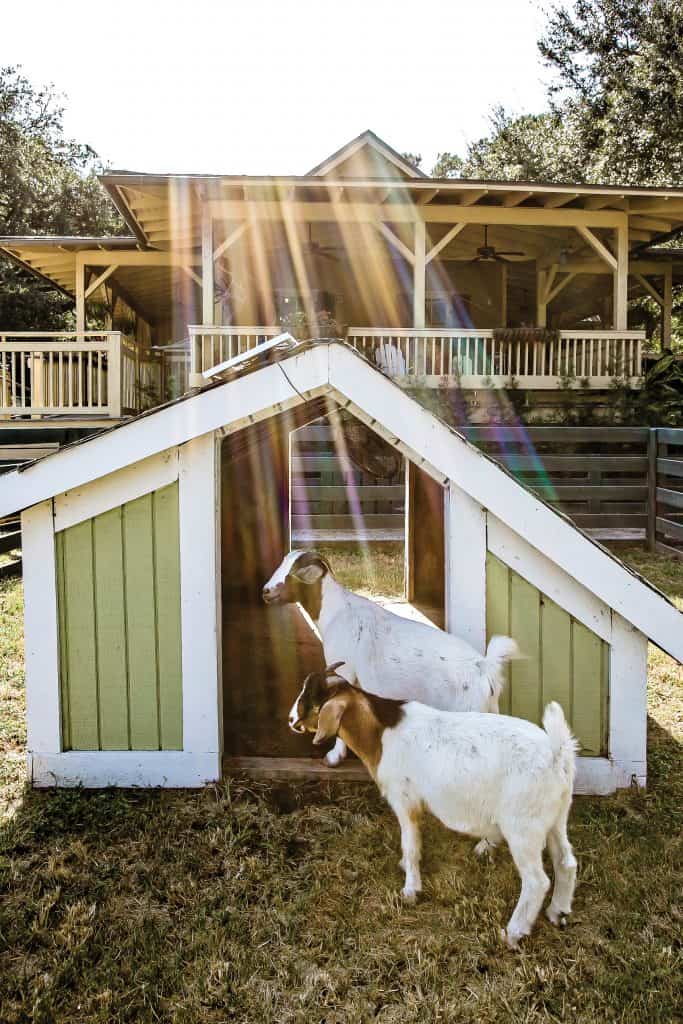 This trio of troublemakers lords over the goat pen at the far end of Lawton Stables, where they engage in the world’s longest-running game of “King of the Hill.”

“They love to be up on things,” said Zimmerman.

Generally speaking, this means a battle to see who gets to stand on top of the flat-topped boulder in the middle of the pen. But while the other goats were playing checkers, Marshmallow was playing chess. “Marshmallow figured out how to get on top of the house.”

Marshmallow, Milo and Otis all came from Laura’s Little Critter Barn, a farm in Grays Hill.  They have adapted well to the pen after living with a herd of goats that was attacked by wild dogs. “Laura nursed them back to health and we adopted them this spring,” Zimmerman said. 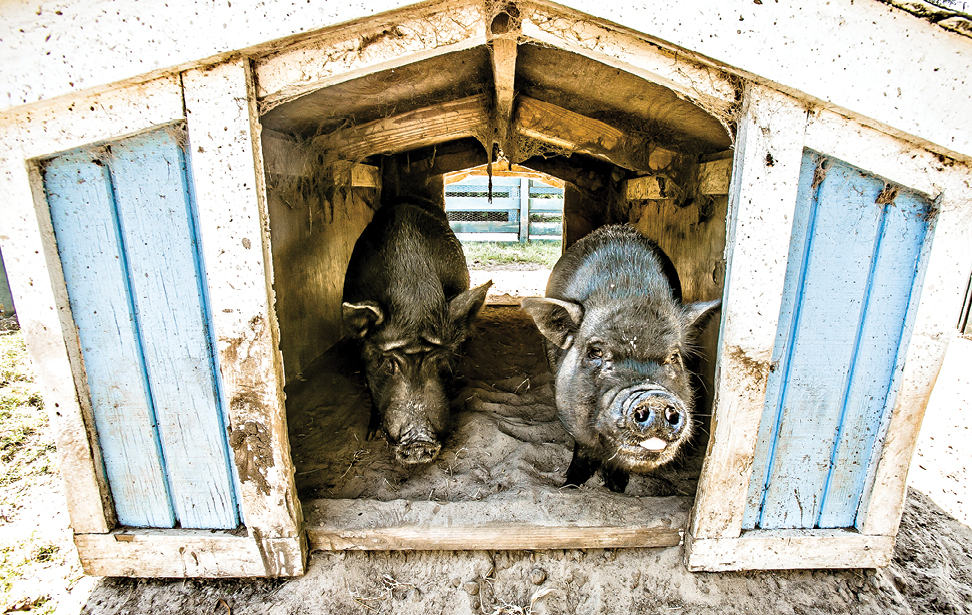 The thing about Buddy and Beauty is that they’re both pot-bellied pigs. It’s just that Beauty is the only one who seems to know that.

“Buddy came to us from a family where he was living in the house with a Labrador. Eventually the Lab was getting annoyed with him so the family asked if he could live here,” said Zimmerman. As a result of living alongside a dog, Buddy has picked up some decidedly canine habits. “He loves belly rubs… and he’ll flop over just like a Lab. He’s super social.” 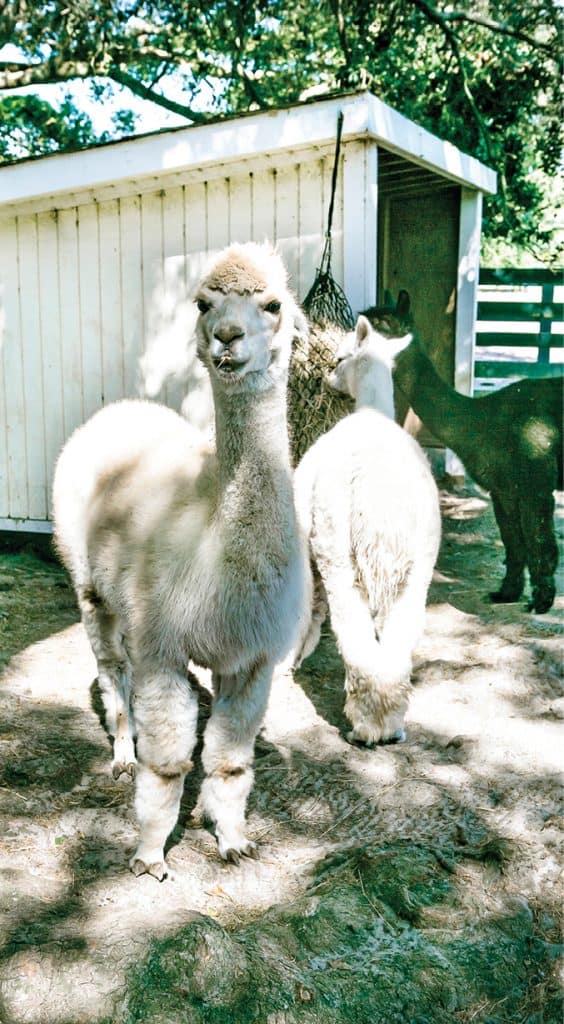 Those who are up on their cartoons will immediately recognize the origins of the names of Lawton Stables’ resident alpaca family. For everyone else, we’ll save you a Google. All three names from from Disney movies – Bagheera from “The Jungle Book,”

Bianca from “The Rescuers” and Yzma from “The Emperor’s New Groove.” Begheera, the black one, is the papa of the family, with Biana (white) the mother and Yzma (tan) their baby. “Bianca is very protective of Yzma,” said Lawton Stables General Manager Haley Zimmerman. “When they get sheared once a year, we have to catch her first because she’ll spit at us.”

The flock at Lawton Stables is a 50/50 split of hens and roosters, although that wasn’t originally the plan. Originally, it was going to be Hai Hai ruling the roost with a trio of chickens. And then came Sarah. “Yes, his name is Sarah. They named him very young before they realized he was a male.”

While that’s very progressive of Sarah, it did create the problem of too many roosters for too few hens. As such, Hai Hair and Sarah were kept apart so they couldn’t see each other. Sadly, the day this article was scheduled to be sent to press, Sarah passed away of natural causes. 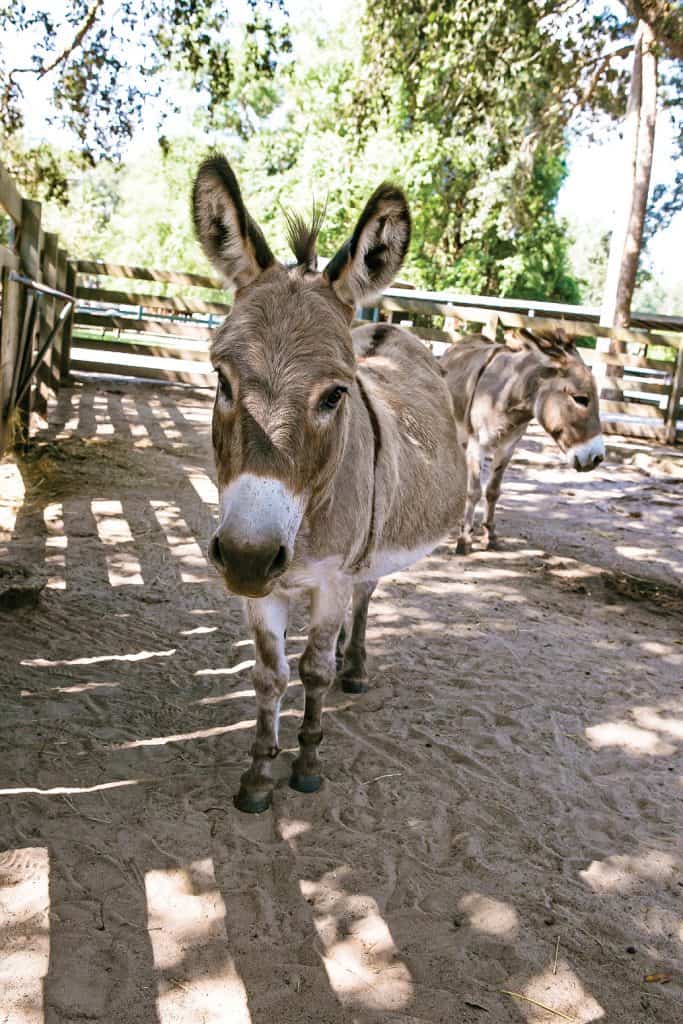 Donkeys are known for their stubbornness, but someone forget to tell that to Pedro and Cisco. “They are just so good. They’re very easygoing.”

If there’s anything these two are stubborn about, it’s their friendship. Pedro recently developed a slight cataract in his eye, and now essentially follows his old friend Cisco around as a seeing-eye donkey. “They really like each other. They’ve been here as long as I can remember, over 10 years.”

If you’ve ever tried to take a handful of food to one of the alpacas or the goats, you’ll know Santiago. This brash young mini-horse is not shy about getting his nose in front of the food, even if he has to shove a little bit. And if you try to sneak away, he’ll let you know he wasn’t finished by hoofing the fence until you come back with food. 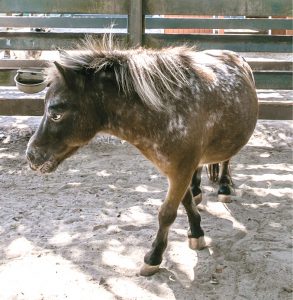 “He really thinks he’s something special,” said Zimmerman. He first arrived at Lawton Stables five years ago as a fully intact stallion, but even a gelding didn’t take the fire out of him. “He challenges the other horses, even though they are much larger than him. That’s why he lives with the donkeys and the alpacas.” 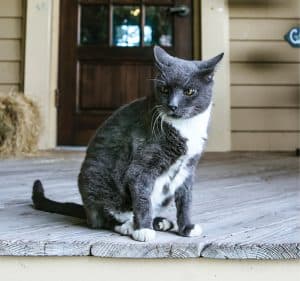 Every good farm needs a cat, and Lawton Stables is no exception. For a time, Jackie fulfilled her role admirably, keeping the rat population down and even taking out a copperhead that had snuck into the stables. The venomous snake wasn’t enough to stop Jackie, but it turned out something far more insidious would put an end to her hunting.

“Jackie has horrendous allergies to pollen, so she has to a lot of allergy medication,” said Zimmerman. “She used to be a really good hunter. Now she just sits on a blanket and eats gourmet cat food… but she’s the queen, for sure.”