Many homegrown favorites came well before the bridge.

This is not a story about Southern food favorites such as fried chicken, pulled pork smothered in a South Carolina-based mustard sauce, fried green tomatoes, cornbread or hushpuppies. As good as they are, they are found everywhere in South Carolina, other states in the South and well beyond. 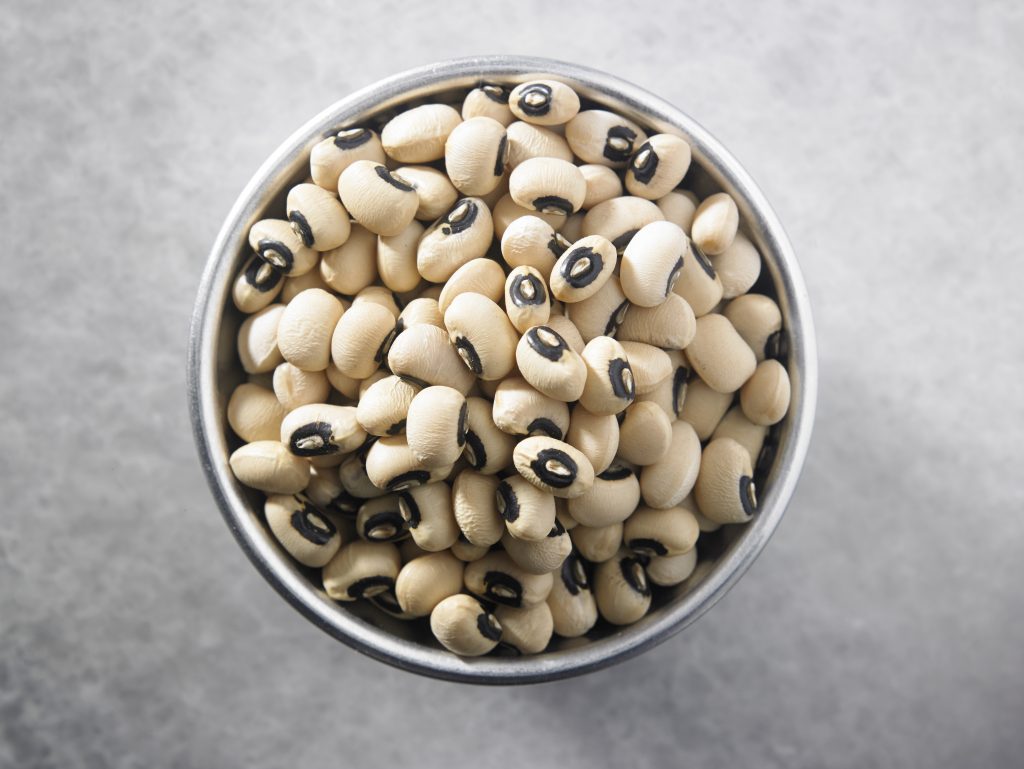 This is a story about traditional and sometimes native Lowcountry foods and their subsets of inspiring culinary groups such as Gullah, creole, soul and Cajun, all considered comfort foods. The Lowcountry — a geographic strip of land that stretches along the South Carolina coast from Pawley’s Island in the north to the Savannah River at the Georgia border in the south and extends about 80 miles inland to the Fall Line — stamps its culinary authenticity on okra, collard greens, she-crab soup, Frogmore Stew, Hoppin’ John, and on and on.

Besides the seafood bounty of oysters, shrimp, fish and crabs and its myriad interpretations, rice was the predominant grain cultivated in the Lowcountry because of its hot, wet climate and nutrient rich marshlands.

When enslaved Africans from Sierra Leone, Angola and other west/central locations were transported to the Palmetto State in the late 1600s, they brought along their formidable skill of planting and growing rice in their homelands for many centuries. They cleared marshlands to create lush watery rice plains on plantations, and it became an economic staple, let alone part of their daily diet. 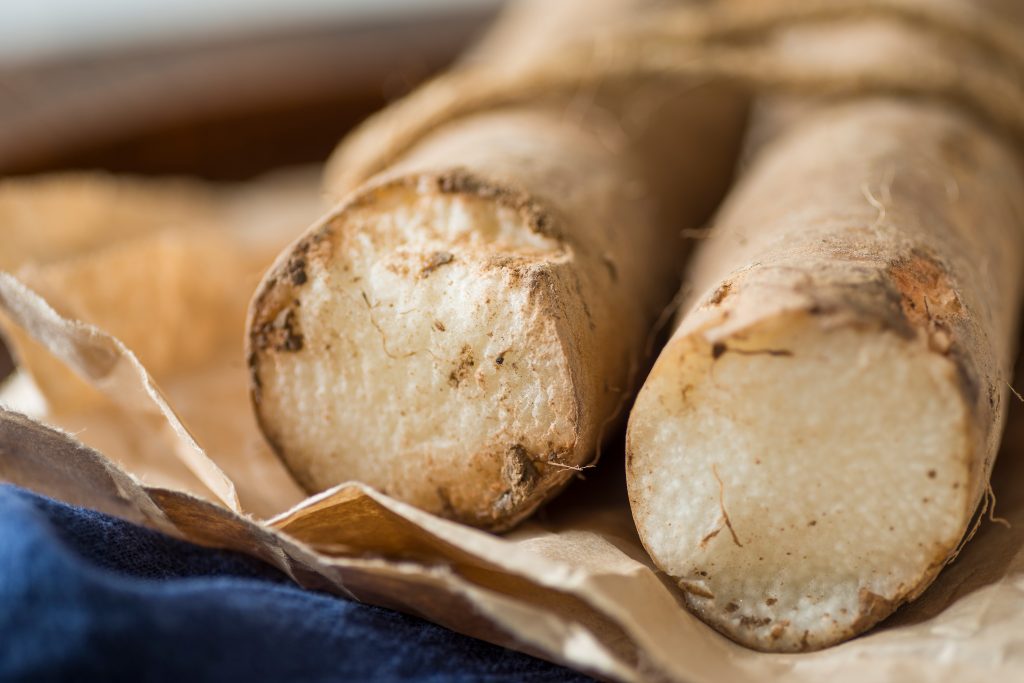 Today, long-grain rice is served as a side dish, cooked with tomatoes and other vegetables to make pilau, red rice with sausage, Hoppin’ John (rice with black-eyed peas and other ingredients), okra rice, rice with beans, and a delicious assortment of other variations.

Charleston can claim that the queen of she-crab soup began in the Holy City in the early 1900s, at least that’s what its historical tour guides say. There’s no dispute that the female crab meat is sweet and that its red-orange roe (eggs), thick cream and a dash of sherry is packed with bisque-like flavor.

Frogmore, a small unincorporated community on St. Helena Island, boasts proudly of its Frogmore Stew, or Lowcountry Boil. This savory dish of shrimp, corn on the cob, redskin potatoes, onions and anything else a cook wants to add traces its roots to the 1960s.

Several states lay claim to originating Brunswick Stew, but undisputed is that it’s firmly entrenched as a Lowcountry classic. This hearty comfort food mixes an assortment of meats (chicken, pork, beef, and rabbit), vegetables and seasonings for flavor and color.

While not as well known as its sister stews, Chicken Bog stands out as a porridge for its unique combination of chicken, rice, onions and sausage and as a hand-me-down recipe from generations ago.

The origin of grits can be traced to Native Americans from the woodlands who would grind corn in a stone mill to create its gritty texture. Early writings from Gullah descendants of slaves describe a meal resembling shrimp and grits, and it’s been rooted firmly as a native breakfast food in the Lowcountry marshes along the coast for hundreds of years. These days, shrimp and grits also are served at lunch and dinner, and few diners can pass up melted cheese mixed in and topped with gravy.

Gooey and delicious lobster mac and cheese is universally adored as a comfort food and is found everywhere in the Lowcountry as a side dish at lunch or dinner.

Some say to credit the French for introducing Charleston to its incredibly sweet Huguenot Torte confection in the late 1600s after the Holy City’s founding. The cakelike concoction combines apples and nuts and gives a glowing nod to a crustless apple crisp. Others say it’s derived from Ozark Pudding. Wherever it originated, it’s safely at home in the Lowcountry.

Directions [1] In a large saucepan over medium-high heat add the butter. Once melted, add the carrot, celery, and onion. Cook until carrots are cooked through. [2] Stir in the base, Paul Prudhomme blackening spice, hot sauce, sherry, and lemon juice. Cook for an additional 5 minutes. [3] With the stick blender, process the mixture. Process until well incorporated, still leaving tiny bits of carrot. [4] Next whisk in flour until well incorporated. Transfer to large pans to cool properly. Once cooled, transfer crab soup base to appropriate container, date, label, and store. [5] In a large sauce pot, add 2 quarts heavy cream and 2 quarts of whole milk. Over medium high heat, bring the liquid to the boil. [6] Once dairy has come to the boil, quickly remove from heat and whisk in one cup of crab soup base (or more to reach your desired thickness.) [7] Return to the stove on low heat and whisk frequently to prevent burning. Once soup has thickened, season to taste with salt, pepper, sherry, and lemon. NOTE: This recipe has been converted from a large batch recipe, so not all of the base may be necessary in accordance with the 2 quarts of cream and 2 quarts of milk. 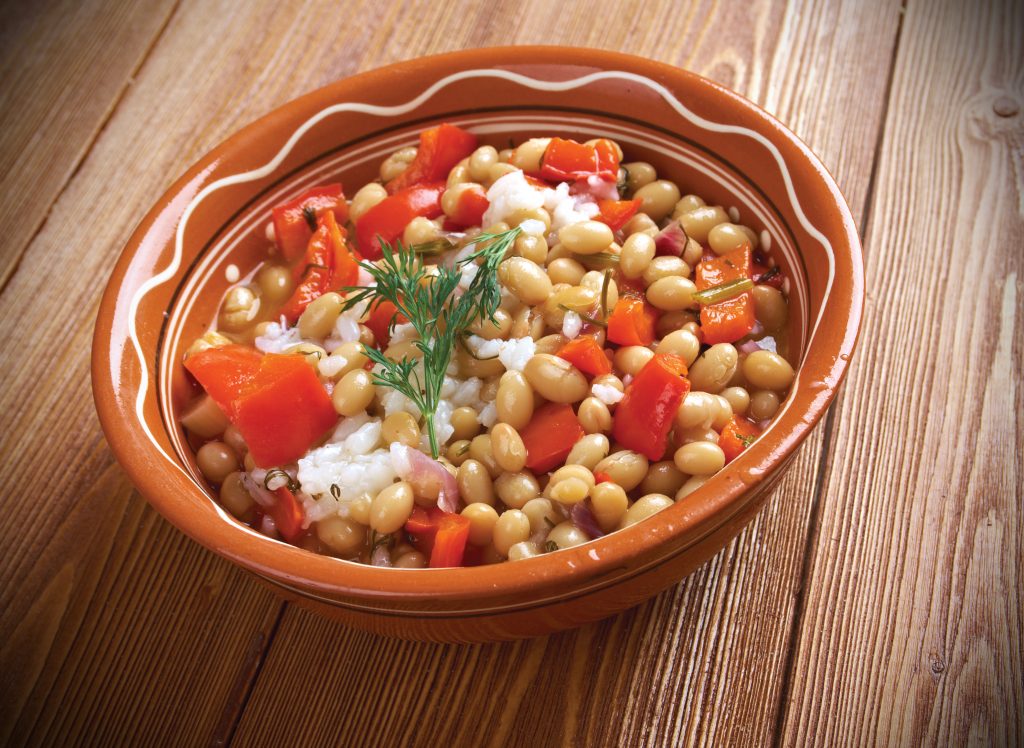 Directions [1] In medium sauce pan, heat olive oil, add carrots, celery. Add onion; cook about 10 minutes when onion is translucent, then add garlic and mushrooms and cook mushrooms until they are golden brown. [2] Add tomatoes, smoked paprika, turmeric, cayenne, chili powder, veggie stock and fresh black-eyed peas to the pan. Bring mixture to a simmer over medium heat, then cover and cook until peas are just tender. Remove the lid and continue to cook until liquid has reduced to half. Season with salt and pepper to taste. [3] Serve over steamed rice, garnish with scallions. 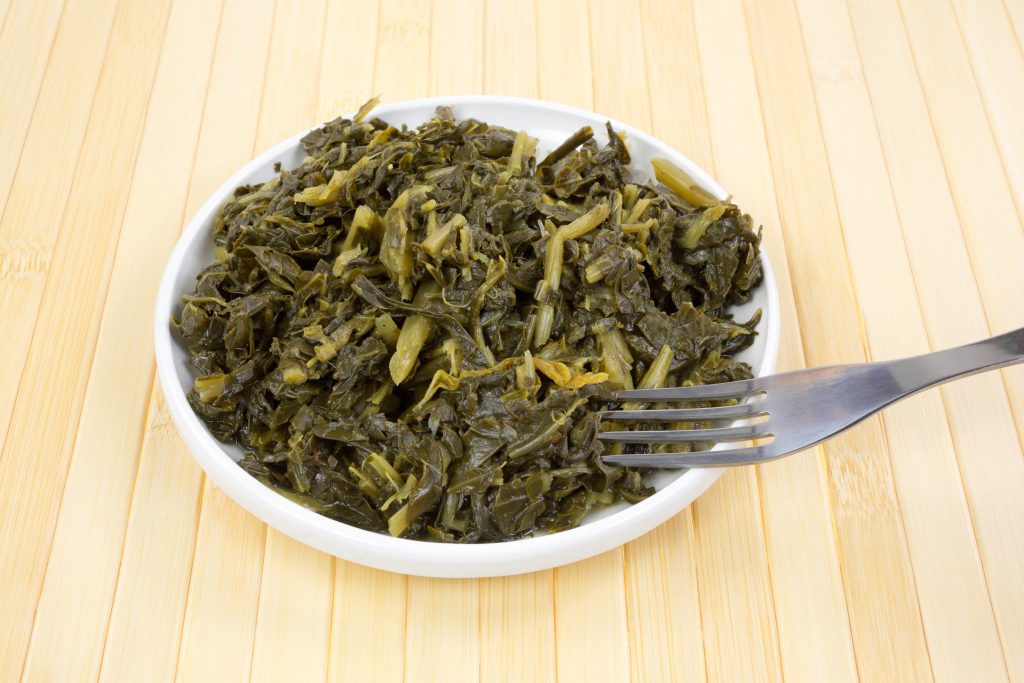 Directions [1] Coat a large, deep skillet or pot with olive oil. Sauté onions until golden brown, then add garlic and red pepper, simmer until tender and fragrant, about 2-3 minutes. [2] Add in veggie stock. Season broth with red pepper flakes and smoked salt. Taste and adjust seasoning if needed. Bring to simmer, then reduce heat. [3] Add in the greens (greens will wilt down as they cook). Simmer 30 minutes to an hour, depending on desired tenderness. Add more smoked salt, black pepper, and red pepper flakes if desired. 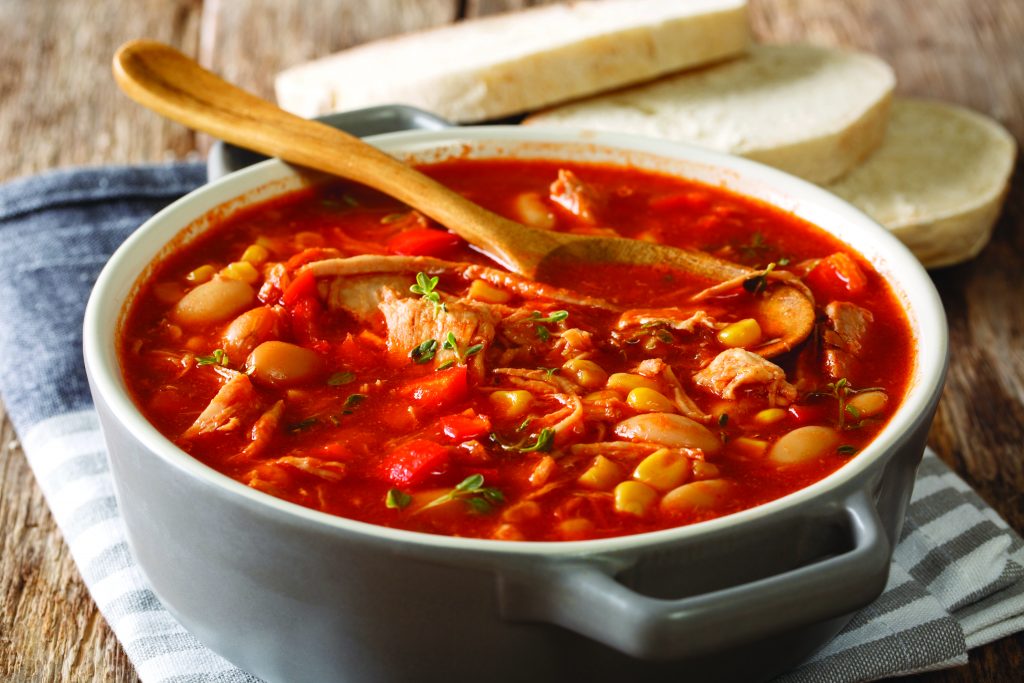 Directions [1] In a large pot over high heat, combine the salt pork, chicken and water and bring to a boil. Reduce heat to low, cover and simmer for 45 minutes, or until chicken is tender. [2] Remove chicken and allow to cool until easy to handle. Remove meat and discard the skin and bones. Chop meat into bite-sized pieces and return to the soup. [3] Add the potatoes, onions, tomatoes, corn, lima beans, Worcestershire sauce, salt and ground black pepper. Stir well and simmer, uncovered, for 1 hour. 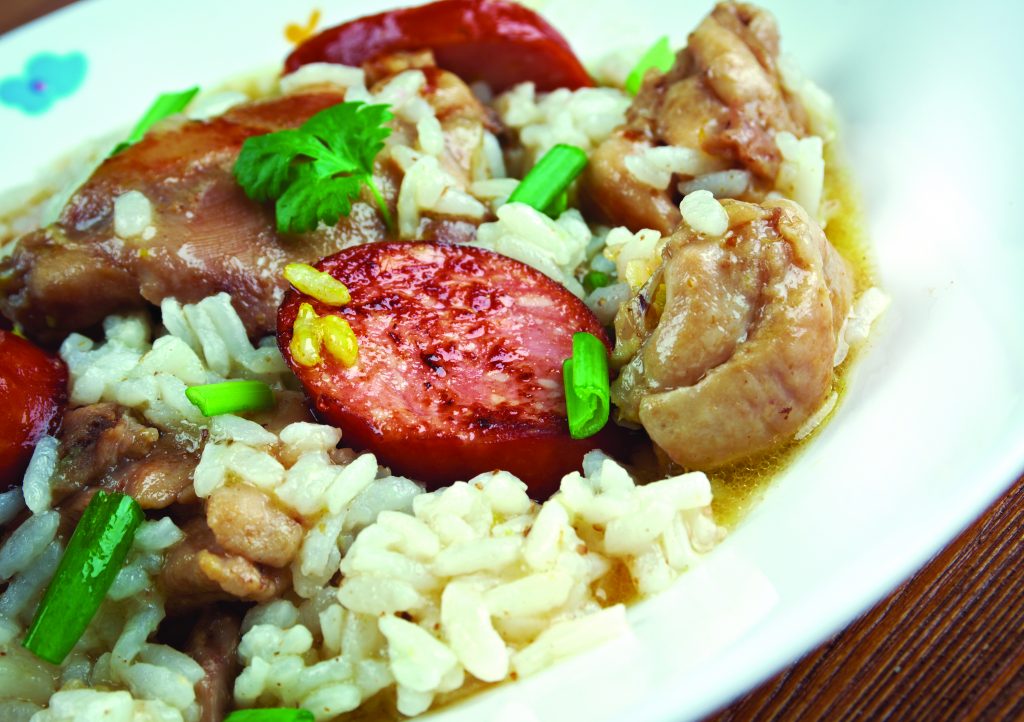 Directions [1] Place water, salt and onion in a large pot. Add chicken and bring all to a boil; cook until chicken is tender, about 1 hour. [2] Remove chicken from pot and let cool. Remove skin and bones and chop remaining meat into bite-sized pieces. [3] Skim fat from cooking liquid and measure 3 1/2 cups of this chicken broth into a 6-quart saucepan. Add rice, chicken pieces, sausage, herb seasoning and bouillon to saucepan. Cook all together for 30 minutes; bring to a boil, then reduce heat to low, keeping pan covered. If mixture is too watery, cook over medium low heat uncovered until it reaches the desired consistency. Stir often while cooking.