When it comes to chocolate, less is more. But don’t worry – we’re not talking about serving size.

“A lot of over-the-counter chocolate will have waxes and fillers in them. If you have ‘paraffin wax’ listed, or the first ingredient is ‘hydrogenated palm kernel oil,’ that technically is not real chocolate,” says Nancy Paris, co-owner of the Chocolate Canopy with her husband, Christopher. “Not all chocolate is the same.” 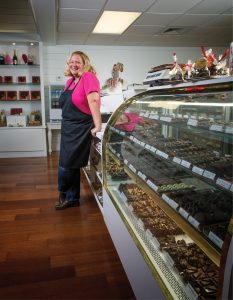 That simple truth is the difference between a truly melt-in-your-mouth cocoa-based treat, and something whose flavor profile only vaguely resembles its namesake.

If you’re eating chocolate (note the lack of quotation marks around the word), then “chocolate” should always be the first ingredient listed on the package, Paris says. By that she means the delectable combination of sugar, chocolate liquor – the chocolate base that’s extracted from the cocoa bean – and cocoa butter. “That’s pretty much as crazy as we get. There might be a dash of vanilla in there or a dash of a thickening agent called soy lecithin, but that’s it,” she says. “We’re very transparent with what’s in there.”

Unfortunately for white chocolate fans, that means you’re a fan of something that’s totally misnamed.

“There are no chocolate solids in white chocolate, so white chocolate technically, in a legal term, is not chocolate,” Paris says. The list of ingredients in the white chocolate base Paris uses to create the ivory confections some patrons prefer makes it clear: “Sugar, partially hydrogenated palm kernel oil and cottonseed oil, nonfat dry milk, artificial flavors.” The word “cocoa” doesn’t even make a cameo.

“It isn’t as popular as the milk and dark chocolate,” Paris says of the pale imposter, as if to reassure that Hilton Head islanders are a discerning bunch whose refined tastes naturally bend toward authenticity.

The Hilton Head shop has been open since 1982 and owned by the Parises for the past three and a half years.

“Hands down we have the best job on the island. No question,” says Paris, who also owns Hilton Head Candy Company in Coligny Plaza. “Technically we make chocolate for a living, but what we really do is make people happy.”

The Chocolate Canopy offers a wide variety of milk and dark chocolate treats and truffles to suit every taste. The difference between milk and dark, Paris explains, is simply the amount of cocoa used.

While the store is not “bean to bar,” the Parises purchase a chocolate base from a manufacturer that gets most of its cocoa beans from the Ivory Coast. They temper the chocolate on-site to create the various molds and treats, like the gooey caramel-layered Lagoon Goo and their famous chocolate gators.

Their most popular items are the sea salt caramel, followed by milk and dark chocolate pecan turtles. “Everything else sells a close third.”

So don’t worry if you wander in this month to select a gift for your sweetheart and are a bit overwhelmed.

“A lot of gentlemen come in the store and look a little bewildered, they say, ‘I don’t know what to get.’”  Paris says. “And we always joke with them, ‘Pressure’s off, there’s not a bad decision in the store.’”