This stunning Spring Island home sees the Lowcountry through the lens of a famed New England designer.

Nancy Serafini already had established herself as a highly sought-after interior designer in Nantucket when she first ventured to South Carolina 20 years ago. Like so many of us, she found that something about the Lowcountry kept calling her back for visit after visit, until six years ago when she and her husband, Joe, decided to make the leap and buy their own piece of paradise.

“We looked at Bray’s Island, Palmetto Bluff, Charleston, Savannah, but we kept going back to Spring Island,” said Nancy. The only thing stopping her was that every lot she could find in Spring Island was wooded, and she was holding out for something on the water.

They say good things come to those who wait. The lot that would become the Serafinis’ home went on the market, boasting nearly 360-degree marsh views and a very famous pedigree. “This had been Arnold Palmer’s lot,” said Nancy. The story goes that the golfing legend was offered his pick of spots on Hilton Head Island, but his wife didn’t like the island. “But when he came to Spring Island, he bought this lot because he fell in love with it. “ 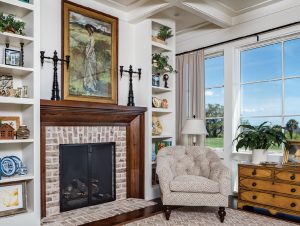 The Serafinis fell in love with it as well. “That speaks to my sense of Lowcountry – reeds, marsh, green grasses, blue sky. It’s never ending,” she said.

On this stunning marshfront lot they built a house that takes the traditional Lowcountry aesthetic and puts a decidedly New England spin on it.

“When we got started, my husband said to me, ‘Nancy, you may have to hire another interior designer because this isn’t your style.’ Everything here seemed so different, the color palette, the furniture. I took it upon myself to look outside my window and draw inspiration from nature,” she said.

The marsh beyond her windows informed a color palette that bridges the gap between New England and the Lowcountry. Muted and understated, yet reflective of the world around it, the home’s interior gleefully blends Southern coastal elements like shiplap and industrial elements with a Yankee cottage feel, evidenced by colorful patterns and antique furniture.

SETTING THE SCENE
Balancing out the natural colors found throughout, neutral tones in the serene owner’s suite let the scenery stand on its own.

“I wanted warmth. Instead of building a house, I wanted to build a home. The way to achieve that is through mixing colors, textures and patterns,” she said. Her 45 years of design work informed the interior, while her relationship with architect Joel Newman helped create the distinctive profile of the exterior. One of the signature elements of the home’s profile is its massive wall of windows gazing out toward the marsh, something Nancy credits Newman with.

“The way Joel designed it, it was a stepping stone to the outside,” she said. 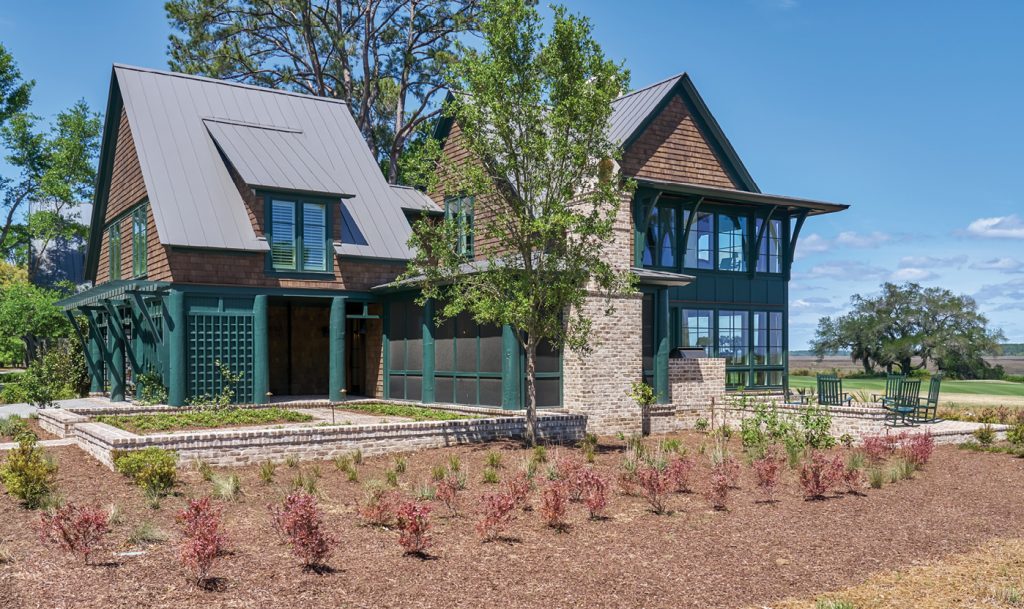 And of course, Newman was on hand to offer his expertise in the Lowcountry aesthetic. “Joel ultimately came to love the house, even though he’d look at the color palette and the wall-to-wall carpet and say, ‘We do not do this in the Lowcountry.’ I’d just say, ‘Well, it’s my house,” she said with a laugh.

And that’s true in every sense. By fusing her years of experience designing beautiful New England homes with her love of the Lowcountry, Nancy Serafini has made a house that’s uniquely hers.