This glorious gourd is ready for harvest.

It’s time to sip pumpkin spice lattes, nibble on pumpkin cheesecake and carve jack-o’-lanterns. More than 1.5 billion pounds of pumpkins are grown every year in the U.S. and, depending on the type, pumpkins are typically ready to harvest by mid-fall. The Atlantic Giant can grow up to 12 feet long and weigh more than 1,800 pounds, while others, like the Winter Luxury, are much smaller and pack a sweet and tasty punch. Several varieties grown in the Lowcountry are ideal for carving (Autumn Gold, Ghost Rider, Howden, Jack-o’-Lantern, Magic Lantern, Merlin and Spirit) and for making pie (Amish Pie and Small Sugar). For decorative uses, there are plenty from which to pick– large Big Max and Big Moons and novelty Baby Boo, Jack Be Little, Lumina and Prizewinners. For where to find a batch, or a patch of your own, read on.

Pumpkins are not vegetables. They are a fruit classified as berries that are made up of 94 percent water. Relatively low in calories and incredibly nutrient-dense, they contain several antioxidants, including alpha-carotene, beta-carotene and beta-cryptoxanthin, which have been linked to reducing the risk of chronic diseases. Pumpkins also contain vitamins A, C, and E, lutein and zeaxanthin, which have been shown to help prevent cataracts and age-related macular degeneration.

How to grow a golden crop

Pumpkins require full sunlight, take several months to grow and reach maturity anywhere between 70 to 120 days. The seeds should be planted sometime after the last frost of the season, and the plant should receive about an inch of water once a week, providing a deep soak. Since pumpkins are heavy feeders, a vegetable garden fertilizer is recommended. No need to prune the vines though, as the leaves will help produce more carbohydrates, which will produce plentiful plump pumpkins.

Where to buy them

Inside every pumpkin you’ll find multipurpose seeds. But what can you do with the slimy, stringy stuff? If you place it in boiling water with other vegetables and spices, you’ll create a pumpkin stock perfect to use for casseroles or soups. If you’re feeling extra crafty, you can do what early American settlers did. Dry out the pumpkin shells, cut them into strips, and weave them into mats. 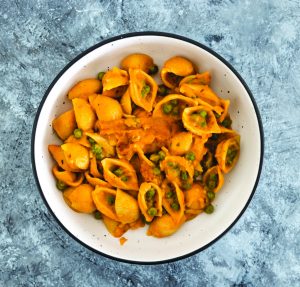 Salt and pepper, to taste

Directions [1] While waiting for your pasta water to boil, add two minced cloves of garlic and a tablespoon of butter to a large skillet over medium heat. Sauté for 1-2 minutes. [2] Add in pumpkin puree and vegetable broth and stir until combined. Add peas, nutmeg, salt and pepper and let sauce simmer over medium-low heat while the pasta cooks. [3] Once the pasta is done cooking, add Half & Half to skillet and stir. [4] Stir in drained pasta to the sauce and serve.

Salt and pepper, to taste

Directions [1] Heat oven to 350 degrees. Wash pumpkins and cut off the tops, scraping out the seeds. [2] Lightly brush the insides with olive oil and place the tops back on. Place pumpkins on a baking sheet lined with parchment paper and bake for 40 minutes or until tender. [3] In a large skillet over medium heat, add olive oil and onion. Cook for five minutes and add bell pepper, mushrooms and garlic. Cook for another five minutes.  [4] Add in the quinoa and cook for one minute, coating in olive oil. Add in the vegetable broth and cook for 20 minutes. [5] Stir in nutritional yeast and cooked chickpeas. Cover to keep warm.  [6] When pumpkins are tender, remove from oven and add in quinoa mixture. Top with parsley and other desired herbs.

Directions [1] Heat oven to 350 degrees. Grease donut pan and set aside.  [2] In a large bowl, whisk together flour, brown sugar, salt, baking powder and pumpkin pie spice. [3] In a separate bowl, whisk together pumpkin puree, 1 cup milk and 5 tablespoons butter. Fold into the dry mix. [4] Add mixture into donut pan and bake for 10 minutes. Allow to cool for 5 minutes. [5] Mix together sugar and cinnamon in a bowl and melt 6 tablespoons butter in a separate bowl. [6] Coat the donuts in melted butter, and then roll in the cinnamon-sugar mixture. [7] For the cream cheese drizzle, mix together cream cheese, 4 tablespoons milk, vanilla extract and powdered sugar. Drizzle over each donut. Makes 12.