Do what you know.” It’s a quintessential piece of advice to anyone looking to start a new project or embark on a journey to reconnect with themselves. For self-described

CheFarmer (chef and farmer) Matthew Raiford, looking back on his own history inspired a mission to capture a collection of Gullah Geechee recipes. As homage to his family’s history, Gullah Geechee culture and the fertile land on which both were established, Raiford’s book compiles a list of recipes that incorporate produce from the Carolinas, Georgia and Florida. Bress ‘n’ Nyam: Gullah Geechee Recipes from a Sixth-Generation Farmer takes inspiration from Raiford’s professional endeavors around the United States, but is grounded in the rich culinary tradition of his ancestors. CheFarmer Raiford brought his expertise back to the South, and he is set to be a part of the Hilton Head Island Seafood Festival in February as a Celebrity Chef in the Master Class Series. Before you have the chance to sink your teeth into his food in 2022, get to know the man behind the apron and hear more about how his book came to life.

SAVE THE DATES
FEBRUARY 21-27
Hosted by the David M. Carmines Memorial Foundation, the Hilton Head Island Seafood Festival is a celebration of the Lowcountry’s fishing roots and culinary heritage. Get a taste of the South from the region’s finest pitmasters, chefs and mixologists. Join Chef Matthew Raiford and other celebrity chefs and pitmasters at events throughout the week. hiltonheadseafoodfestival.com.

Raiford and his sister grew up in the coastal Georgia region where they learned about local farming and how its spoils contributed to Gullah Geechee cooking. Raiford joined the military for a few years before successfully completing a degree from the Culinary Institute of America in New York. Since then, he went on to receive an ecological horticulturist certification from the University of California. Ecological horticulture is a study of how cultivating plants can benefit and sustain local ecosystems. Eventually Raiford was drawn home to take on the operation of a family farm back in Georgia.
While in the area, he has served as the program coordinator and as an associate professor of culinary arts at the College of Coastal Georgia. Raiford opened a restaurant in the historic downtown region of Brunswick called The Farmer and the Larder where his culinary creations took center stage. The space has now become a hands-on cooking space and small-events venue where Raiford leads classes and shares his love of his ingredients. 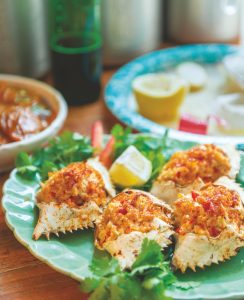 Looking back on how he ended up in the same town in which he began, Raiford credits his family’s heritage and a connection to their farm. “The stewardship of our land that has been overseen by us for over 150 years is what brought me back home. I have cooked in every country and state I have lived in and have always seen similarities in the foods and their convergence on the plate. Traveling has truly expanded my palate!”

To say this chef’s work is close to home is an understatement. Since 2011 Raiford has run an organic farm in Brunswick, Ga., with his sister, Althea Raiford. This sibling duo is the sixth generation in their family to operate this farm since it was founded in 1874 by their great-great-great grandfather, Jupiter Gilliard. One of the goals of the farm is to cultivate affordable and fresh food for people in the local community. The rural setting of Brunswick makes it a great place to run a farm, but the Raiford siblings make an effort to turn their produce into something that does good for others. Gilliard Farms is a part of Georgia Organics, SAAFON (SouthEastern African Americans Farms Organic Network) and Farms to Grow.
Being able to produce organic and clean food for their neighbors, the Raifords have had the chance to see the impact of their work in the lives of those around them. The experience of working his family’s land day in and out has greatly influenced Matthew Raiford’s philosophies on both cooking and living.
“Farming is life-long learning. The moment you have everything dialed in, Mother Nature gives a roaring laugh and teaches you how to be resilient and learn something new,” Raiford writes. Whether a harvest does not come out as planned or the weather takes a sharp turn, nature always has the last laugh. Surely, those who work on the sea will agree with this as well. 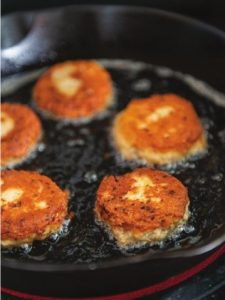 The Gullah Geechee cuisine in Raiford’s book covers recipes that range from buttermilk biscuits and sweet potato pie to salmon cakes and Gullah fish stew. The recipes find sources from both land and sea but share in a common history and connection to place. Raiford gushes that he has always “seen the seafood along the Atlantic Coast as being the best tasting seafood with an amazing amount of salinity especially in our oysters.”
Before he heads up to Hilton Head in the winter for the annual Seafood Festival, CheFarmer Raiford shares a few seasoned words of wisdom when it comes to preparing seafood that has been freshly harvested in the area. “Seafood is delicate and does not need to be overly seasoned or over-cooked. Never be in a rush. Don’t forget to cook with your heart, and let it come through your hands!”
Whether you are ready to get your shrimp on in February or want to try some of Raiford’s recipes with your own family, take a look for Bress ‘n’ Nyam: Gullah Geechee Recipes from a Sixth-Generation Farmer on Amazon or at Barnes & Noble.
Chef Matthew Raiford’s kitchen essentials for cooking seafood
Local Life